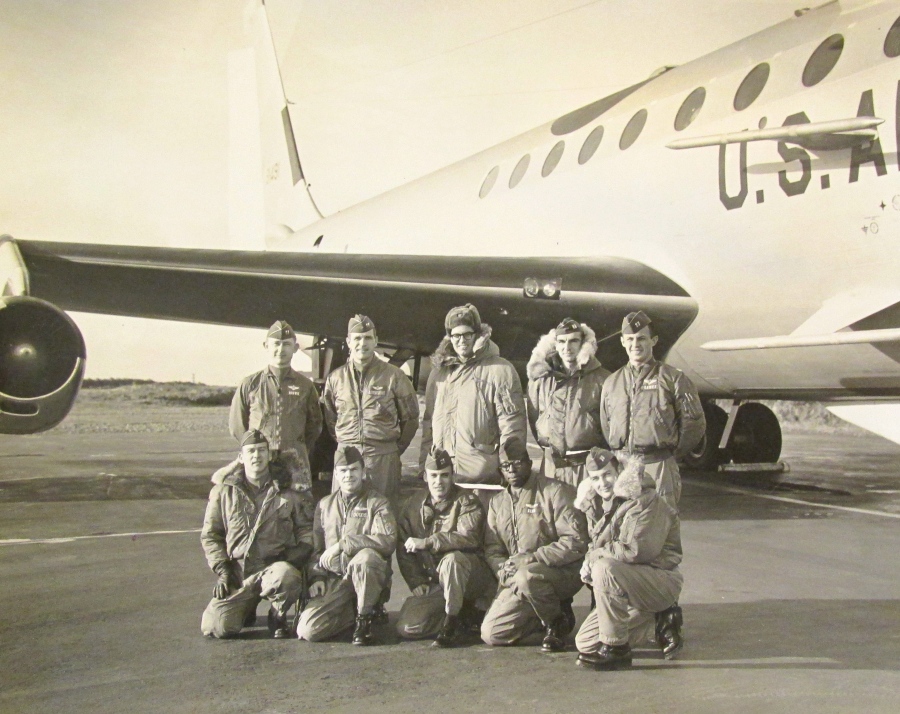 The crew of the “Cobra Ball,” a photo reconnaissance plane the U.S. Air Force used to take pictures of Russian ICBM missiles reentering the atmosphere during the ‘Cold War” in the 1960s. Capt. Russell Howard is the fellow in the parka second from the right in the second row. Photo provided

Retired Air Force Lt. Col. Russell Howard of Port Charlotte, Fla. began his 22 year career in the military as a young ROTC 2nd lieutenant who became an electronics warfare officer. In the beginning he flew aboard a Strategic Air Command B-52 “Stratofortress” flying out of Robins Air Force Base in Warner Robins, Ga. preparing for Armageddon.

“All we did was train and fly ‘Chrome Done Missions’ out of there,” the 80-year-old aviator said. “On ’Chrome Dome Missions’ we spent 24-hours in the air training. We’d fly from Robins Field to New York, out into the North Atlantic and head for the Mediterranean. We’d orbit the Mediterranean. It was our point for us to be if war started. Then we’d fly home.”

Half a century later he recalls one training mission in particular.

“During these 24-hour flights we’d change positions. Because I knew something about flying I ended up flying the plane,” Howard recalled. “I was in the aircraft commander’s seat. The co-pilot was supposed to be flying the plane and I was to help him out.

“The commander was sacked out on a collapsable bunk. The co-pilot had dozed off in the seat next to me. With the B-52 on autopilot I was the only one watching the gages and controls,” he said.

A fully-loaded B-52 ready for war had enough explosive power aboard to vaporize a number of large cities.

“We had two AGM (televised-guided) bombs on our wings and four more atomic bombs in the bomb bay,” the former Air Force officer remembered. “We flew in tandem with another B-52 on this training exercise.

“The other bomber I realized was getting smaller and smaller as it flew ahead of us and to our left. I also realized we had to catch up, so I reached over and gently nudged the throttles forward a bit.
“About the same time I had to change our radio frequency to call in our location. I called it in without a hitch.

“On our airplane I could get no one to answer our intercom. I tried to get the navigator on several occasions but he was apparently asleep. We also had three pilots aboard, but they were all asleep.

“I was the only guy awake in our plane!

“By this time we had flown by the B-52 we were flying in formation with. I eased back on the throttles because if I did anything quickly with the throttle the airplane would cut off autopilot and I’d be flying the plane,” Howard explained.

“I knew I was going to catch hell for our plane being out of position as we flew pass the other bomber. Strangely there wasn’t a word about our position coming from the other plane. Then I realized there wasn’t anyone awake in the other B-52 either.

An RC-135E, converted tanker climbs into the sky from Shemya Air Force Base in the Aleutian Islands off the coast of Alaska. The plane had a highly classified radar system used by the U.S. Air Force to spy on the Russian missile program. Howard flew as an electronic warfare officer aboard this plane. Photo provided

“After two or three hours our co-pilot finally woke up. I guess our navigator woke up about the same time, too, and they started piloting the plane again, We all flew back to Robins Field without a hitch.

“At one point I think I was the only guy aboard those two B-52s who was awake during the exercise.”

From the SAC base in Georgia Howard was sent to the Air Force Reconnaissance School. After graduation he was assigned to Eielson Air Force Base some 20 miles outside Fairbanks, Alaska.

“I became an airborne spy,” he said. “My first mission was a flight aboard a converted RC-135S ’Cobra Ball’ tanker the Air Force turned into a photo reconnaissance plane. Basically what we were doing was taking pictures of Russian missiles when they reentered the atmosphere. It was our crew that first spotted the Russian multiple reentry vehicles—MERVS.

“My job was to watch the Russian radar. I would watch it lock onto the missiles as they reentered the atmosphere,” Howard explained. “We had eight high resolution cameras that tracked the Russian missiles, too.”

All of this secret information collected by his team of Air Force sleuths was sent on to Wright Patterson Air Force Base in Dayton, Ohio for analysis.

Eventually Howard and his crew flew out of Shemya Air Force Base in the Aleutian Island Chain off the Alaskan coast. Some times he flew on the “Cobra Ball” and at other times he was part of the crew of a highly classified RADAR plane designated RC-135E—“Rivet Amber.”

“We lived in the hanger with the airplanes. When ever we got word the Russians had fired an ICBM we were ready to go and in the air within minutes head for the Russian coast,” Howard said. “Within an hour we could be in position to track the Russian missile.”

This was taking place in 1968 in the middle of the “Cold War” with the Soviet Union. The most harrowing experience he had while sleuthing for the Air Force was during a flight on the photo reconnaissance plane. 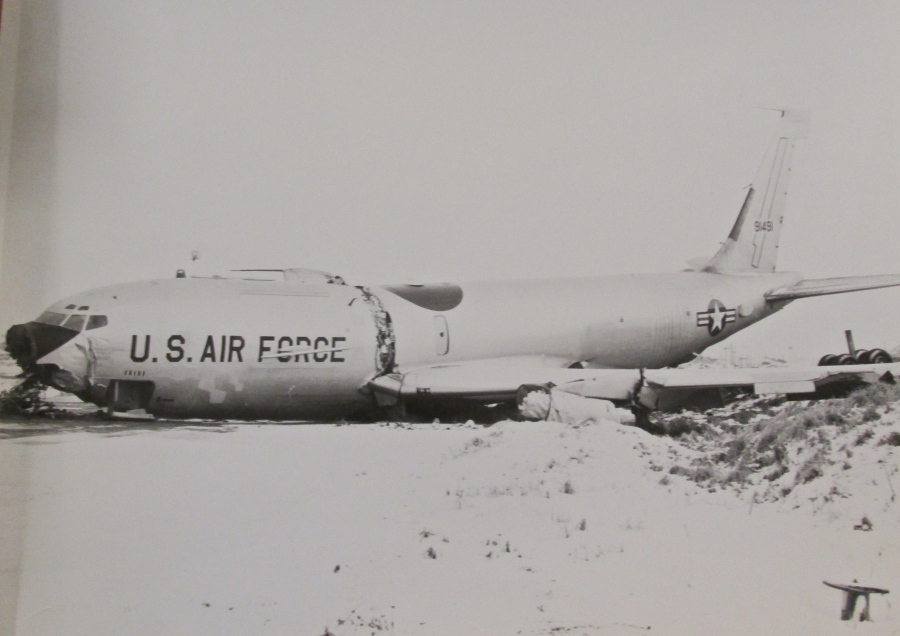 It was a close call for the crew of “Cobra Ball” when it skidded off an icy runway at Shemya and down a 40-foot embankment. Neither Howard nor any of the other crew-members were injured in the crash. Photo provided

“We flew back from a mission on a Sunday. The runway was iced over and were battling a strong cross wind while trying to land. I looked out of one of the photo ports and saw our hanger as we passed by at 70 knots,” he said. “By that time we should have slowed down and started to turn and stop, but we hadn’t slowed down.

“The plane ran off the end of the runway and down a 40 foot embankment. The pilot and cockpit crew scrambled out the door in the front. The rest of us got out the back door of the airplane. I slid down a rope and hit the ground running. I didn’t know if the plane would blow or not. We were lucky, it didn’t.”

After Alaska Howard was stationed at Offutt Air Force Base in Nebraska, headquarters for the Strategic Air Command. He was part of an airborne headquarters crew that flew with a general aboard. It would take charge of SAC operations if an enemy attacked the U.S.

He was promoted to lieutenant colonel while serving as head of tanker operations for the Air Force on Okinawa. From there it he went on to Carswell Air Force base near Fort Worth, Texas where he became the operations and plans officer for the base.

It was from this base Howard retired as a lieutenant colonel in 1980 after more than two decades of military service.

He moved to Port Charlotte in 1999. He has three grown children: Sean, Lisa and Dianne.

This story was first published in the Charlotte Sun newspaper, Port Charlotte, Fla. on Monday, Oct. 19, 2015 and is republished with permission.