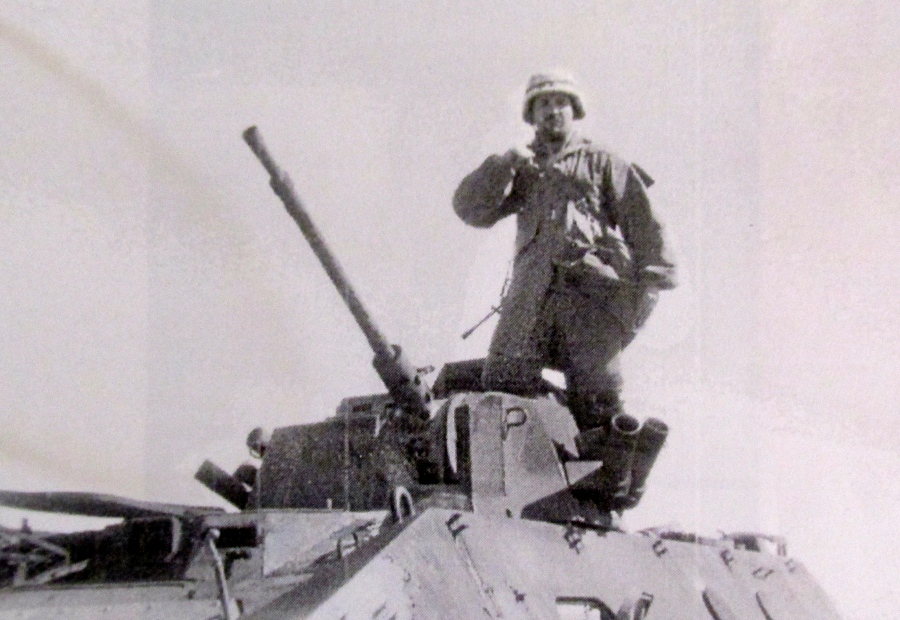 The old, white, steel Army helmet was chipped and battered. It didn’t look like much.

But to former Army Staff Sgt. Mike Herman of Southwest Florida, the Iraqi helmet, taken as a war souvenir during Operation Desert Storm a dozen years ago in Iraq, almost cost him his life. During the war, he drove an 18-wheel ammunition flatbed truck as a member of the U.S. 623rd Transportation Company attached to the 18th Airborne. 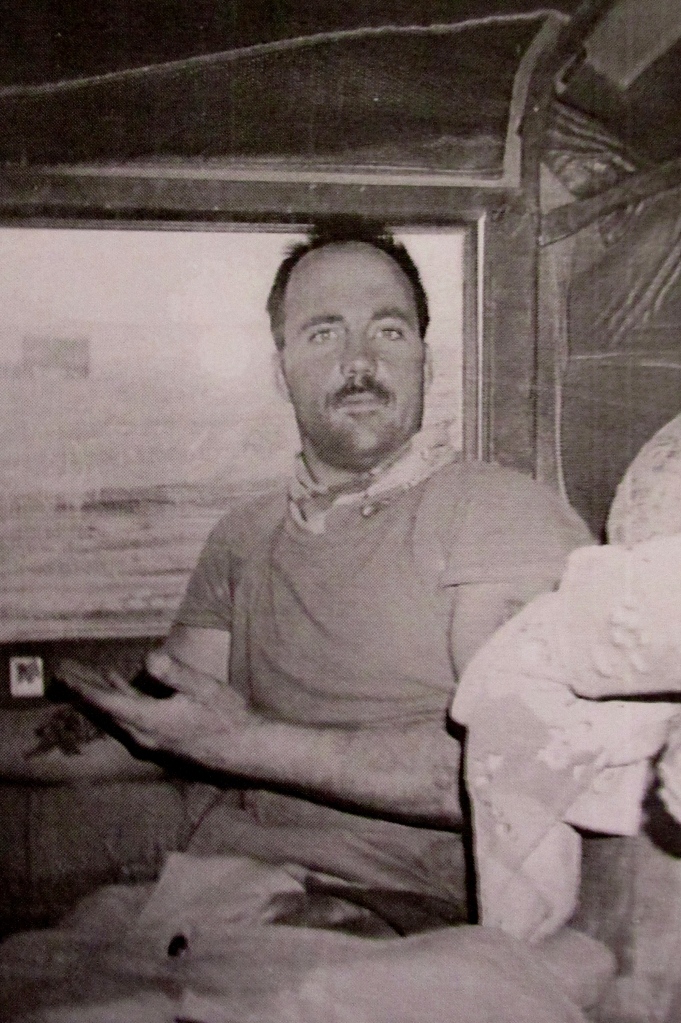 Sgt. Herman sits in the cab of his 18-wheel flatbed truck he used to haul ammunition in Desrt Storm more than a decade ago. Photo provided

“I was a reservist called to active duty during the Gulf War in 1991,” said Herman, 43. “We were the first reserve unit to go to Iraq.”

His unit was activated in November 1990. It returned to the United States in mid-May 1991.

In the seven months he was in the Middle East, much of it in Iraq, Herman and his unit spent a considerable amount of time at or near the front lines, delivering tank, multiple launch rocket systems and ammunition to the troops.

“We drove the shells to the front on flatbed trucks over the desert at night with almost no visibility,” he said. “It was strapped down on skids on the back of our trucks. Often times, going through the desert, the stuff would break loose and fall off. We couldn’t stop to pick it up because we were in a convoy. We had to keep going.

“One time, in late February 1991, we had been driving through the desert for two-and-a-half to three days loaded with ammunition on our flatbeds. It was the middle of the night and I was chewing dust and thinking, ‘I’d like to see something.’ A few minutes later, all of a sudden, there were thousands of Iraqi soldiers walking on both sides of our convoy who had surrendered and were going back to their homes. We didn’t have the heart to tell them there was a good possibility their homes had been destroyed in the war. 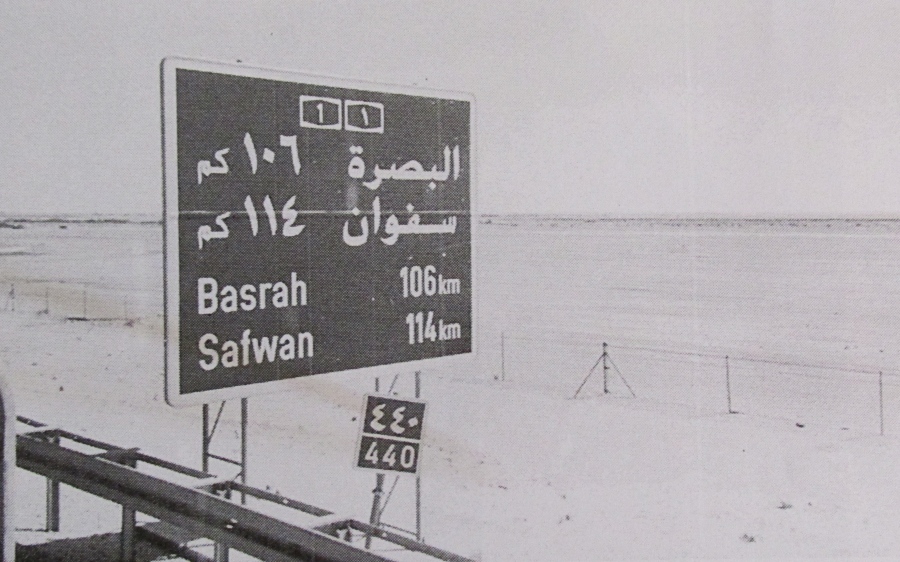 The road sign along Highway #8 in Iraq notes that Basrah is 106 kilometers up the road. This is the site of the biggest tank battle since World War II. American M-1 A-1 tanks wiped out the Russian-built tanks the Iraqis used. Photo provided

“Farther on, we were still going though the desert and we were told the Iraqis had called for a cease-fire. We stopped the convoy, got out of our trucks and were just standing around,” he said. “Then the Iraqis started firing shots over our heads. A short time later, an Iraqi truck came zooming toward us — probably a suicide bomber — which we quickly knocked out.”

At this point, U.S. armor let go. M-1 A-1 tanks and MLRS, multiple launch rocket systems, blasted enemy positions. Herman said they hadn’t even noticed the American tanks off to the side about 60 feet away from the convoy because they were dug in the sand and half hidden.

“When our guys cut loose, everybody in our unit started running. But then we realized it wasn’t incoming fire,” he said. “Fireworks lit up the sky, and our tanks did what was needed.

“We finally reached Highway 8, a six-lane road major thoroughfare running through the desert, after all that time in the sand,” he said.

There was smoke and fire, burning cars and trucks and thousands of dead people stretching a mile or two in front of them.

“The battle had just gotten over. I’ll never forget the smell of burning flesh. We had to weave our way through the wreckage and the dead along Highway 8 with our trucks,” Herman said. “When we finally made our way through, we stopped and took a break and tried to regroup. It was still night and we had been driving most of the time for nearly three days.”

When morning came, Herman and the convoy were still resting in their trucks. He spotted a knocked-out car up in front of him on the highway. Herman decided to investigate. 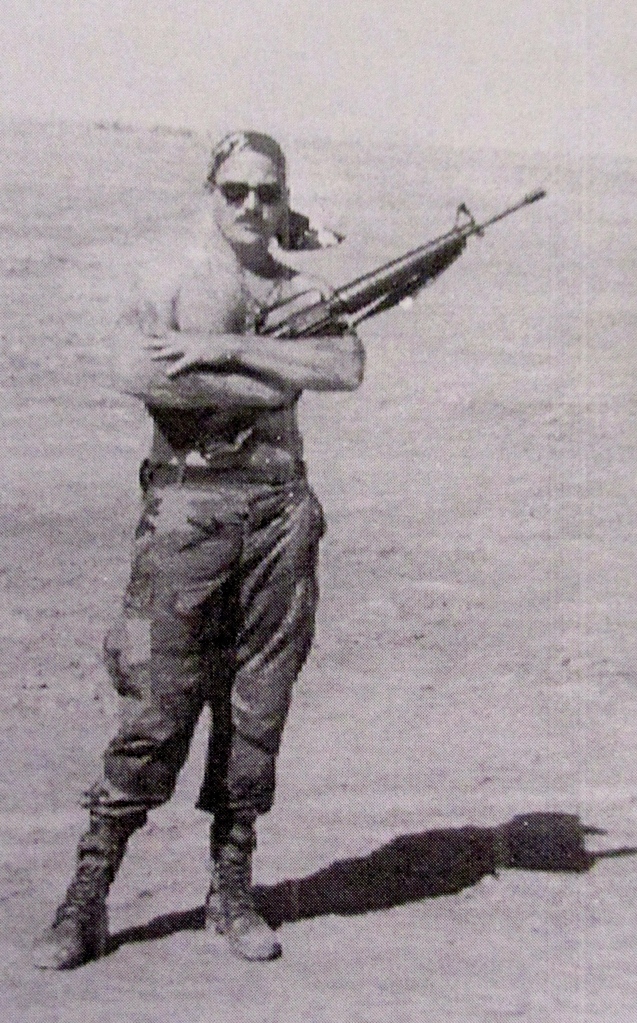 He cradles his M-16 rifle as he poses for the camera during a break in the Iraqi desert in 1991. Photo provided

“I took my M-16 (rife) with me. I was wearing Army green fatigue pants and a tan desert camouflage top with a purple bandana tied in a long tail over my head,” he recalled. “I didn’t know it at the time that Iraqi soldiers were wearing pieced-together American uniforms to try to get through our lines.

“I went down to the blown-up car looking for war souvenirs. When I got down there I spotted an Iraqi helmet lying on the ground near the car. I decided to pick it up and take it back with me to the truck,” Herman said.

That was a bad mistake. On the way back to his truck, he saw a couple of American tanks out in the desert a ways off the main road.

“The tankers started hollering at me. Then they started hauling tail toward me,” Herman said. “I assume they realize I am an American and they were going to come tell me I couldn’t take the helmet for a souvenir. I’m already kinda hacked off at the thought that these guys are going to bust my chops about taking a war souvenir.”

He kept walking along the road with his rifle in one hand and the Iraqi helmet in the other, not paying the tanks and the soldiers in them much attention. One of the tanks pulled up and stopped right behind him; the other one, off to one side.

“I heard one of the tankers say something. I assumed he said, ‘Throw down the helmet.’ So I took the helmet and threw it on the ground disgustedly.

“‘Halt!’ is the next thing I hear. I turned around, and both of the tankers had a bead on me with their .50-caliber machine guns mounted on top of their tanks.

“I put both my arms straight out from my sides, dropped my M-16 and yelled at them, ‘Don’t shoot! I’m an American!’

“All I was thinking was, ‘Don’t move. Don’t breathe,'” Herman said. 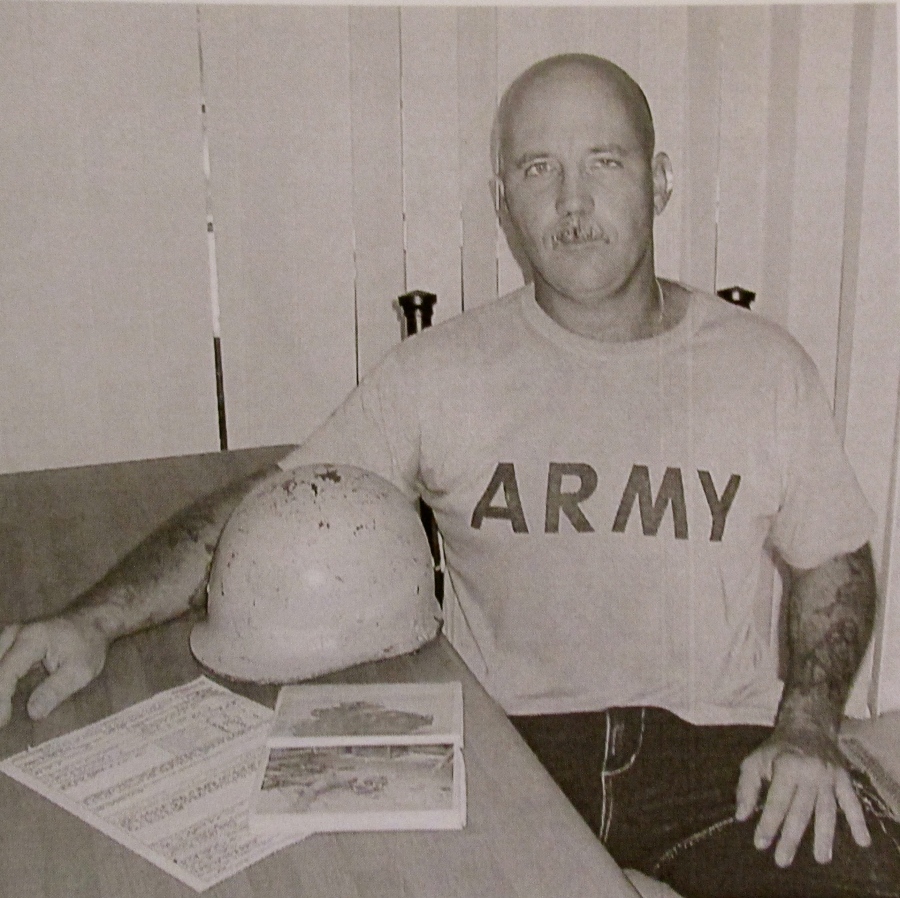 Former Army sergeant Mike Herman of Port Charlotte, Fla. is pictured with an Iraqi Army helmet he brought home as a souvenir. It almost cost him his life. With it is a photo album of pictures he took during the war and his discharge paper. Sun photo by Don Moore

When the tankers realized they had their machine guns aimed at one of their own soldiers, they apologized. They told him they thought he was an Iraqi because he had a pieced-together American uniform like the Iraqis who had been sneaking through the lines.

A few minutes later, Sgt. Herman walked back to his ammunition truck after picking up his war souvenir. Today, it’s one of his prized possessions from Desert Storm.

This story was first published in the Charlotte Sun newspaper, Port Charlotte, Fla. on Tuesday, Aug. 12, 2003 and is republished with permission.