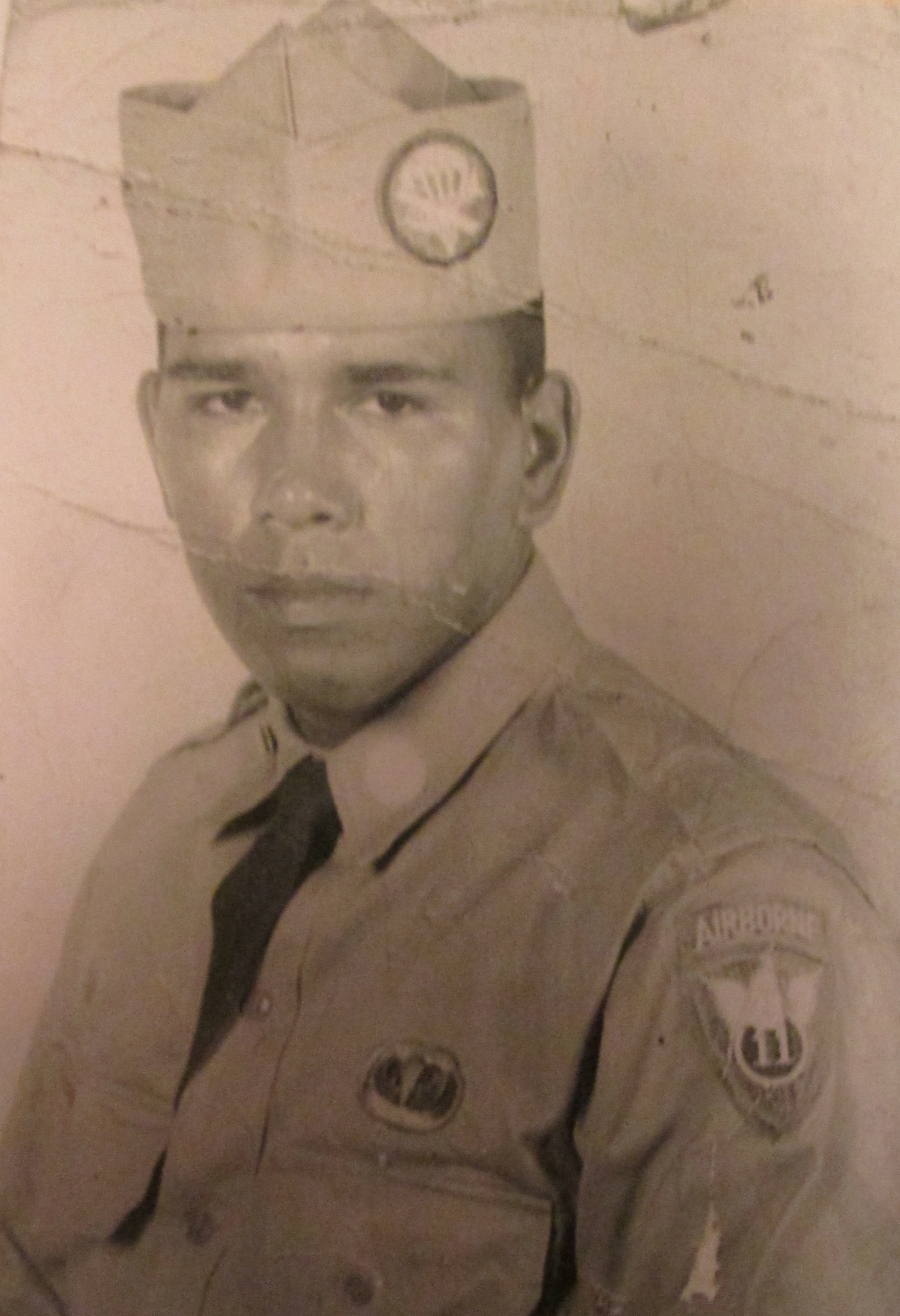 Pvt. Barney Jimerson was 21 and just graduated from Airborne School at Fort Campbell, Ky. when this picture was taken in 1955. Photo provided

“Barney” Jimerson of Gardens of Gulf Cove, south of Englewood, Fla., is a full blooded Seneca Indian, born in Elco, N.Y., He grew up, graduated from high school in the Jamestown, N.y. area and volunteered for the draft in 1955 when he was 21.

“In May 1955 I went to Fort Dix, N.J. for basic training,” he said. “After basic they gave me a choice of going to Officers Candidate School or going Airborne. I decided to go Airborne. They paid us $45 per month extra for jumping.

“When you jumped out of an airplane after your chute opened there is no other feeling like that in the whole world,” Jimerson said half a century later. “You’re looking down at a peaceful world below you as long as they’re not shooting at you.

“I ended up in jump school at Fort Campbell, K.Y. as a member of the 503rd Regiment, 11th Airborne Division. After jump training and completing five jumps to qualify our whole division was sent to Germany. It was the ‘Cold War.’

“We sailed out of New York for Europe in the middle of winter. We hit a storm in the Atlantic on the way over. Waves broke 60 feet above the ship’s deck during the height of the storm,” Jimerson recalled. Most of the soldiers aboard ship were seasick. I didn’t get seasick.

“It took us a week or 10 days to sail from New York to Bremerhaven, Germany. On the way over we sailed right past the ‘White Cliffs of Dover’ along the English coast,” he said. “When we reached Bremerhaven they put us aboard a train and sent the whole division to the Munich area.”

They were put up in World War II German barracks at Munich to begin with. Much of their time was spent on maneuvers out in the field in pup tents in the freezing cold and snow of Germany in January.

“It was -20 degrees and we were in these little tents. There were two of us to a tent. One guy would be on watch while the other guy slept inside double sleeping bags with his boots on trying to keep warm,” Jimerson said. “The snow was four-feet deep.”

Since Jimerson grew up in upstate New York, snow and cold weather were nothing new to him. He was use to this kind of winter weather.

“Our job in Germany was to see that the Russians stayed on their side of the German border. Because the 11th Division was a crack airborne unit that’s why we were sent to Germany,” he explained. “We were there to provided infantry support for our armored units.”

The soldiers of the 11th Division were told, if war with the Russians in Europe started it would be their job to jump into Budapest, Hungry and hold the line.

He was a BAR (Browning Automatic Rifle) man. He carried a heavy rifle that fire 20-shot clips of bullets. He had 24 clips in pouches in a web belt around his waist.

Jimerson said he never saw a Russian soldier while stationed in Germany. They were located three miles behind the front lines.

There were least four days, however, when the men in his division thought they were on the verge of going to war. 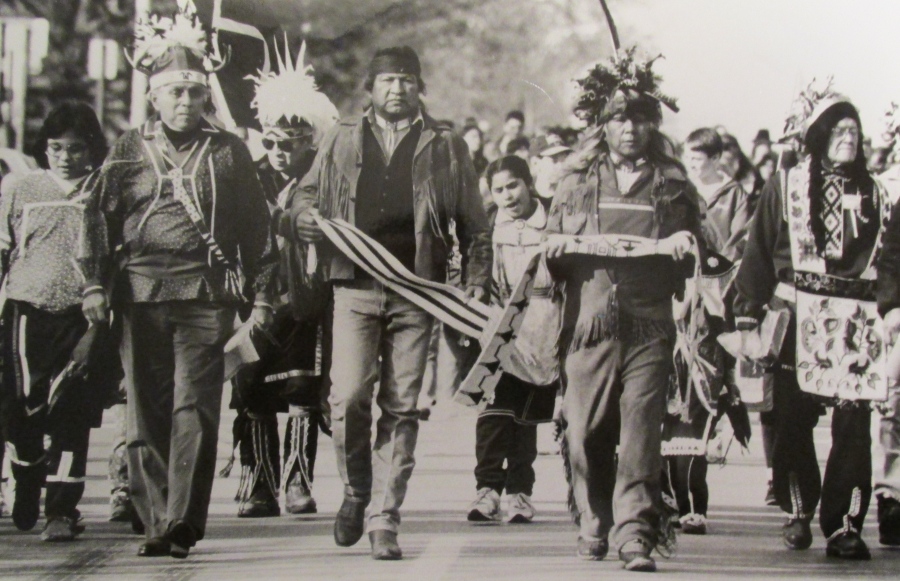 Jimerson (in the front row near right with feather head dress) takes part in a 200 year anniversary celebration of the signing a treaty between the Indian tribes in New York State and the Colonel Government. Photo provided

“We had all our equipment with us during these four days. The airplanes that would fly us into battle were sitting on the runway with their engines running,” he said. “All we were waiting for was live ammunition and we could have flown across the border and jumped into enemy territory.

“The Russians backed down and the U.S. called off its attack. We were really happy we didn’t go to war,” the 81-year-old former paratrooper said as he sat at his dining room table remembering a close call so long ago.

It wasn’t all war games for Jimerson and his buddies while in Germany. Munich is known for its great beer and beer halls. And the frauleins weren’t bad either, or so he says.

“They had the biggest beer hall in the world in Munich. In the summer and fall there were lots of festivals. During ‘Octoberfest’ me and some of my buddies had a bit too much to drink. I was a private 1st class, but I got busted back to private. Then I earned my stripes back,” he said with a grin.

After 15 months overseas he sailed back to the States and was discharged from the Army at Fort Dix, where he had taken his basic training two years earlier. 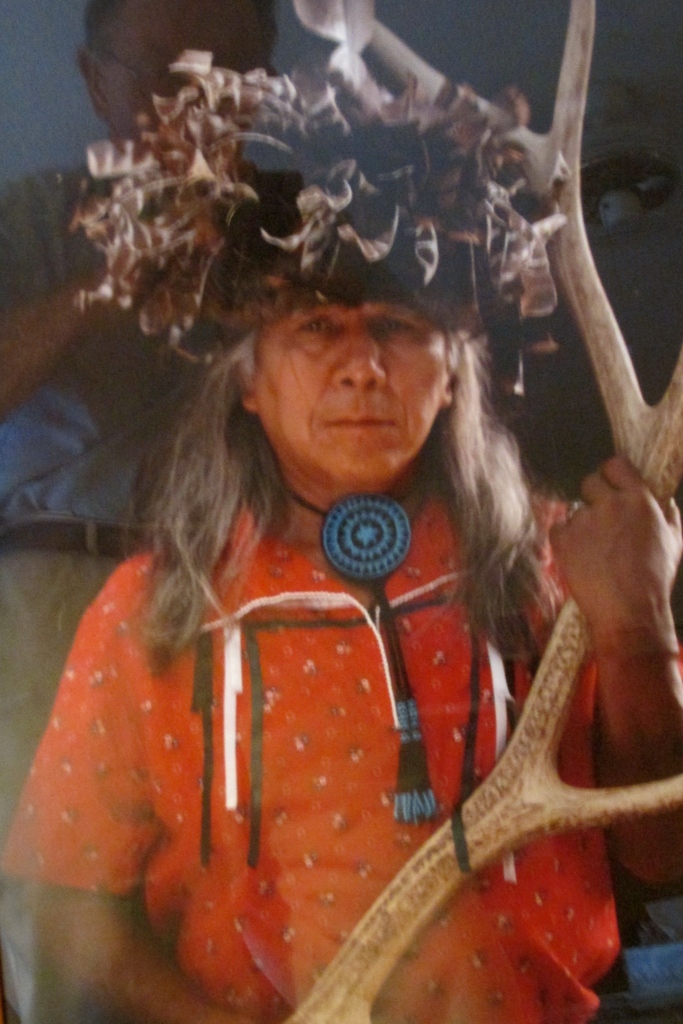 Jimerson becomes Seneca Indian photo shoot for Kodak photographers in Rochester, N.Y. after getting out of the service. He is in traditional Seneca dress holding a huge set of elk horns. Over 600 pictures were taken of him. Photo provided

For the first couple of years he worked at whatever job he could fine until he took the G.I. Bill and went to school. He was trained to keep heavy industrial machinery operating. Jimerson spent the next 30 years working for American Can Company until he retired. He and his wife, Carol, moved to Florida in 2002.

This story was first published in the Charlotte Sun newspaper, Port Charlotte, Fla. on Monday, May 4, 2015 and is republished with permission.