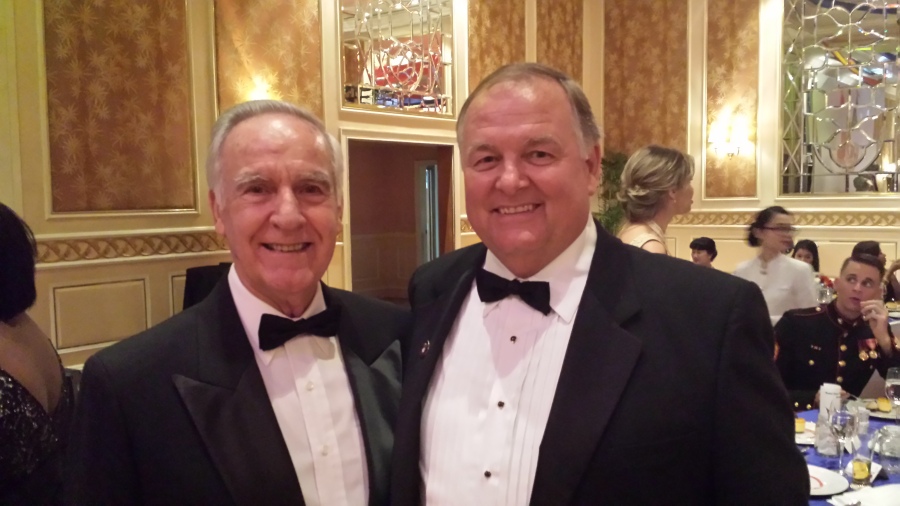 Ambassador Pete Peterson (L) and Randy Smith all decked out for the Marine Corps Ball in Saigon. Photo provided

Ambassador Pete Peterson (L) and Randy Smith of Venice, Fla. all decked out for the Marine Corps Ball in Saigon. Photo provided

Forty years after Marine Cpl. Randy Smith of Venice, Fla. lowered the flag for the last time at the American embassy in Saigon on April 29, 1975, he returned to Ho Chi Minh City on Nov. 10 to attend a Marine Corps Birthday Ball held in the South Vietnamese capital city for the first time in four decades.

When he departed the country’s capital as a teenaged Marine half a lifetime ago, Saigon and the whole country, were in ruins from decades of war. When he returned a few days ago, Saigon was a bustling city of 7 million with skyscrapers, cars everywhere and smiles from the inhabitants toward visiting Americans.

“I bet Ho Chi Minh is rolling over in his grave because Saigon is a capitalist city,” Smith said with a smile while sitting at his dining-room table. “The people are very friendly to Americans. They like Americans because we bring tourist dollars into the country.”

After a 30-plus hour flight from Tampa to Saigon he and a Marine Corps buddy, Ken Crouse, who was the speaker at the embassy ball in Saigon, completed their journey. Ken was also there to further the development of a religious effort by a group of American churches to rescue young girls from slavery in Cambodia.

Ken has flown to Southeast Asia on several previous occasions to help the ministry with its rescued girls program. Forty years ago, when Ken arrived in Saigon he only served there a few weeks when South Vietnam fell to the North.

The two old Marines took a walk around Saigon their first day in country, but nothing looked the same as it had when they were last in the town as young men.

“While in Saigon we went to the Ben Tan Market. It’s kinda like an American mall, except they have this section where butchers are chopping up raw meat out in the open. Blood is running off the meat onto the floor. It’s pretty amazing,” Smith, said.

“I had an audience with Rena Bitter, the counsel general, that afternoon. She is the senior American foreign service officer in Saigon. 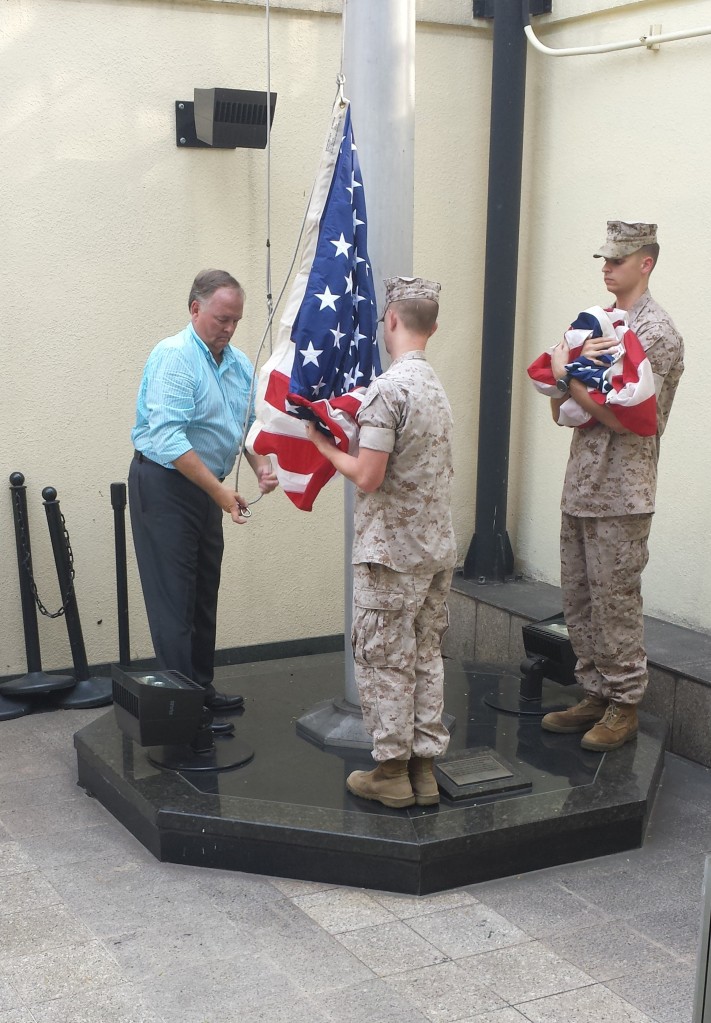 Randy Smith (L) brings down the flag at the American Consulate in Saigon for the second time during a recent trip to Vietnam to celebrate US Marine corps birthday on  Nov. 10. Photo provided

“The most emotional part of the trip for me is when Staff Sgt. David Childers, head of the Marine security detail at the consulate, allowed me to take down the American flag. The big flagpole at the consulate is the only thing left of the building that was there 40 years ago when I served there.

“I went out with a three-man detail and lowered the flag and raised a new one. We folded the flag we had just taken down into a triangle and they presented it to me. I’m going to put that flag in a special display box and give it to my grandchildren.

“On Friday, the next day, we went to a tourist area called Dung Tao. It’s a beach resort about an hour-and-a-half south of Saigon, along the South China Sea.

“Strange thing about the place, there is a statue of Jesus on a hill with outstretched arms like in Rio. Vietnam is a Communist country and they don’t like Christians. I have no idea why the statue is there,” Smith said.

“The next day, Saturday, we came back to Saigon and moved to the Sheraton Hotel where the Marine Corps Ball was going to be held. It was during the ball I got to meet Pete Peterson, the former American ambassador. I spent quite a lot of time talking to him.

“Before he was the ambassador he was an Air Force pilot who was shot down over North Vietnam in 1966. He spent seven years in the ‘Hanoi Hilton,’ (the infamous POW camp in North Vietnam). Much of that time he was locked up with Sen. John McCain, who was a Navy pilot who got shot down, too.

“Pete told me: ‘There are a number of ex-POWs who hold a grudge against North Vietnam, but I don’t. The past is the past and I don’t want to be remembered as a POW survivor.’

“He wants to be remembered at a successful businessman who became the American ambassador to Vietnam after the war. He’s a great guy and a good man,” Smith added. “I think he is right on target with his thoughts about Vietnam.” 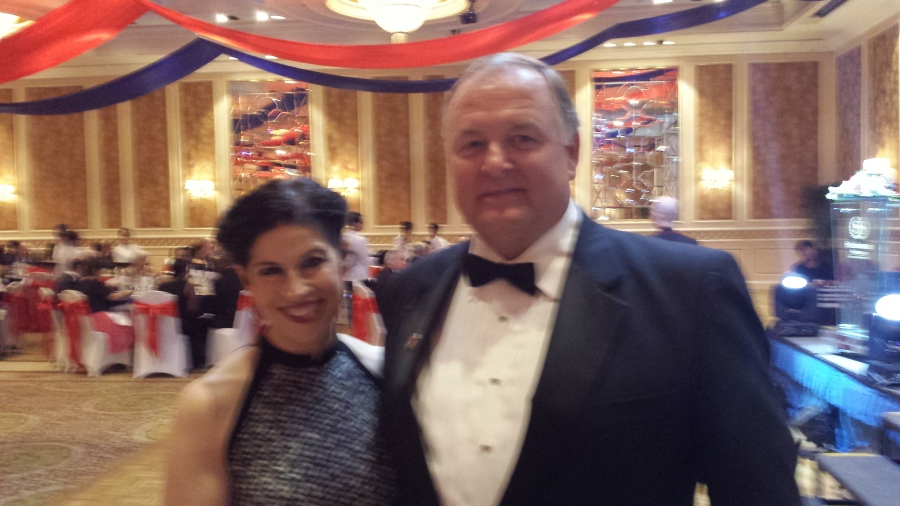 “The ball was grandiose affair and I was the only person attending who was at the last Marine Corps Ball in 1974, before the fall of Saigon, and this one. But I wasn’t the oldest Marine there this time. There was one guy who was a Marine who was 74 at this ball,” Smith said.

He and Ken drove to Siem Reap, Cambodia on Sunday to meet with a husband and wife team of missionaries who live in that primitive region. Their main effort is working with teenage girls they’ve help rescue from slavery in Cambodia. The missionaries train them to be self-sufficient so they can support themselves when they graduate from training.

“The problems these two missionaries face every day working with these girls the people back in the U.S. wouldn’t understand,” Randy observed. “Fighting child trafficking is a horrible problem in Southeast Asia.”

Back home again considering his week-long visit to the area, Smith said, “I wanted to go back over there to see how the Vietnamese people were doing after all these years. It’s amazing what the people over there have overcome. Instead of being filled with hate and bitterness, they’re trying to help their country.”

Toward that end he’s already planning another trip to Saigon.

“On April 29th and 30th I’ll be at the American Consulate for the 40th Anniversary Celebration of the Fall of Saigon,” Smith said. “There will be 17 other Marines coming over with me for that event.

“We’ll be there to put a plaque on the wall to honor Darwin Judge and Charles McMahon, the last two Marines killed in the Vietnam War. We’ll put the plaque up so they will never be forgotten for the ultimate sacrifice they made for their country.”

This story was first published in the Charlotte Sun newspaper, Port Charlotte, Fla. on Dec. 2014 and is republished with permission.