"The Green Mountain Boys," the Air National Guard's 158th Fighter Wing from Burlington, Vt.,C stand in front of one of their F-16 "Falcon" fighters while on alert at Langley Air Force Base outside Washington, D.C. after "9-11-2001." Photo provided

For almost three decades Ron Klein of Port Charlotte, Fla. was involved in some of this country’s major military actions. Too young for Vietnam, he joined the Air Force in 1977 as an 18-year-old bomb loader.

His job: Arming F-105 “Thunder Chief” fighters, F-104 “Starfighters,” A-10 “Warthog,” F-111B “Aardvarks” and F-16 “Falcons” with nuclear bombs. Klein was a product of “The Cold War” that pitted the United States against the Soviet Union.

“My first job was arming “Thunder Chiefs” at George Air Force Base in California. We called these planes ‘Thuds.’ They were a Vietnam-era airplane. They still had their Vietnam kills painted on their side.

“I retired the last active duty F-105. I turned it over to the Air National Guard. Then I helped bring in the F-104Gs before going to Plattsburgh, Ny. and a Strategic Air Command base there where I loaded FB-111s.”

The tempo at the SAC base in Plattsburgh put Klein in the forefront of the air war with the Soviets. He put atomic bombs in supersonic, swept-wing, two place F-111 bombers equipped with terrain-following radar that allowed them to hug the ground and fly below enemy radar.

“What always stuck in my mind when I first got assigned to SAC was what a weapons safety class instructor told us. He said, ‘If one of these atomic bombs went off accidentally at Plattsburgh it would dry up Lake Champlain.’ The lake is 100 miles long!

“Once every 60 days we would spend a week in the ‘Mole Hole.’ training so we would be ready to go if war broke out. The ‘Mole Hole’ had living quarters and cafeterias underground. It had everything we needed and it was 150 yards from the airplanes that were ready to go.

“One time I was on alert in the ‘Mole Hole’ and we had a scramble horn go off. I ran through the tunnel and out onto the runway just as the first FB-111 came out of its shelter in full afterburner and started down the runway. He went half way down the runway before he pulled back on the throttle and slowed down.

“I thought it was the end of the world. Later we found out it was the real thing, but they cancelled it as the airplanes came out of their shelters. It was a long night in the ‘Mole Hole’ that night,” Klein recalled.

“If those airplanes had gone ‘Wheels in the Well,’ I would have taken my four guys in a deuce-and-a-half truck and towed eight atomic bombs on a trailer covered with a tarp from Platsttburgh down the Interstate through the mountains to an airbase at Syracuse, Ny. a couple of hours away.

“If we made this trip to Syracuse there was already (Soviet) stuff coming our way. Platsttburgh was number two or three on the Soviet target list. So there would be nothing left of Platsttburgh.

“Our guys were supposed to drop their bombs on Russia and return to Syracuse. We would reload their airplanes in Syracuse and they would fly back and drop another load of atomic bombs.”

After two hitches in the service Klein got out of the Air Force and became a civilian. He and his family wanted to stay around Platsttburgh because his mother-in-law was in ill health. He ended up managing an automotive store.

He got out in 1990 just as “Desert Storm” was starting in Iraq. He couldn’t re-up and go to Iraq.

“After I was out of the service a while a friend talked me into joining the Vermont Air Force National Guard, the 158th Fighter Wing based in Burlington, Vt.–‘The Green Mountain Boys.’ They flew F-16 ‘Falcon’ intercepters.

“When 9-11 happened I was working as a volunteer firefighter and EMS captain with a unit in upstate New York,’ he said. “That day I had just put a new ambulance on the road when we got a call from Emergency Service Control and were told to take the ambulance to Ground Zero.

Former Sgt. Klein and his wife, Sharon, hold a banner a group of grade-school kids made for him at a school in Plattsburgh, Ny., where he was stationed at a SAC base for years. The flag went with him to Iraq in 2006 and 2007. Sun photo by Don Moore

“A few minutes later, when I was ready to head for New York City with the ambulance, I got another call. This time it was from the Vermont Air National Guard telling me the guard had been activated and I was to report to base as quickly as possible to get the F-16s read to fly over Ground Zero,” Klein said. “Our unit was the first unit to have F-16s flying over Ground Zero.

“For the next 500 days we had continuous 24 hour-a-day mission with planes in the air. We had two pilots and four maintenance guys on alert 24-7. Every time the horn went off we’d launch pilots to check it out.

“Our F-16s were stationed at Shaw Air Force Base when ‘Iraqi Freedom’ was going full blast. We got word ‘The Green Mountain Boys’ were going to Iraq. We went over with ‘Special Ops’ out of Polk Air Force Base.

“When I first got in the Air Force my father and uncle told me to stay out of the Marine Corps. They had both been Marines. They explained to me if you joined the Air Force you’d live in hotels. If you went in the Marines you’ve live in a hole in the ground,” he said.

“So I go to Iraq with the Air Force and where do i live? In a poorly air conditioned tent in 140 degree temperatures. On top of that, enemy mortars fell on us all the time. I asked myself, ‘What am I doing here?’

“The good thing was we could drop bombs on the enemy and help our Army and Marine Corp brothers if they got in trouble,” Klein recalled. We’d get our F16s in the air in four minutes. It took regular active duty guys 15 minutes to get airborne with their F-16s. Saving 10 minutes could be the difference between life or death for our guys on the ground.

“We stayed in Iraq 90 days and then rotated out of country. 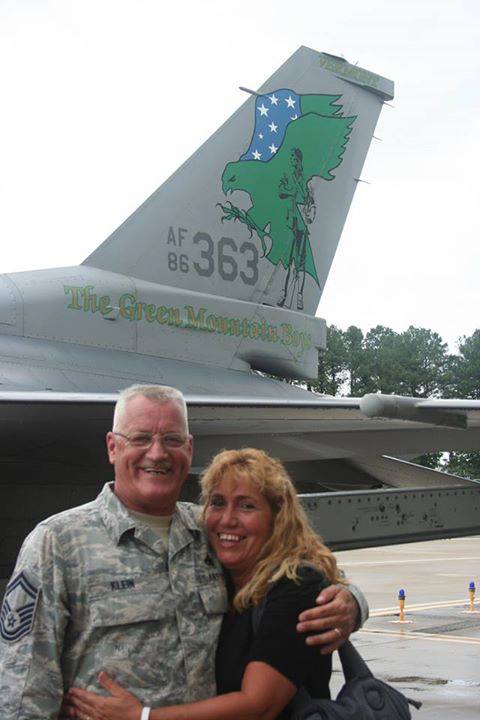 Sgt. Klein and Sharon, his wife, embrace next to an F-16 fighter jet about the time the 158th Fighter Wing was deactivated at Langley Air Fore Base in Virginia in 2013. Photo provided

“In 2007 we got orders to return to Iraq. We went back to Balad Air Force Base, Iraq, 70 miles from Bagdad. We spent another 90 days there. This time we were living in air conditioned trailers. We still had mortar rounds dropping on us, but this time conditions were a lot better.

“We were getting ready to come home when our commander called us together and told us we wouldn’t be returning to Shaw Air Force Base. We would be going to Langley Air Force Base outside Washington, D.C.”

They stayed on alert at Langley until 2013. Then they deactivated the operation at Langley. No more planes would be ready to fly at a moment’s notice in case of an attack on the country.

“My last year in the service I served as the Armament Systems Superintendent for the Air National Guard. I retired from the service May 31, 2014 after 28 years, Klein said. “We moved down here the same year.”

The couple has three children: Jennifer, Ronald Jr. and Tricia. They have 10 grandchildren.

This story was first published in the Charlotte Sun newspaper, Port Charlotte, Fla. on Monday, Dec. 15, 2014 and is republished with permission.