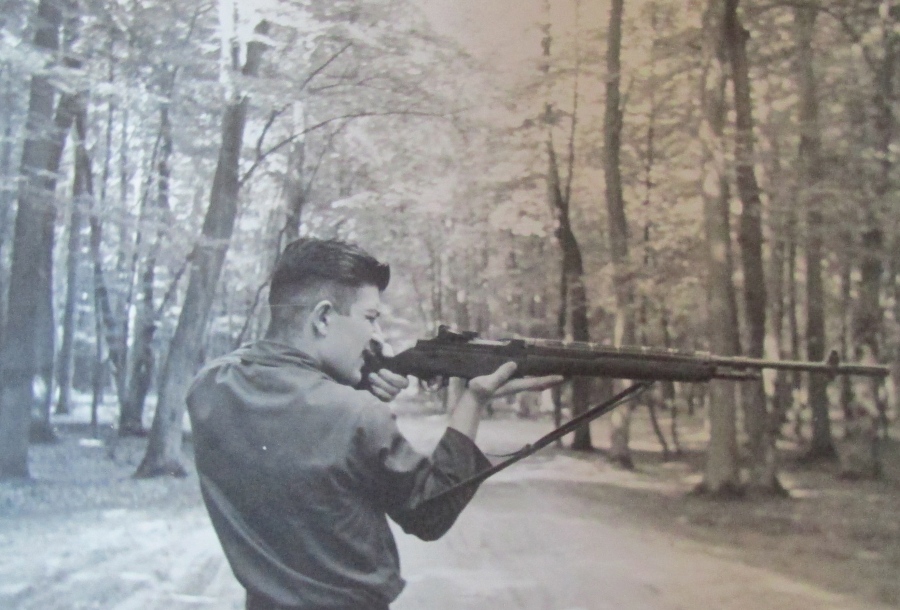 Pfc. John Ardolino is flanked by a couple of buddies. The trio served in Company B, 25th Signal Battalion in Germany during the “Cold War” of the early 1960s. Photo provided

John Ardolino of Burnt Store Marina, south of Punta Gorda, Fla. served a couple of years as a member of Company B, 25th Signal Battalion in Germany during the early 1960s. He and his buddies strung telephone lines from the command center to the front lines if war broke out.

The closest he came to war was a flipped 2 1/2 Army truck in 1961 and the “Cuban Missile Crisis” that President John F. Kennedy quelled in ’62 during the “Cold War.”

After basic at Fort Dix, N.J. he was sent to Fort Gordon, Ga. in the Signal Corps and learned to set telephone poles and string wire. Then he went to Germany to serve the final two years of a three year hitch in the Army.

“They put me on a troop ship and we sailed from New York Harbor across the Atlantic in 10 days during the winter,” the 72-year-old former Army private first class said. “We came into Bremerhaven and took a train to the the 25th Signal Battalion stationed in Karlsruhe, north of Munich.

“Four months of the year we lived in four story Nazi barracks made of stone. The other eight months we were in the field on maneuvers living in 10-man tents. We had cots and sleeping bags that got dirty and you didn’t want to get into after a couple of weeks. If it got cold we heated the tent with a kerosene stove.

This was the 2 1/2 Army truck that flipped killing one of Ardolino’s Army buddies and injuring him. Photo provided

“On Nov. 1, 1961 we were out on maneuvers stringing wire–five of us. We had a 2 1/2 ton truck and were on our way back from the field and stopped in a local restaurant to get something to eat,” he said. “When we left the restaurant our team chief wanted to drive and got behind the wheel of the truck. I don’t think we went 3/4 of a mile in the cold when our leader couldn’t negotiate a curve and the truck flipped after running off the road.

“Three of us were in the back. We’d flipped a coin to see who was going to get the warm spot and sit in the center with each one of us on either side. Tommy Holbrook won the toss and was in the center. I was on one side of Tommy and another buddy was on the other side.

“When the truck turned over a heavy .50 caliber steel machine-gun mount in the back of the truck pinned me down. The same mount hit Tommy in the head and killed him. My other buddy was thrown clear of the truck and only suffered a broken ankle. The two guys in the front of the truck weren’t hurt.”

Ardolino ended up in the hospital for weeks recovering from a severe gash on one leg and a broken bone in his other leg. When he was released he was put on light duty for a few months until he could get back on his feet.

“I was still in the Army and under their thumb. I couldn’t write her back and tell her anything without being reprimanded by my superiors. I never answered her letter. I still feel bad about that.

“After 40 years I went to the Veterans Administration to have me leg check out. They told me my records showed the only injury I suffered in the accident was a broken nose. I had no leg injuries.

“It took a lot of paper work and time. I had to go to the VA’s district headquarters in St. Petersburg for the appeal. After the hearing the VA bumped my claim up from 10 percent to 40 percent.

“It was only because I had the facts and stayed with it that the VA did anything for me,” Ardolino explained.
“While I was over in Germany in the Army the Cuban Missile Crisis was the big deal in October 1962. It really hit the fan while we were over there.

Ardolino (center) and several of his friends get their picture taken with an Army helicopter that flew into their area. Photo provided

“We couldn’t go on leave away from the base. They also issued us live ammunition when we were on guard duty and that was a big thing,” he said.

“One night during the crisis while I was hanging out at a local beer hall near base this German waitress who spoke English told us, ‘I hope your families experience the bombing we had to endure during World War II. I hope you get yours like we got ours.’

“We were shocked at what she said. I don’t think we left her a tip.

“During the missile crisis you could feel the tension in our outfit. We were told to be ready for anything.”

As fast as the incident began it was over in 13 days. President John Kennedy blockaded Cuba with war ships. Russian President Nikita Khrushchev sent JFK a letter diffusing the incident when he wrote he would pull the Soviet missiles out of Cuba if the U.S. would pull its missile out of Turkey. They agreed and that was that.

“After three years of service in the Army I was sent home by ship to New York and discharged from the Army at Fort Hamilton on Staten Island on Sept. 10, 1963. Eventually I joined the New Jersey Sate Police and spent eight years with them until I was injured in an auto accident.”

After he was discharged from the state police he and his wife, Diana, moved to Burnt Store Marina in 1978, the same year he was released by the police because of his medical disability.