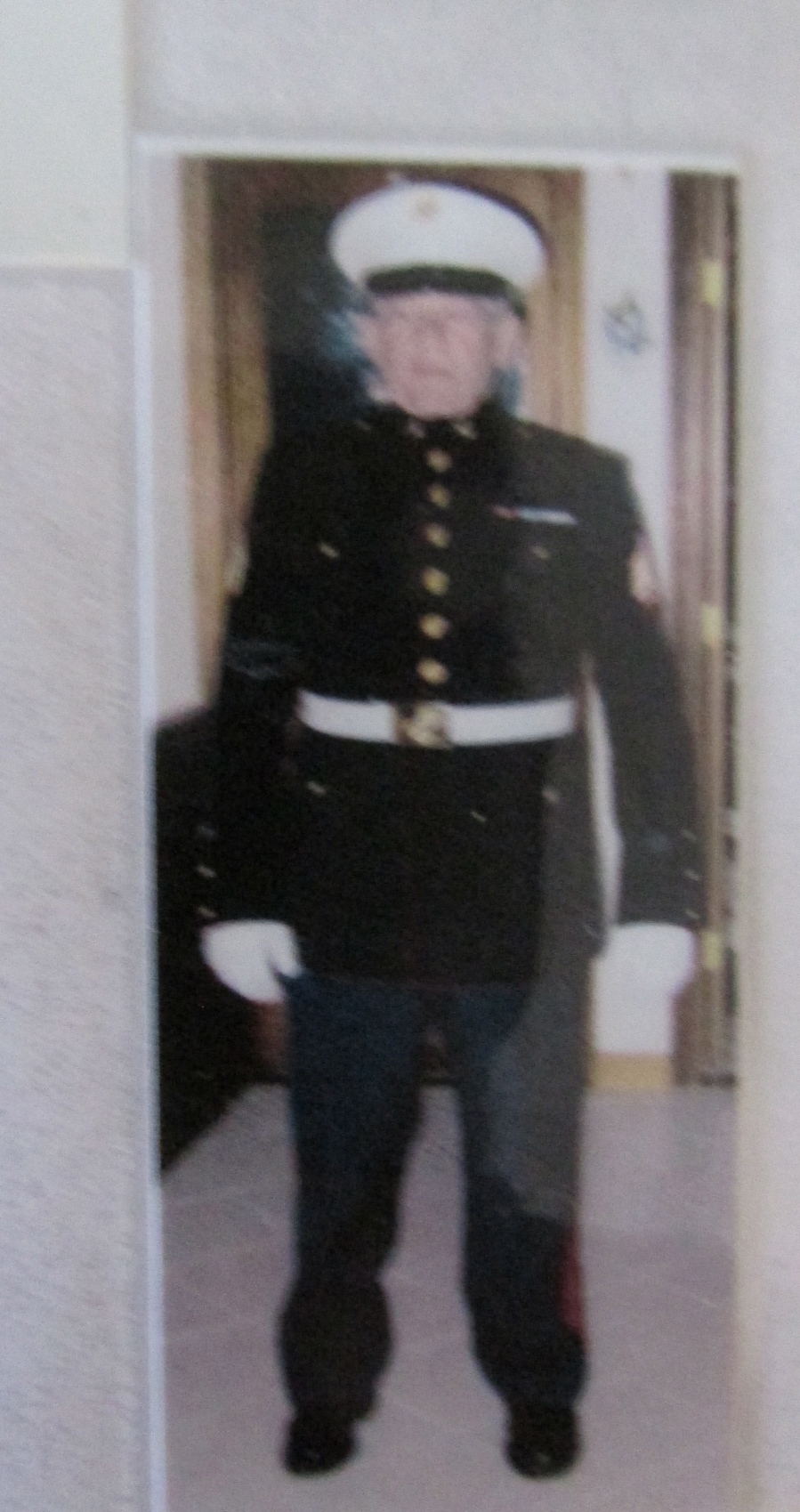 At 75 Cote in clad in his Marine Dress Blues. Photo provided 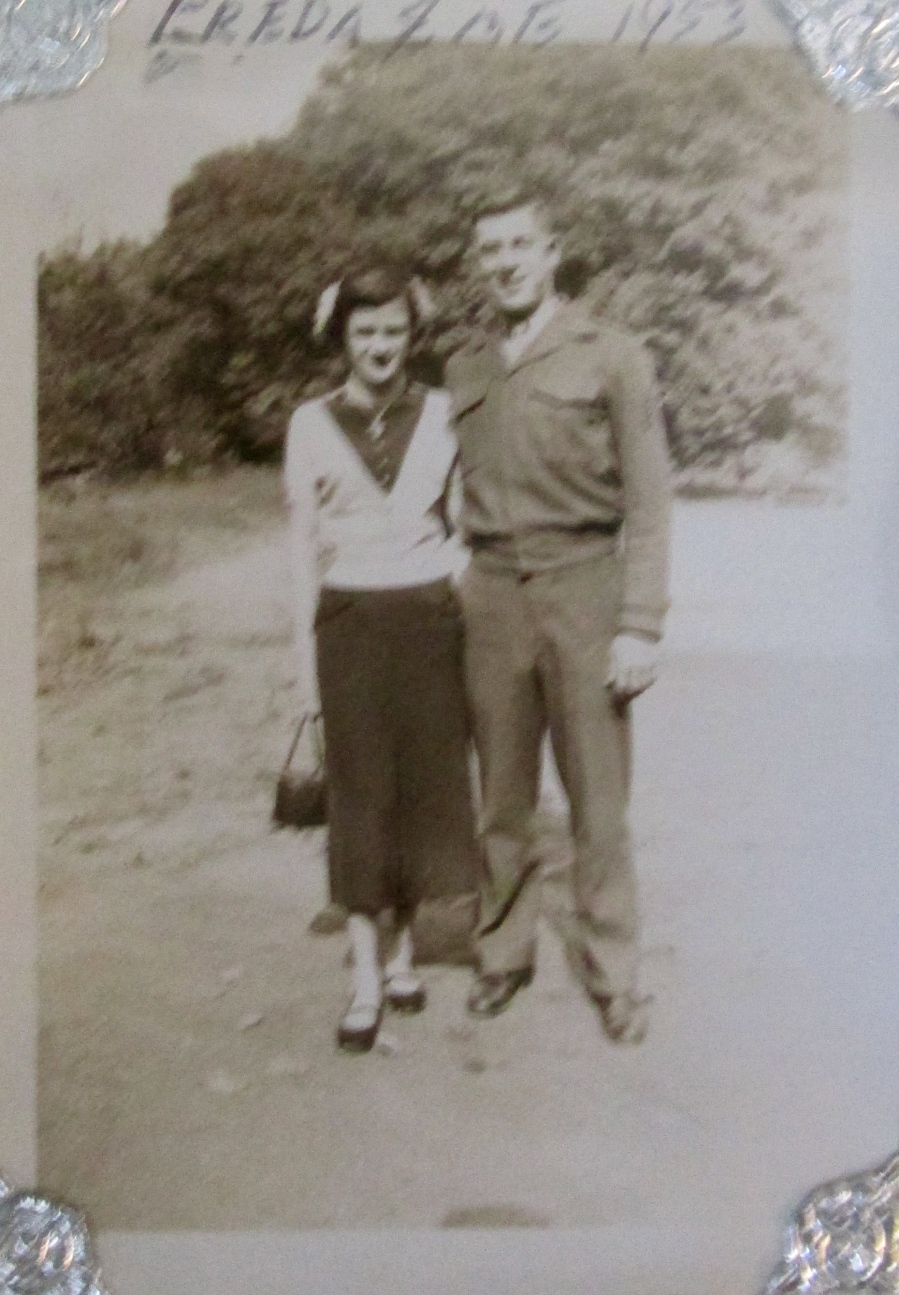 This picture of Freda and Larry Cote in his Marine Corps uniform was taken in 1953 shortly after he returned from the Korean War. It was about the time the couple was married. Photo provided

Larry Cote of Holiday Park III in Englewood, Fla. former Marine Corps sergeant, kept baseball great Ted Williams’ F9F “Panther” jet fighter plane in the air while serving as an airplane mechanic with the 1st Marine Division at the end of the Korean War in the early 1950s.

His plane came in low and slow trailing tongues of fire. It was badly damaged and he was flying too low to eject.

“They said he got shot down in Korea, but it didn’t happen like that. He was bombing an enemy gun emplacement, got nervous and dropped his bombs before he made his upward sweep. Shrapnel from his own bombs tore up the bottom of his jet aircraft,” the 80-year-old former Leatherneck explained.

“Another time Williams crash landed his jet on the beach,” Cote said. “He ran out of fuel and had no other place to go.

“He was too old to be flying close air support in Korea. He had already served in World War II and they should have let him continue to play baseball during the Korean War.

“As far as I’m concerned Williams was a big complainer. He was always complaining about headaches and ear aches. He was down at sick bay a lot,” Cote added. “He wasn’t anybody I would want to be associated with.

“Of course he was losing out on a $130,000 a year salary because he wasn’t playing baseball. When he got back to the States after Korea, Williams went back to playing baseball. He was one hell of a ball player, you can’t take that away from him.”

“He also flew one of my aircraft in Korea. Even Williams, who didn’t hand out many compliments, said Coleman was a hell of a pilot,” Cote recalled.

Cote’s entire unit in Korea is pictured grouped around a Douglas A-1 “Skyraider,” one of the kinds of planes Cote’s repair crew serviced in Korea during the war. Photo provided

“One time Coleman got his plane all shot up. He was doing everything he could to get it back to base.

“As he was coming in we could hear his conversation with the tower over the loud speaker. The fellow in the tower told him, ‘Sir, ditch it!

“‘No. If I can make it over this next mountain I think I can make the runway.’

“Coleman nursed his plane in and dropped it into a rice paddy about 300 yards shy of the runway. When they got to him they had to pull him out of the wrecked plane.

“He was one hell of a pilot. I have all the respect in the world for this guy,” Cote said.

He spent his year in Korea in 1952 and ’53 keeping a squadron of fighter planes in the air. Cote’s crew started with five fighters, but before the year was out he and his repair crew were keeping 23 aircraft airborne from a base 90 miles north of Pusan called K-3.

“A pilot would fly into our base and would come over to me and say, ‘Sergeant, can you fix my plane? It’s running a little rough.’

“We’d tell him, ‘Go up to the Slop-Shoot and have a couple of beers. We’ll take your plane and fix it up.’

At 75 Cote is clad in his Marine Dress Blues. Photo provided

“We’d work on his plane three or four hours, or whatever it took to get it running right again. Often times we’d patch holes in shot up aircraft with the only thing we had lot of, Budweiser beer cans.

“We’d cut out the top and bottom of the can. Then we’d flatten it out, put it on the aircraft and hold them in place with pop rivets. Then the plane would be sent back up in the air.”

Flattened out beer cans were used for other things, too.

“We took some of our beer cans, flattened ’em out and used them to make a roof for the orphanages in town,” Cote said. “We gave these orphanages a lot of our extra flour and other food.”

Korea was a foreboding place. It was cold in the winter, hot as hell in the summer and it smelled.

The high point of Cote’s Korean military career came at the very end of the conflict.

“I kept trying to get to the forward echelon. Finally we were allowed to take a convoy of ammo and food to Baker Company up along the front lines. It took us five days to get there in convoy,” he said.

By the time their convoy reached the front, Cote knew something big was up. They were ordered to turn in their equipment. At that point they found out the North Koreans had finally signed the armistice ending the three year war.

It was July 1953 when the armistice was signed. However, he didn’t return home until December of that year. Cote returned to Quantico, Va. where he completed his three year tour in the Marines.

Eventually he got a job working for Command Aero Space. The company made all kinds of aircraft parts. They even made “Ovation” acoustical guitars out of fiberglass.

“I built tail sections for the Grumman F-14 “Tomcat” fighter for eight or nine years,” Cote said. “Then I became a trouble shooter in their engineering section and spent my time checking out problems for the firm all over the country.” 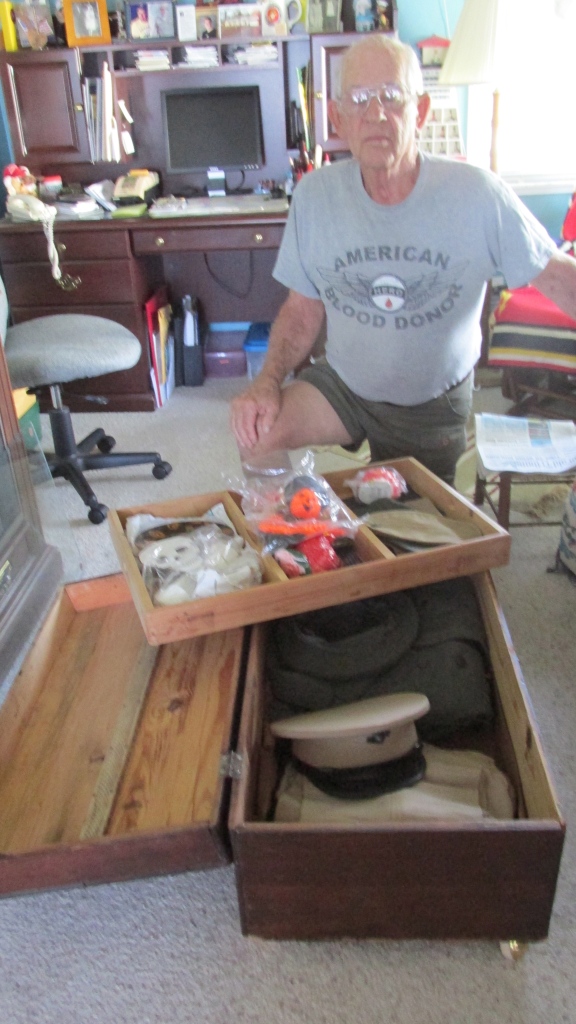 Cote at home with a wooden foot locker he had made for him in Korea. On the lid of the locker it reads: “Lawrence R. Cote, Korea 1952-53” in old English type in gold. Sun Photo by Don Moore

When he retired he and his wife, Freda, came to Florida in 1989. They first went to Naples and then moved to Englewood where they built a home. Finally in 2001 they moved to Holiday Park III.

They have three grown daughters: Cathy, Jo and Paula.

This story was first published in the Charlotte Sun newspaper, Port Charlotte, Fla. on Monday, May 5, 2014 and is republished with permission.

Click here to view Cote’s collection in the Library of Congress.