This converted C-47 transport plane from the World War II era was turned into "Puff the Magic Dragon," which provided close air support for ground troops during the Vietnam War. Photo provided 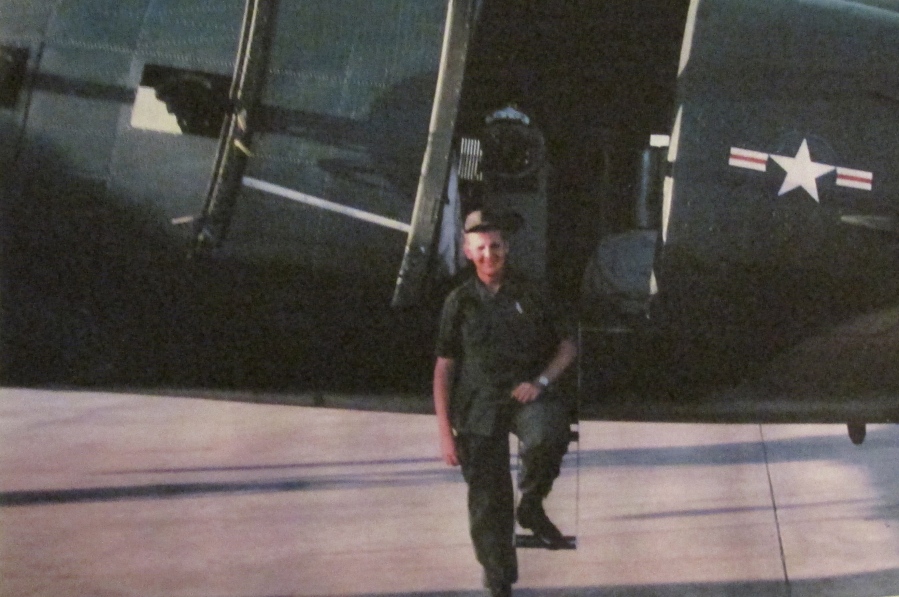 Airman 1st Class Bill Grant stands in front of a Galing gun that could fire 1,500 rounds in 15 seconds. He was a gunner aboard a “Dragon Ship” in Vietnam four decades ago. Photo provided

“Puff the Magic Dragon” was a big hit in the early ’60’s for Peter, Paul and Mary. It was also a big hit about the same time in a different sort of way for Airman 1st Class Bill Grant who now lives in Burnt Store Isles, south of Punta Gorda, Fla.

The young airman flew as a gunner aboard a C-47 transport plane of World War II vintage converted into a “Dragon Ship” for the Vietnam War. This was the plane the troops on the ground called “Puff the Magic Dragon.” The low and slow flying twin-engine transport bristled with a trio of Gatling guns that could each spew out 1,500 rounds of ammunition in 15 seconds.

“we could put a round every foot in a football-size area with no problems,” the 62-year-old local man said. “It was my job to feed ammo from a tin box into one of these six-barreled guns.

The pilot had the sight for the guns. He would fire them as he flew in circles over the target,” he said. “He could fire all three Gatling guns at one time or each gun individually.”

In the early days over there, they flew ground support missions for Special Forces Units under attack. Or they were sent out at night to hit prearranged targets. Then they discovered they could use the planes to search out and destroy the North Vietnamese and Vietcong on their own.

One of these search-and-destroy missions got pretty difficult for Grant and his buddies.

“On this mission we were checking out the roads in Laos looking for signs of truck traffic when they opened up on us with quad .50 caliber machine guns on either side of the ship. The pilot saw the guns and dove for them so the enemy wouldn’t rake the plane.”

The enemy’s .50s knocked out one of our engines so we couldn’t go back to Vietnam and we had to fly on to Thailand. Some of the rounds went right through a box of flares and out the top of the plane. The C-47 had many holes in the ship. It was a little hairy.”

Flying out of Danang one night in February 1966 Grant and his air crew discovered a string of enemy trucks on a mountain road and wiped them out with the aid of Air Force fighter bombers.

“We caught 27 enemy trucks on a mountain road in Laos at night. We dropped flares that turned night into day. Then we burned the first and last trucks in the convoy so they couldn’t escape,” Grant explained.

“As we circled overhead firing hundreds of rounds at the enemy trucks we called in the fighters. We dropped more flares over the target and pulled back to allow our fighters to drop napalm and whatever else they had. As the fighters flew off we hit them again with our Gatling guns. There was everything in that convoy – troops, ammunition, bombs and all kinds of supplies.”

When their “Dragon Ship” flew off there was nothing left of the convoy.

During another flyover down in the delta, south of Saigon, his ship caught a trio of big dugout canoes powered by outboard motors filled with enemy troops crossing a half-mile wide river. They didn’t make it.

“We had been told that anything we could see in that particular area was a target. It was about dusk one night when we flew over some enemy troops in 30-foot-long dugouts. We opened up on them in the middle of the river and they disappeared.”

“We got a call from a Special Forces unit that was about to be overrun by the enemy. A forward air controller on the ground told us, ‘We have movement from the north. Don’t let the enemy overrun us.’ We sprayed the place with bullets,” Grant said.

This converted C-47 transport plane from the World War II era was turned into “Puff the Magic Dragon,” which provided close air support for ground troops during the Vietnam War. Photo provided

By the time the 14gh Air Wing completed its year-long tour of Vietnam, 12 of its 30 “Dragon Ships” had been shot out of the air.

“This one time we were supposed to fly, but for some reason we were replaced by another ship. The replacement ship was shot down and the whole crew killed defending a Special Forces base under attack in the delta,” he said. “One of the crewmen on that plane was getting coffee in the chow line and missed the flight.

By the time Grant completed his year tour of duty in Vietnam he had flown 176 combat missions and logged 775 hours of combat time. A single mission could last five or six hours and some were longer than eight.

What was Grant’s take on the Vietnam War?

“There were too many people in Washington trying to make us be nice in Vietnam. Orders were cut by these nice people in Washington who didn’t want us to do the things that weren’t politically correct,” he said. “Most people over there thought, if they could have done what they were sent over there to do we could have won the war quickly. Unfortunately it didn’t happen.

This story was first published in the Charlotte Sun newspaper, Port Charlotte, Fla. on Sunday, Feb. 13, 2005 and is republished with permission.