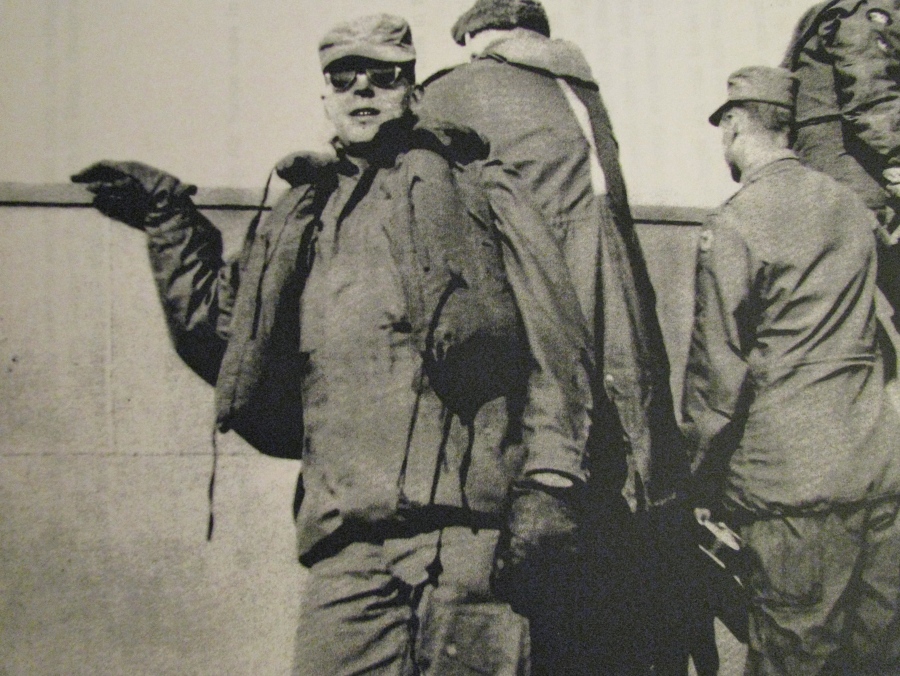 Pfc. Dave Lea is all bundled up aboard a landing craft off Thule, Greenland, during the height of the Cold War in the mid-1950s. Photo provided

Pfc. Dave Lea is all bundled up aboard a landing craft off Thule, Greenland, during the height of the Cold War in the mid-1950s. Photo provided

Pfc. Dave Lea of Englewood, Fla. spent much of his time in the service in the most boring place on the planet — Thule, Greenland.

It was 1956 and absolutely nothing was going on except the “Cold War.” If you happened to be in the Army and exiled to Thule for a year, it was a very cold war.

“It never got above 30 or 35 degrees above zero in the summer and during the cold winter nights the temperature could drop to minus-55 degrees,” Lea said. “One of the least interesting things about Thule is that half the year it is light 24 hours a day, and the other half of the year we were in darkness all the time.”

Lea was serving with a platoon in Thule connected with the Army Corps of Engineers. He was trained in the Army to repair heavy equipment. His expertise was diesel engines.

“Once we got an engine that was outside started, we had to let it run 24-7. If you didn’t, the biggest problem you had was that the diesel fuel would jell up in the lines, and the engine would quit.”

Lea’s Army platoon was stationed at Thule Air Force Base operated by Strategic Air Command. They were the people that were always on guard against a Soviet attack.

Strategic Air Command, or SAC, kept its bombers loaded with hydrogen bombs and in the air around the clock, ready to strike. Thule was not only a SAC bomber base, but it also formed part of the “Dew Line,” a series of top-secret radar sites across the top of the world pointed toward Russia, designed to alert U.S. forces to an enemy airborne attack.

A big night out in Thule for the enlisted men who served with the Corps of Engineers was to go over to the “Airmen’s Club” and drink 3.2 beer. For those of you unacquainted with 3.2 beer, it’s watered down beer — nasty stuff.

One day, just by luck, Lea stumbled across an unexpected treasure.

“I was in my vehicle on base driving along the shoreline when I came across an LCU (landing craft). It was completely enclosed, so I climbed aboard and opened one of the hatches,” he said. “It was loaded with Budweiser, the real stuff. How the craft got there Lord only knows.

“I immediately absconded with many, many cases of beer. I hid them in the back of my battery room on base. Then I went to the captain, my immediate boss, and told him.

“About a week later the base commander came on the base radio, which nobody ever listened to. He was irate about the beer theft,” Lea said. “The commander explained that the beer had been frozen and wasn’t fit to drink. Furthermore, he said whoever took the beer should turn themselves in.”

“The captain got hold of me and said, ‘Get that beer the hell out of my barracks.’ I stashed it all over the place, I wasn’t going to throw it away.

“Me and my buddies drank the real stuff for months instead of that damn 3.2 beer. Nobody squealed on us.

“The base commander was really hacked about the stolen beer.

“I was about 10 months into my year tour at Thule when I was informed I would be attending Arctic Survival School. They take you out in a remote area, and they keep you out there for three days with one day’s rations.”

Lea said only the Army could dream up something like that when he had just two more months to serve in Thule and had so far survived just fine.

“My captain said, ‘Go hide in your battery room for about a week. They’ll never miss you.’ He was right because I did, and they never missed me.” 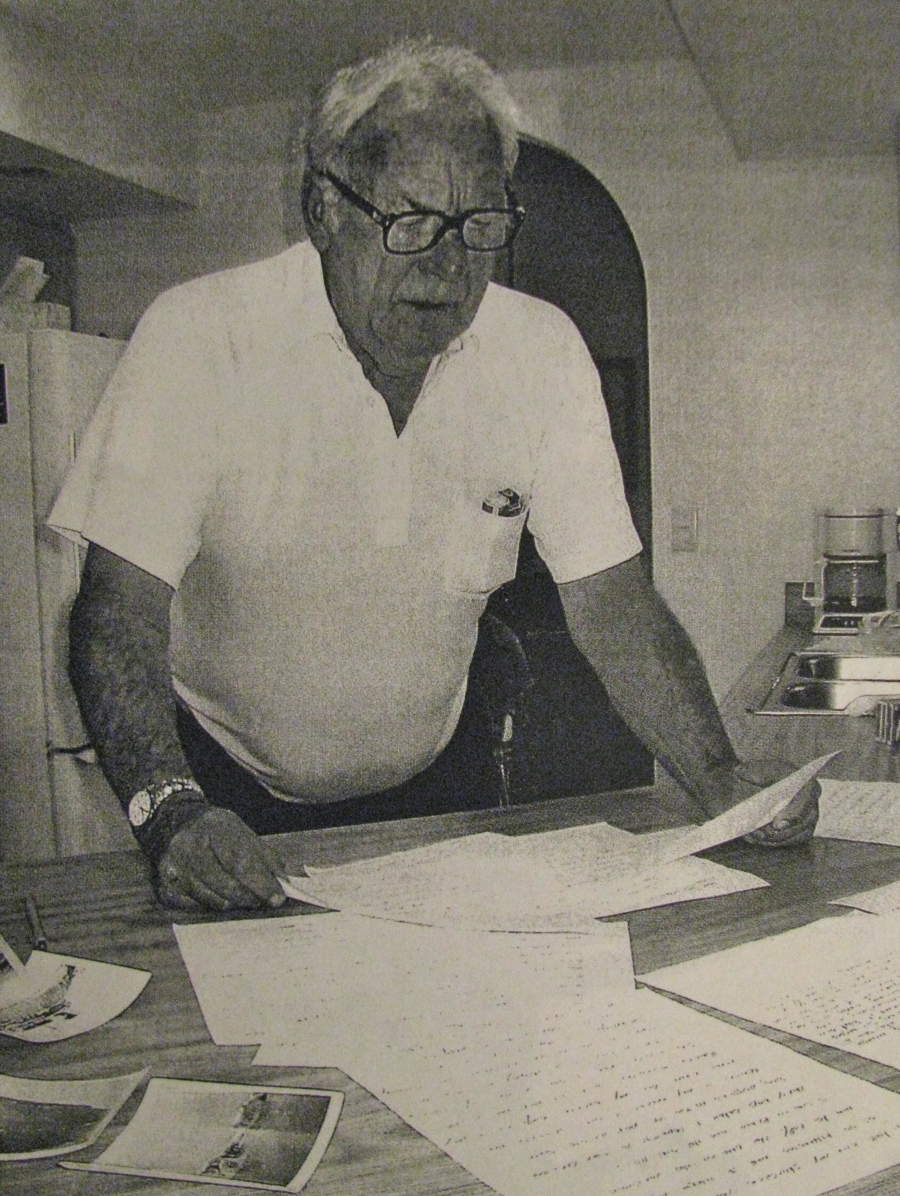 Dave Lea looks at some notes while talking about serving with the Army Corp of Engineers in Thule, Greenland, in 1956 during the Cold War. Sun photo by Don Moore

At the conclusion of his tour in Greenland, Lea was flown back to McGuire Air Force Base in New Jersey on a transport plane with a bunch of other soldiers.

“The air base was in sight, and that was good because the plane was running low on fuel. As the pilot was about to put the wheels on the ground, another plane cut in front of us and touched down,” he said. “The pilot gave the plane throttle and we took off again.

“I said to Pfc. Mike Griffin of Queens, N.Y., who was sitting right beside me, ‘There’s a bright side to all this: ‘If we run out of fuel and crash there won’t be any fire because there isn’t any fuel. And the real bright side is, they won’t have to get dental records to identify us.’

After arriving safely at McGuire, Lea switched to a commercial airline for the final leg of his trip back home and a 30-day leave after a year in Thule. Unfortunately he was sitting in a bar with his arctic gear on waiting for his plane when a military police officer, or M.P., walked in. He headed right for Lea.

“The M.P. was still giving me a bad time about not having my regulation uniform on when my flight was announced. I figured I wasn’t going anywhere,” he said. “I shoved the M.P. on the floor, picked up my duffel bag and ran like hell toward the plane.

“I looked over my shoulder and could see the M.P. was gaining on me, so I threw my duffel bag in a Dumpster and managed to get on the plane without him,” Lea said.

“I took my 30-day leave, but they were waiting for me when I reported to Fort Leonardwood, Mo. They put me in a black company, but the company commander, who was also black, was a peach of a guy,” he recalled after all these years.

He asked me, ‘You just returned from Thule?

“He discharged me 60 days early. I had my honorable discharge in 36 hours and went home to Plymouth, Mich.”

This story was first published in the Charlotte Sun newspaper, Port Charlotte, Fla. on Thursday, June 1, 2006 and is republished with permission.