This was Ngoc-Ha when she was 18, about the time she became hostess in the officers club at Military Assistance Command Vietnam headquarters in Ca Mau in 1969. Photo provided

This was Ngoc-Ha when she was 18, about the time she became hostess in the officers club at Military Assistance Command Vietnam headquarters in Ca Mau in 1969. Photo provided

Ngoc-Ha was an 18-year-old South Vietnamese beauty when she first laid eyes on Lt. j.g. John Dickinson in September 1969. He was a recent graduate of the U.S. Naval Academy flying with “The Seawolves,” an attack helicopter squadron based in Binh-Thuy, Vietnam.

Her family owned a rice planation in the extreme south end of the Mekong Delta where the Song-Ong-Doc River meets the Gulf of Thailand. Because she could speak English, she had recently been hired as hostess at the officers’ club in Ca Mau, headquarters for the U.S. Military Assistance Command Vietnam.

She was bar-tending when he walked into the club and struck up a conversation. They didn’t know it at the time, but their offhand conversation would lead to a 20-year romance spanning the globe.

Ngoc-Ha was impressed with the young aviator’s sincerity and friendliness. After talking to his Huey helicopter crew at a nearby table, John ambled back to the bar and the pretty brunette. Since he didn’t have to fly back to his base at Binh-Thuy until the next day they spent the afternoon talking.

Before leaving the air base at Ca Mau and returning to the “Seawolves'” headquarters in Binh-Thuy he talked some more with Ngoc-Ha. By the time John flew off in his Huey, they agreed to write each other.

Six months later, when he was about to complete his year’s deployment in Vietnam, their letter writing had developed into a serious romance. By then they were trying to determine were their romance should take them.

What John didn’t know, Ngoc-Ha was pregnant with their son.

Conditions in Vietnam were starting to deteriorate as the war dragged on. Not wanting to be linked to a romance with an American naval officer, she asked another American serviceman to mail her love letters to John. Unfortunately, they never arrived.

The same was true for Ngoc-Ha. John’s letters didn’t arrive either.

A few months after he flew back to the U.S., Ngoc-Ha had their son, Minh. This complicated her life because she had to provide for the two of them.

Eventually Ngoc-Ha was forced to move on with her life. Her romance with John had dimmed. Several years later she married a South Vietnamese army captain, shortly before the fall of Saigon in April 1975. She had two more children by him–a boy and a girl–and a fourth child was on the way.

When the country fell to the Communists, Ngoc-Ha was living in the Saigon area with her service-connected husband. He was sent to command a company of South Vietnamese soldiers and she was left at home while enemy mortar rounds rained down on their home.

Ngoc-Ha was seriously injured by shrapnel from enemy ground fire. She sustained a hip wound and was taken to the hospital.

Her husband was captured and sent to a reeducation camp further north in Vietnam run by the Communists.

The People’s Army of Vietnam marched into Saigon a short time later and took over. Ngoc-Ha was imprisoned by their new Communist warlords. She had two strikes against her:  She had worked for the Americans for a time in the officer’s club and her family was rich, in the eyes of the North Vietnamese authorities.

After months in prison, Ngoc-Ha was released in August 1976 through the intercession of a friend. The acquaintance had family in high places in the Communist government.

Because her son, Minh, was half American she knew her family had to escape Vietnam as quickly as possible. If the authorities discovered his father was an American the child would probably been shot.

To survive Ngoc-Ha peddled clothes or anything else she had of value to the public at her corner stand. At the same time she began to formulate escape plans.

With her children in tow, she tried four times over the next few months to flee the country without success. On a couple of occasions she came close to being captured or killed.

In February 1982 Ngoc-Ha learned of another escape plan friends and family hatched up. She decided to take her kids and try to escape with them.

The escape was built around a rickety 25-foot boat, never made for sea duty. Thirty-nine fleeing passengers filled the boat almost to the point of sinking. They would try to reach Thailand, a short distance away.

A couple of nights later Ngoc-Ha, her brood and the rest of the people were adrift in the Sea of Thailand. The escapees barely missed being intercepted by a Vietcong parol boat. The next morning the group spotted five fishing boats near by.

What they didn’t know, when the men in the boats weren’t fishing, they were pirates. They searched the sea for valuables–cash, jewels or people. Because Ngoc-Ha could speak English she became the interpreter between the pirate captain and the people in her boat.

She talked her way aboard the captain’s boat with her children. The men in their escaping boat were towed behind one of the other fishing boats in their original boat. The rest of the women aboard their boat were put aboard the other pirate vessels.

Then the pirate boats separated and went their own way. A few days later Ngoc-Ha’s boat rendezvoused with a second pirate craft to take aboard an ill woman. To her horror she learned, from the woman, that all the females aboard their first boat were repeatedly raped by the pirate crew and thrown overboard. The men, who sailed from Vietnam with these women, were cut loose in their leaking boat to die in a storm. 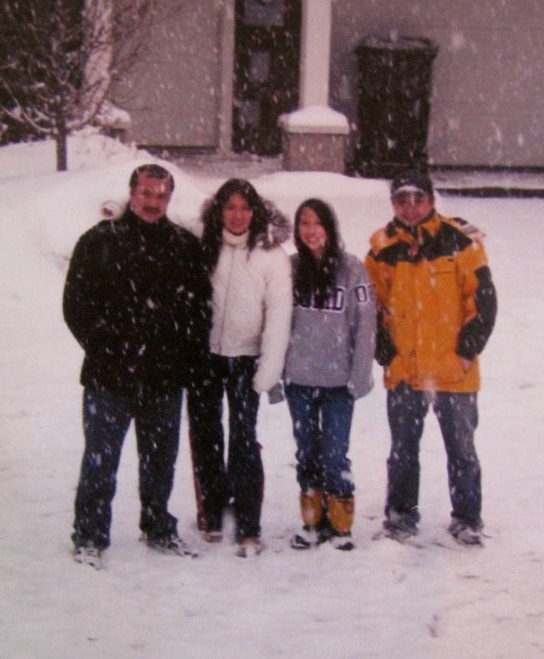 All four of her children at home in the Minneapolis area one snowy day. From the left Minh, Lynn, Duc-An and Khai. Photo provided

A few days later a large cargo ship appeared on the horizon. She was the “Cap Anamur” out of Hamburg, Germany. The freighter was headed for the pirate boat where Ngoc-Ha and her children were held.

It was their lucky day. The “Cap Anamur,” was under contract to a German charity. Their mission: rescue Vietnamese boat people fleeing their country in search of a better life.

She whisk Minh and Khai aboard the freighter and sailed away from the pirate peril and the peril of her country now under Communist control. Several months later Ngoc-Ha and her family, together with several hundred other refugees, arrived in Hamburg aboard the “Cap Anamur” to started a new life.

Shortly after their arrival, Lynn, her oldest daughter, was born. A second daughter, Duc-An would be born later also in Germany.

The German charity provided them with food, housing, education, work and a chance to learn German as a second language. Her family was relocated to a town 70 miles from Munich where they spent the next eight years assimilating into their new culture.

She got a job working as a cook in a Vietnamese restaurant. Her income was sufficient to support her family. It was during this period Minh, her oldest son, started quizzing his mother about the father he had never known who lived in America. She had not talked to John in almost two decades.

She wanted something more not only for Minh, but for herself. She wondered what happened to her first love after he flew away from Vietnam and back to the U.S. so long ago.

On a long shot she asked an American friend, Dennis Keating, who was returning to the states to see if he could somehow find her lost love. All she knew was that his name was John Dickinson and he lived in the Minneapolis, Min. area.

Keating obtained a copy of a Minneapolis phone book in May 1990 and started calling John Dickinsons. On the third try he hit pay dirt.

“Did you by chance graduate from the Naval Academy? Were you a helicopter pilot in Vietnam in ’69? And mostly importantly, did you know a Vietnamese girl named Noc-Ha?” he asked.

When John answered “Yes” to all three questions, Keating provided him with Ngoc-Ha’s phone number in Germany. He called her at midnight, her time, and the rest is history.

Ngoc-Ha hold a copy of her memoirs, “My Love Far Away,” published in Vietnamese. She hopes to publish an English edition. Sun photo by Don Moore

Editor’s Note:
Noc-Ha has written a memoir she calls “My Love Far Away.” It tells about her life in Vietnam, the survival of her family during the Communist takeover of her country in 1975. She also talks about her escape to Germany and finally to America where she finds John, the father of her first child and her first love, 20 years later. She hopes to produce an English edition of her story.

This story was first published in the Charlotte Sun newspaper, Port Charlotte, Fla. on Wednesday, Oct. 16, 2013 and is republished with permission.