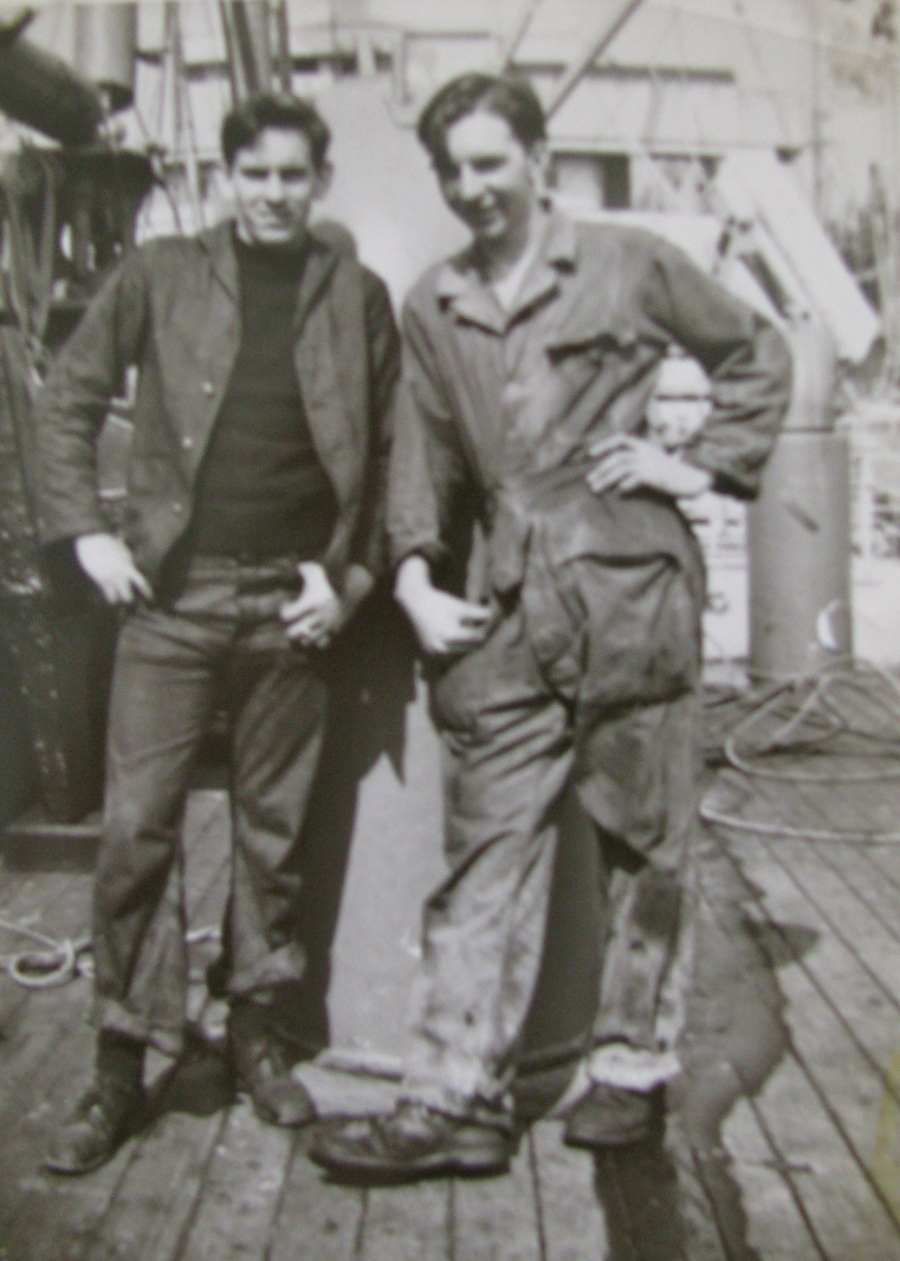 Card (left) is pictured with his buddy Cleveret Stewart of Cumberland, Maryland aboard the USAT George Washington during World War II. Photo provided 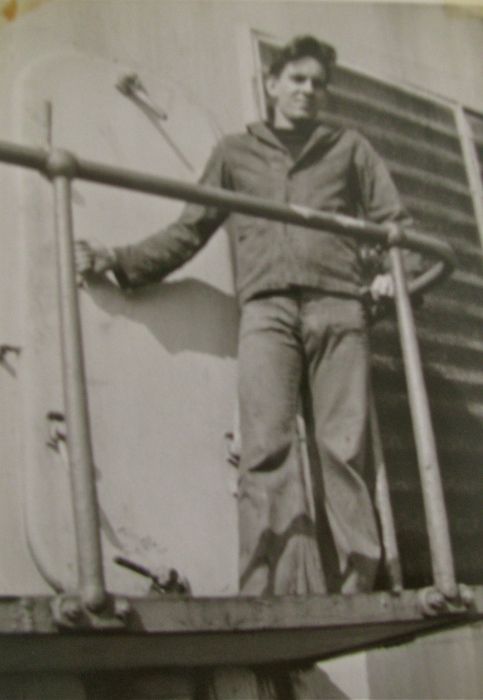 Arthur Card is pictured as an 18-year-old Merchant Seaman aboard the converted German liner USAT George Washington during World War II. The liner was turned into a troop transport that cross the Atlantic numerous times during the war. Photo provided

Arthur Card of North Port, Fla. made 30 trips across the Atlantic during the closing months of World War II ferrying troops, equipment and supplies to the war front in North Africa and Europe as a member of the U.S. Merchant Marines.

He was a crewman on several Liberty ships and a World War I vintage German ocean liner converted to a troop transport that took soldiers, war brides, POWs and nurses to and from the war zone. Card was 16-years-old when he signed up, with his parents’ permission, for the Merchant Service. It was dangerous business.

The U.S. Merchant Marines suffered a larger percentage of casualties during the Second World War than any of the military service branches. Without these merchant seaman America’s war machine would have ground to a halt during World War II. They supplied the goods to fight with.

“During summer vacation from high school I went down to sign up with the Navy at 16, but they wouldn’t take me. They sent me over to the Merchant Marines. They gave me a physical right then and there and sent me home with some papers,” the 85-year-old former mariner recalled.

“My mother and dad said, ‘We can’t sign those papers. You’re too young.’ But finally they did and I sent them back to the Merchant Marines,” Card said. “Two weeks later they sent me to Sheepshead Bay in Brooklyn where the Merchant Marines had a school. I spent the next couple of months learning seamanship.” 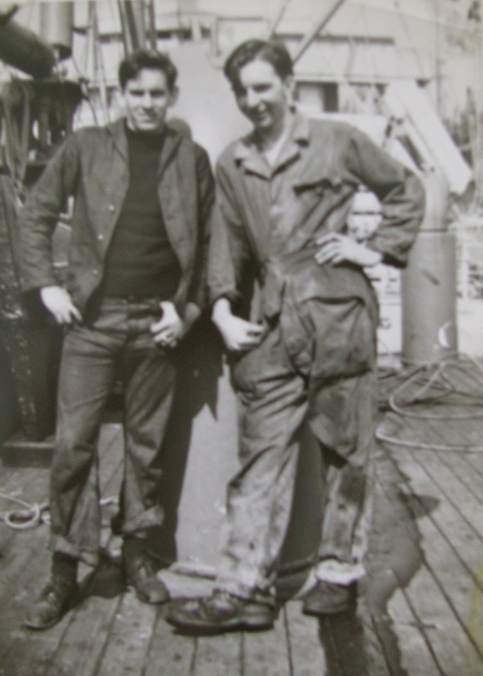 Card (left) is pictured with his buddy Cleveret Stewart of Cumberland, Maryland aboard the USAT George Washington during World War II. Photo provided

Card went aboard his first ship, an old tanker named the SS Durango in Baltimore. She sailed for Port Arthur, Texas to pick up a load of bunker-C oil they took to Philadelphia.

“I went back to New York and signed up aboard a liberty ship, the Joseph H. Nickelson, that headed for Charleston, S.C. to fill up with 100-pound sacks of flour. It took them a month to load the ship because it was all done by hand,” he said.

“We sailed back to New York aboard the Nickelson and joined up with a convoy headed for Naples, Italy. We reached the Italian port 21-days later,” Card recalled. “The trip across the Atlantic was an eye opener for a 16-year-old. I never saw a German submarine on that first trip. But the depth charges dropped around us by the destroyer escorts that accompanied us on the voyage to keep the subs away were unnerving.

“They turned us loose to go through the Straights of Gibraltar. I got awakened by one of the ship’s officers. He said, ‘Look out the port hole. You know what that is?’

“‘That’s the Rock of Gibraltar, but it dozen’t look like the picture the insurance company advertises,’ I said.

“We sailed around Sicily and anchored in the Messina Straights for a day or so. Two guys paddled out to our ship in a dugout canoe. They threw us a line and had a basket tied to it. We sold them cigarettes for $10 a carton we put in their basket.

“A buddy put six cartons of cigarettes into the basket and was in the process of lowering them over the side when a voice from the deck above said: ‘Drop that line!’ The sailor with the cigarettes looked up at the voice and replied, ‘No way am I dropping the line.’ 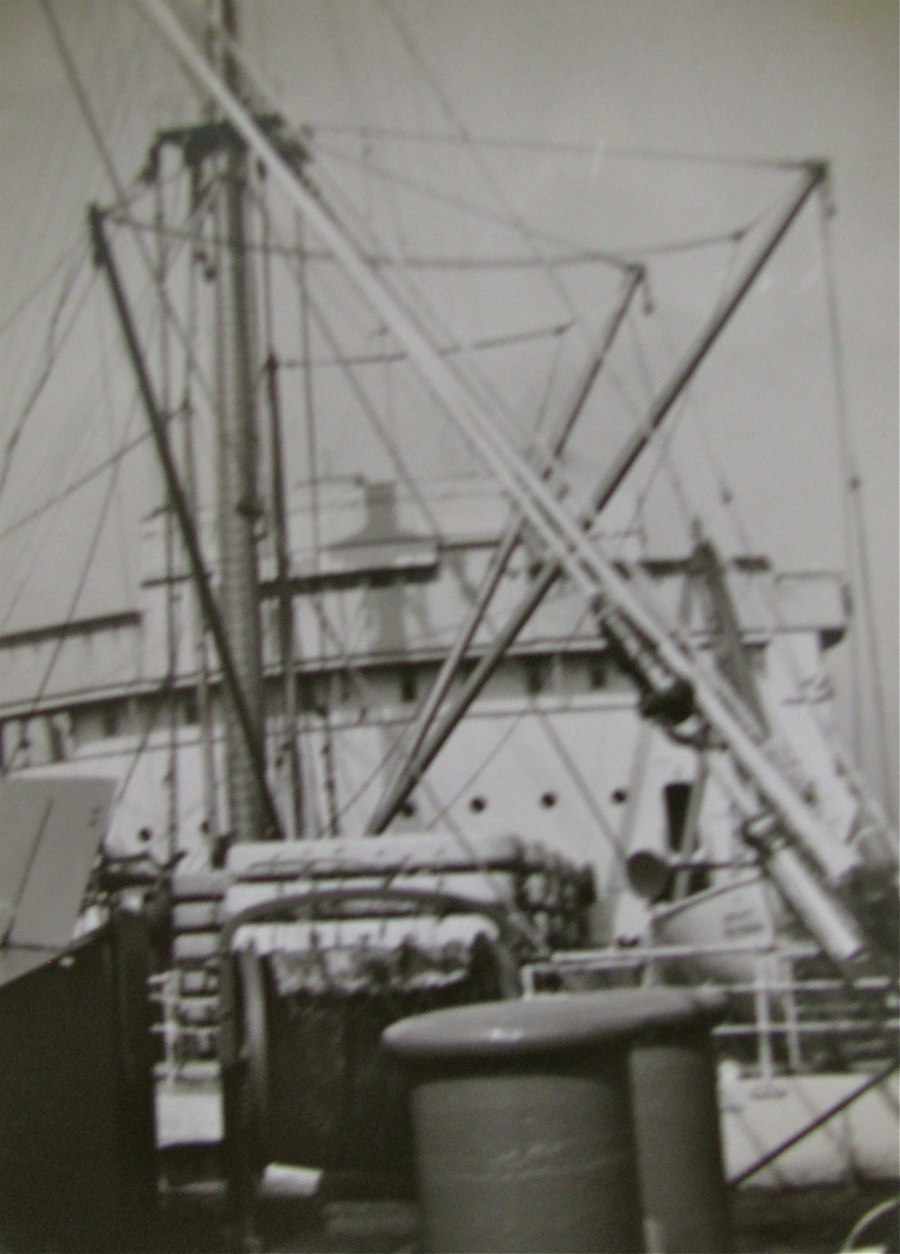 This is the USAT George Washington’s main deck. The World War I German liner was used as a troop transport by the U.S. during the Second World War. Photo provided

“The guy on the deck above pointed a .45 caliber pistol at him and said, ‘You drop that line, or else!’ The Italians in the canoe below got away with six cartons of free cigarettes. The guy who lost his cigarettes spent the next month crying about his loss,” Card said 65 years later.

From the straights, the John Nickelson sailed into the harbor at Naples.

“The harbor was a mess because the Germans scuttled every ship they could in the harbor before they left,” he said. “Our dock during that first trip to Naples was another ship in the harbor that had turned upside down.

“The Italians came aboard to unload our ship. Everyone of them had a tin can with a wire handle on it. They filled their cans with food from our trash cans. We threw away more food than we ate.

“Back through the Straights of Gibraltar we sailed and connected with a convoy headed to New York Harbor. After a couple of weeks at home I took another liberty ship called the William R. Lewis back across the Atlantic. We left with a convoy out of Nova Scotia with a ship full of war materials headed for Antwerp, Belgium,” Card said.

It was a repeat performance–more German U-boats, more storms and more problems. But like his first crossing the old sailor made the voyage safely.

“We spent a couple of weeks in Belgium. While we were in Antwerp we could hear the German ‘Buzz Bombs.’ They were firing them from the Netherlands. The English said, ‘When you could hear the Buzz Bombs everything was alright, but when you didn’t it wasn’t.'”

“My first duty aboard the George Washington was in the engine room. I was a wiper, but before the ship left the harbor I had become a fireman,” Card said. “During my first three trips aboard the World War I retired German ocean liner we took 10,000 troops back to the USA from Le Havre, France. We also took war brides, POWs and thousands of G.I.s back home. 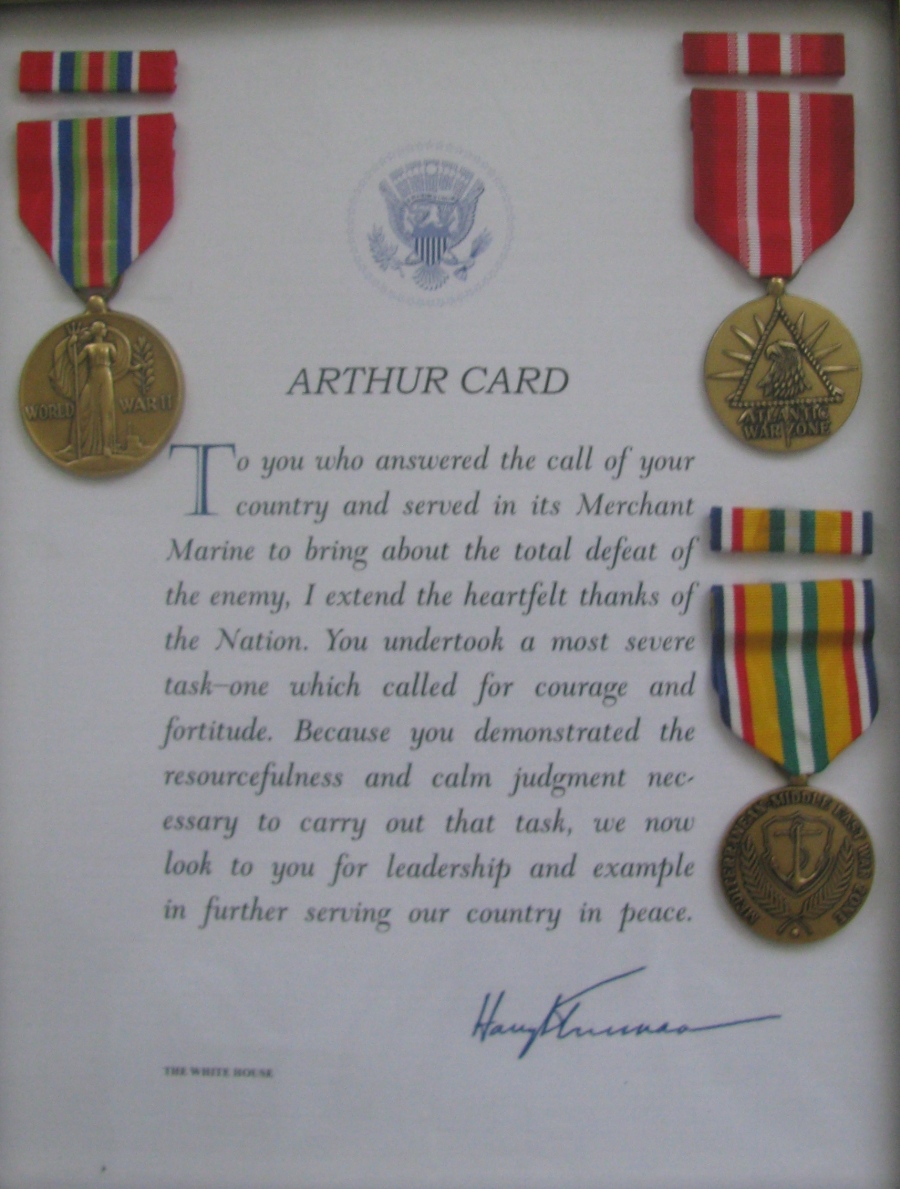 “I felt sorry for the G.I.s because they had to walk up to the ship’s top deck to get to their mess hall. They couldn’t sit down and eat, they had to stand up to a table about chest high and eat. The deck under their feet was filthy with puke. During the entire trip across the Atlantic they weren’t allowed outside on deck” he explained.

“Speaking of seasickness, We took a load of POWs back to Germany aboard the George Washington. It seemed like half the German soldiers were seasick before we left New York Harbor. So much for Supermen.

“I got to be assistant deck engineer aboard the George Washington. I was 17 or 18 years old,” Card said with pride. “I was in charge of all the machinery on deck. I shared a beautiful cabin with another guy. Our cabin had two berths and all wood furniture. It was really nice.”

“The George Washington could cross the Atlantic in about 10 days. The Queen Mary made the same trip in half the time,” he said. “After our last trip aboard the liner they took her to the Brooklyn Navy Yard and put her out of service.”

Card sailed on the old German liner until the summer of 1947 when he was discharged from the Merchant Marines.

Right after the war Card went home to Norwich and took a series of odd jobs. Then he bought a truck and spent several years transporting military ordinance for the services around the country as a civilian contractor. After that he took a two year course at a local college and became a draftsman – a position he held for decades until he and his wife, Inez, retired to Florida in 1998.

Card has four grown children who live all over the US: Patricia, Arthur, Jr., Keith and Robin.

This story was first published in the Charlotte Sun newspaper, Port Charlotte, Fla. on Wednesday, June 19, 2013 and is republished with permission.

Click here to view Card’s collection in the Library of Congress.