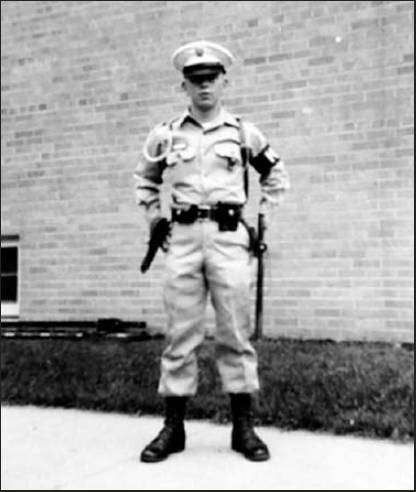 Andy Hawkinson was a teenage MP in this picture just before he was sent to Eniwetok Island in the Pacific in 1957 where dozens of atomic blasts were set off. Photo provided

Andy Hawkinson is the last of a dying breed. He is one of the last of an estimated 400,000 American soldiers who took part in atomic bomb testing during World War II and throughout the Cold War up to 1992.

Some say they were used as guinea pigs in these bomb tests by the Department of Defense. Worse, they weren’t told what medical problems they would probably have until they started experiencing serious medical difficulties years later.

“Because of the wonderful advent of the Internet, I found studies done by the federal government starting as early as 1958 that documented contamination at bomb sites. Nobody was supposes to know about it,” Hawkinson said.

“The Department of Defense originally admitted that approximately 287,000 veterans were exposed to atomic radiation, but there were tens of thousands more,” the 67-year-old North Port, Fla. vet explained. “The VA is required by law to know exactly how many of us are left, but it won’t tell.”

Hawkinson was an 18-year-old military policeman in 1957 when he was sent to Eniwetok, a tiny island in a small group of islands in the Pacific’s Marshall Island Chain, 1,000 miles from anything. It was the epicenter of atomic and hydrogen bomb testing for the United States in the 1940s and ’50s. He was scheduled to serve a year tour of duty on the desolate island.

“If it hadn’t been for my dad’s death on Sept. 25, 1957, I would have probably been dead by now,” Hawkinson said. “I was given compassionate leave to attend my father’s funeral after my first six months on the island. I never returned.”

Although neither an atomic nor a nuclear bomb was detonated while he was on Eniwetok, by the time he arrived 22 bombs had already been exploded within a couple of miles of the island. An additional 21 thermonuclear devices would be detonated in a single month a few weeks after he left for the funeral.

They were detonated in four different ways, he explained. Some of the bombs were set off from steel towers, either 100 or 300 feet tall. Others were dropped by a bomber. Some were detonated under water and a few were detonated on a barge in the lagoon at Eniwetok.

The fact Hawkinson missed all 43 explosions didn’t spare him from a long list of medical problems he suffers from today. They began cropping up two decades after he left the contaminated island. The former soldier said his doctors told him many of his maladies were caused by exposure to radiation.

“We were there to maintain peace among 500 troops, which was a bit difficult because Eniwetok wasn’t a very pleasant place to be. We were also responsible for security. We envisioned the possibility Russian subs were in the area because of the nuclear testing,” he said.

Eniwetok consisted of a mile-long strip of sand with a harbor at one end. It was a typical military installation with prefab buildings that served as barracks, a mess hall and a power plant. There was a boat dock, a short paved runway and a single road that ran the length of the island and curved around the lagoon like a question mark.

“On Saturdays, when a group of us MPs got the day off, we’d borrow a landing craft, put an Army truck aboard filled with beer and steaks and sail 10 miles across the lagoon to Sally Atoll. We’d drive our truck full of food and drink onto the beach, set up a volleyball net, play ball and have a merry old afternoon. Then we’d sail back to Eniwetok.”

Nobody told the MPs their island playground had been ground zero for three atomic bomb blasts. One of the bombs was a 48-kiloton explosion, three times as large as the bomb the U.S. dropped on Hiroshima.

“We climbed all over what was left of the steel framework where the bomb sat before it was detonated. Bushes had reinvigorated themselves on the island, everything looked fine. There were no warning signs to tell us Sally Atoll was reeking radiation,” he said. 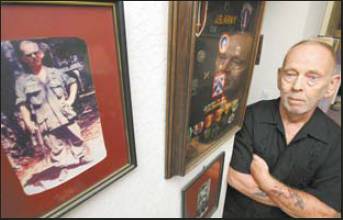 Veteran Andy Hawkinson served as a soldier on an atomic bomb testing site for the Department of Defense in the 1950s. Sun photo by Don Moore

It wasn’t until 1977, years after Hawkinson got out of the service and was the manager of a bank in Santa Fe, Calf., that his radiation problems hit home one weekend.

“I went to a football game with a friend, Cal was playing the Air Force. During half time I realized all of a sudden I couldn’t see the football field,” he said. “The following week I went to see an eye specialist and he told me I had cataracts in both of my eyes. I was only 37 years old. The doctor said it was probably from radiation exposure.”

Hawkinson became an Atomic Veteran activist in the 1980s. His metamorphosis began by learning what had happened to him and thousands of other young soldiers exposed to radiation from nuclear bombs in the first two decades after WW II.

He read a newspaper article about Orville Kelly, who established the National Association of Atomic Veterans in Burlington, Iowa, in the ’70s. A short time later, Hawkinson met Kelly at a meeting of his newly formed veterans group in California in 1978. Kelly was on his death bed.

Kelly had served in the military at Eniwetok at the same time as Hawkinson. But Kelly was there during all of the final 21 blasts that closed out this country’s atomic and hydrogen testing programs in 1957-58. Kelly died shortly after Hawkinson first met him.

“After meeting Kelly I started forming Atomic Veterans chapters around the nation,” he said. Hawkinson quickly became one of the leaders of the activists group.

“I organized my first chapter at Trinity Methodist Church in Berkeley, Calf., in 1980. I arranged to have several doctors, a couple of attorneys, former Congressman Norman Panetta and someone from the VA at the first meeting,” he said.

An Atomic Vet’s publication during this period noted: “Andy Hawkinson, our National Coordinator, initiated new chapters in over a dozen states in less than six weeks. In and out of a state once every three days, with newsmen on his heels and the Defense Nuclear Agency looking for his scalp, Andy was instrumental in getting local chapters started in Nevada, Arizona, Tennessee, Georgia, Louisiana, Maine, Rhode Island, New York, Maryland and Massachusetts.”

In 1977 Hawkinson sent a claim into the VA to obtain benefits for a list of medical problems reportedly caused by exposure to radiation contamination.

“My claim was denied by the VA because it said I was never exposed to any significant amounts of radiation,” he said it told him. “In 1984, I organized a suit against the VA for the right to be represented by an attorney and receive VA medical care.

“The VA has continually refused to hear our case and we have taken it all the way to the U.S. Supreme Court. Eventually the VA created the Court of Veterans Appeals and our case was remanded to that court. The Department of Defense was ordered by this court to help the Atomic Vets, but the DOD will do nothing for us.”

Finally, in 2003, Congress stepped in and forced the DOD to redo the scientific details involving Atomic War Vets. As a consequence, these vets are now at the same level of treatment as a regular war vet with 100 percent disability. However, by that time most of these old soldiers had passed away.

Ironically, Hawkinson has been granted 100-percent medical disability by the VA, too, but not because of his exposure to radiation. In 2002 the VA said he was eligible for the compensation because of exposure to Agent Orange during his Vietnam War service in 1967 and ’68.

“I am proud of my 14 years of military service before and during the Vietnam War. However, it is despicable what the VA and the DOD has done to veterans like us who need medical treatment and compassion,” Hawkinson said. “They’re still doing it to our servicemen and women who are serving overseas right now. Someone should be shot over it!”

Asked what the U.S. Government had done for the Atomic War Veterans in the past half-century, he dropped his head and sat in silence at his dining room table.

“You’re gonna make me cry. You hit the one button that touches a nerve,” the former soldier said as he looked up at me with tears welling up in both eyes.

This story was first published in the Charlotte Sun newspaper, Port Charlotte, Fla. on Monday, May 28, 2007 and is republished with permission.