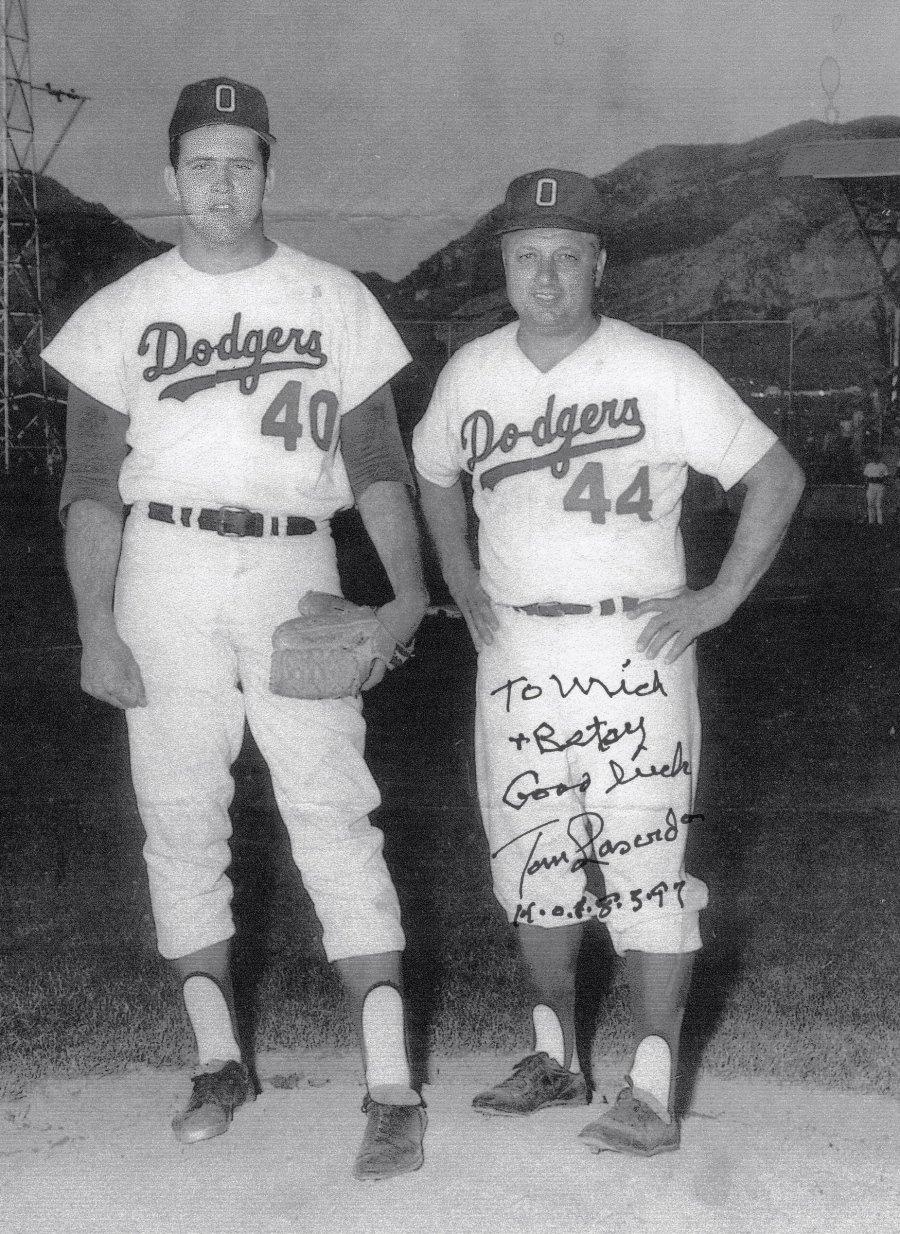 Mick Johnson, a 6-feet, 4-inch pitcher for the Los Angeles Dodgers in 1968, stands besides his mentor, Dodger's minor-league manager Tom Lasorda. They said: "'Mick had a fast ball he could throw through a brick wall.'" Photo provided by Betsy Bracy 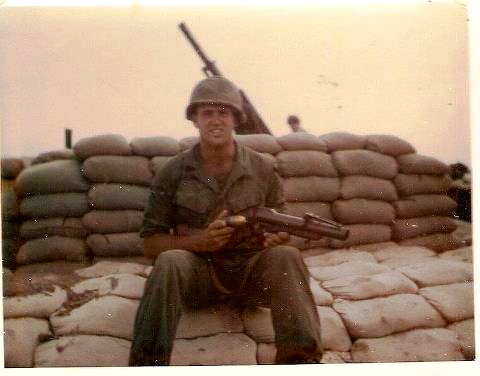 Mick Johnson of Bird Bay subdivision in Venice, Fla. was “sluffing off” on a football scholarship at Philadelphia’s Villanova University in 1968. At the end of the school year he was drafted as a minor league pitcher by the Los Angeles Dodgers.

“I played a half season with the Dodgers. In September ’68 I lost my military deferment when I dropped out of college and was drafted into the Army at the height of the Vietnam War,” the 64-year-old local resident said. “After eight weeks of basic at Fort Bragg, N.C. and several more weeks of artillery training at Fort Sill, Okla. I was sent to San Francisco and put on a TWA flight to Vietnam.

“Seventeen hours later I stepped off the airplane at Bien Hoa Air Force Base in South Vietnam. After an in-country indoctrination I was assigned to the 1st Air Cavalry Division at Landing Zone Liz. When I first got to Vietnam the artillery unit I was attached to moved when the enemy moved.

“Eventually we established an artillery fire base about 20 miles north of Tay Ninh in the middle of a bamboo jungle, along a dirt road at Landing Zone Jamie,” Johnson recalled. “The bamboo was so thick you could be 10 feet from someone and not see him. It was five or six clicks from the Cambodian border near the Ho Chi Minh Trail, used by the North Vietnamese Army to transport military supplies.

“When we arrived there they dropped the guys, guns and material for setting up the base from choppers. The Army Corps of Engineers brought in bulldozers to build the fire base and clear the land. It took them about two weeks to complete building the L.Z.

“All the time the North Vietnamese Regulars were watching us. It almost seemed like they were waiting for us to finish the the L.Z. so they could attack,” he said.

“It started around midnight May 12, 1969 with sporadic gun fire. Then at 2:01 a.m. all hell broke loose. The NVA hit the L.Z. with 200 rounds of mortar and rocket fire,” Johnson said. “Uniformed NVA troops broke through our barbed wire perimeter defenses with human wave attacks and started to overrun the L.Z. Our 130 infantry and 55 artillery guys were surrounded by a much larger enemy force.

Almost immediately one of the NVA’s mortar rounds hit the 105 mm Howitzer providing illumination rounds over the base so we could see our attackers. All but Cpl. Len Duchene was killed by the direct hit.

“For the next 2 1/2 hours Duchene worked by himself on the Howitzer. He did the work of six men. He was unbelievable. Enemy bullets were flying all around him, but this guy was like Superman. He worked all night firing one illuminating round after another. We probably would have been overrun if he hadn’t performed.”

After the battle Duchene received a Silver Star medal for his heroism at Landing Zone Jamie.

“A few days earlier I had been appointed acting corporal. My six man squad worked in the ammo dump or moved ammo around during the battle.

“At the height of the attack the NVA overran three of our bunkers. We had 26 in all in the oval fire base. The ammo base we were protecting was only 20 yards from one of the lost bunkers the NVA held.

“My five guys were as good as it gets. Jim Fuller an 18-year-old San Diego native and ‘Flippy,’ a 140 pound dynamo – stayed with me at the ammo base. The other three guys ran ammo to the gun crews.

“We had five other 105 mm Howitzers, but we couldn’t fire them at the NVA because they were too close. We fired mortar rounds instead,” he said. “By timing the mortar and rockets the NVA were firing at us we pinpointed their fire bases and knocked them out with our mortars.

“During the NVA onslaught I was hit in the shoulder by shrapnel. Spec-5 Greg Hood, this fantastic medic, patched me up. He told me, ‘If you don’t think about your wound it won’t hurt.’ He was right,” Johnson said.

“About dawn the fighting slacked off a little bit and then the NVA sent in another human wave attack. It was like they were never gonna stop. You’d knock one down and another enemy soldier would keep on coming.

“Then they sent in ‘Puff the Magic Dragon,’ a C-47 twin-engine transport equipped with Gatling guns, that covered the ground around the outside of the L.Z. with bullets every five inches. After that the Air Force sent in fighters that strafed the area. Then ‘Cobra’ gun ships came in and finished it.

“Things started quieting down. We were just about out of ammo when we got resupplied. The twin-rotor Chinook helicopters brought in bulldozers that immediately began digging a pit that was used to bury the NVA dead. I don’t think anybody ever counted, but there must have been hundreds of them.

“We lost about 40 killed and a bunch more wounded,” Johnson said. 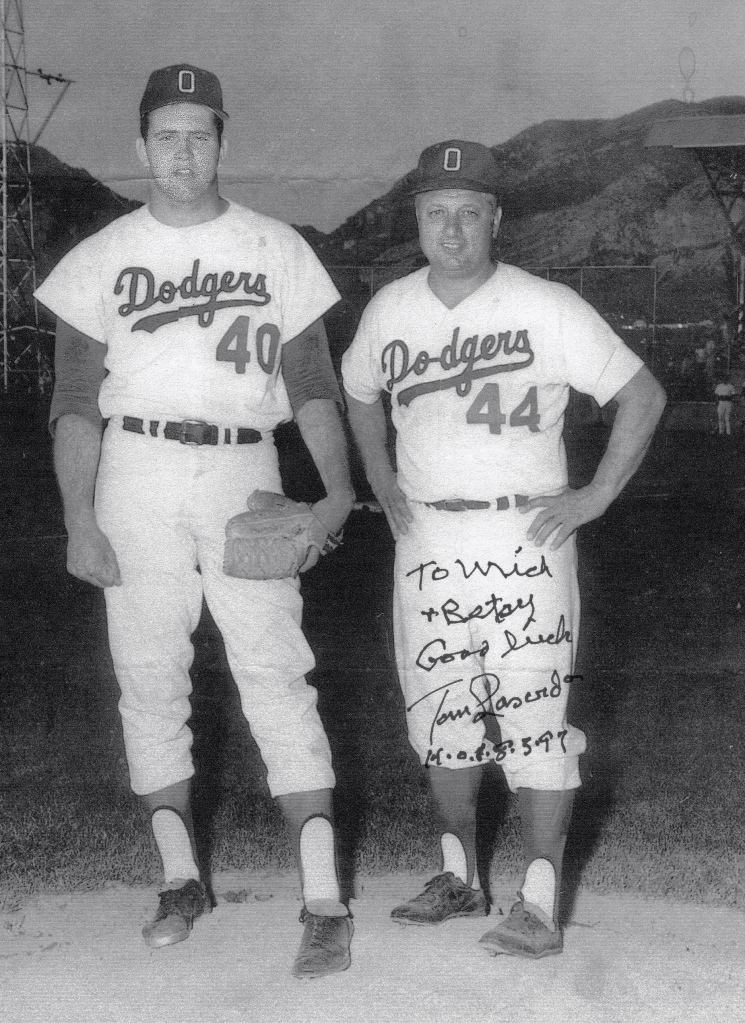 Mick Johnson, a 6-feet, 4-inch pitcher for the Los Angeles Dodgers in 1968, stands besides his mentor, Dodger’s minor-league manager Tom Lasorda. They said: “‘Mick had a fast ball he could throw through a brick wall.'” Photo provided by Betsy Bracy

“They called for a Medevac helicopter and requested a doctor be on board.The chopper came in and picked us up an started flying us back to the closest MASH hospital about 30 minutes away. They were working on this guy in flight. As fast as they poured blood into him it poured right out. At one point the doctor told the medic helping him, ‘Just let him go. There’s nothing else we can do for him,'” Johnson recalled the doctor saying 40 years later as he shook his head.

“My tour in Vietnam was up on Feb. 6, 1970. We flew into San Francisco where the Army was at its best. It put money in your pocket, made your airline reservations and gave you a clean new uniforms,” he said. “This was the height of the Anti-War Movement that was in full swing. We got a rude awakening about the war when we took a cab from the base to the airport even though we were dressed in civilian clothes the people yelled insults at us.

“Seven Army guys got aboard this big Northwest Airline jet from San Francisco to Minneapolis. Shortly after we took off the pilot came back to where we were and told us, ‘My boys fly first class.’ “Then he took us to the first class section and told the stewardess,” ‘Whatever they want give it to them.’

“We hadn’t drunk any beers in a year so we had a few on the way to Minneapolis. We switched planes there and flew on to Philly. There were only three of us left on the flight to Philly, but the captain invited us to first class once again. We had some more beers.

“Forty relatives were waiting in Philly to greet me. As the three of us stood at the top of the stairs looking out over the crowd we had to hold on to each other in order to stand up,” Johnson remembered.

“I got out of the regular Army a bit early, on June 19, 1970, and went back to playing major league baseball with the Dodgers. Dodger’s Manager Tom Lasorda took me under his wing because I had grown up in Morristown, the same town he was from.

“In those days I was a 6-feet, 4-inch, 220 pound pitcher. Because of my size they said I could throw a fast ball through a brick wall,” Johnson recalled. “All I threw were fast balls when I got to professional baseball and that didn’t cut it in the majors.

“I played a couple more seasons for Tom. He use to say, ‘I had the best 58-foot curve-ball he ever saw. It was a shame home plate was 60-feet, 6-inches away.’

“Tom worked with me and eventually I developed a change up and a curveball. But one day I blew out my elbow trying to throw a curve. Tom had been so good to me, but at that point he told me, ‘Mick, I can only use you against certain hitters. Trouble is these hitters are all retired.'”

He was released from  baseball in 1973 after injuring his elbow.

Johnson returned to Villanova’s engineering school. Later he went to work for an outfit in Pottstown, Pa. that did engineering site work for a company that built banks. He worked for the firm until he developed a brain tumor in 2000 and was forced to retire at 51.

“I loved to golf and I had a cousin who lived in the Venice area. I moved down here in 2000 and went to work at Calusa Lakes Golf Course in Nokomis. When I’m not golfing I drive the fairway mower unit. The biggest decision I make these days is whether to turn the mower to the left or the right,” he said with a grin.

This story was first published in the Charlotte Sun newspaper, Port Charlotte, Florida on Monday, Jan. 6, 2013 and is republished with permission.