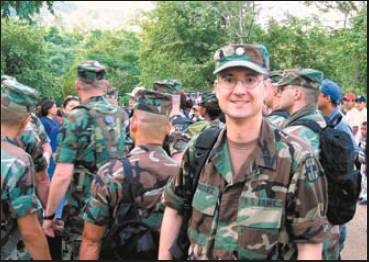 The 38-year-old Port Charlotte, Fla. physician is a major serving with the 5501st U.S. Army Field Hospital in San Antonio, Texas. This is the second time he’s been activated in the past three years.

His first deployment was to Bosnia in 2002 where he served for 90 days. This time he stayed stateside and served as a replacement doctor at the hospital in Fort Benning, Ga.

“When I went to Bosnia, the country had just been stabilized,” he said. “They were in the process of rebuilding the infrastructure that was heavily damaged.”

His unit was stationed in an old Soviet Union bomber base at Tuzla in what had been communist Yugoslavia. In addition to his hospital unit, a U.S. Air Force squadron brought in supplies and the people who were doing the rebuilding on C-130 transport.

“I was one of the doctors in the clinic taking care of the soldiers and civilians. The civilians were the sickest people, because there were a lot of older people with chronic illnesses. We admitted some of them to our hospital, but the ones we couldn’t take care of in Bosnia we sent on to the U.S. Army hospital in Germany,” the doctor explained.

During his time overseas he was on call to handle a suicide case.

“A Bosnian lady who was married to an American tried to kill herself. She didn’t want to leave the country, but her husband wanted to go back to the states. She overdosed on pills, but we saved her,” he said.

Dr. Arturo Rodriguez-Martin, at right, works with several soldiers in Bosnia practicing loading a wounded soldier onto a stretcher for transport in a helicopter. Photo provided

He also handled the case of an intelligence officer that received a “Dear John” letter from his wife.

“He walked into a mine field because his wife had divorced him. Luckily for him, he didn’t blow himself up. I was on call that day and I got him. What I did was coordinate mental care for him and passed him on to someone else.”

When Rodriguez-Martin was called back in October, he served as a replacement doctor.

“I was a replacement doctor for one of the doctors who went to Iraq or Afghanistan,” he said. “Mostly I saw a lot of families who were left behind.”

“These families were supportive of what their loved ones were doing, but there was a lot of stress and depression. I’ve got a lot of respect for the military community because it’s very hard on them.

“They show great dedication and they’re all doing their jobs professionally. You have to have admiration for our military men and women,” the doctor said.
“Then when you go overseas, you see how people suffer from war. What you don’t see over here on the news is how grateful the people are that we help. You see people crying when you leave after being there three months,” he said. “You see what the United States and other countries do for people overseas and it makes you proud.”

But being a part-time soldier and a full-time doctor is tough on Rodriguez-Martin’s family practice.

“The Army does its best to give you a month or two notice before you’re called up. Most of my patients understood, and they were fine,” he said.

Maj. Arturo Rodriguez-Martin, right, in front of a rescue helicopter with its pilot when Rodriguez-Martin served with a U.S. Army medical unit in Bosnia in 2002. Photo provided

Being away in the military hasn’t been easy for his wife, either, Rodriguez-Martin said. “It’s hard on her taking care of everything at home and our son who is almost 2 years old, too,” he said.

Rodriguez-Martin’s current tour of duty runs out this summer. He probably won’t re-up.

“I feel I have done my part to serve the country. It’s very hard on my practice and my patients to have me going off in the service,” he said.

This story was first published in the Charlotte Sun newspaper, Port Charlotte, Florida on Sunday, Jan. 15, 2006 and is republished with permission.