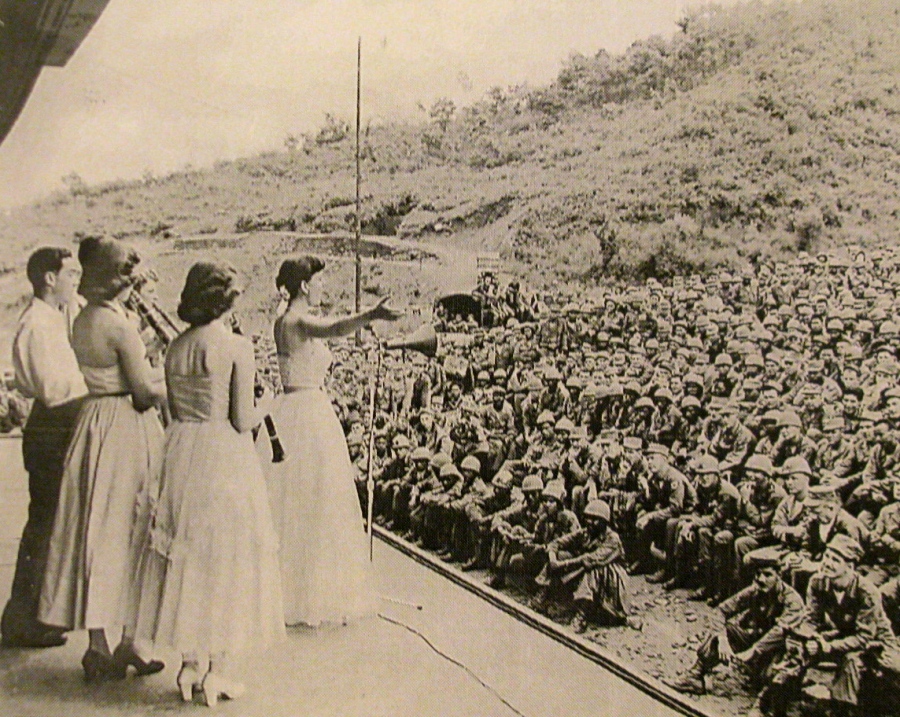 Cpl. Burton squats with his Speed Graphic camera in the bottom right-hand corner waiting to get a shot of a USO Troop visiting the 7th Division along the DMZ shortly after the end of the war in 1953. Photo provided by Roger Burton 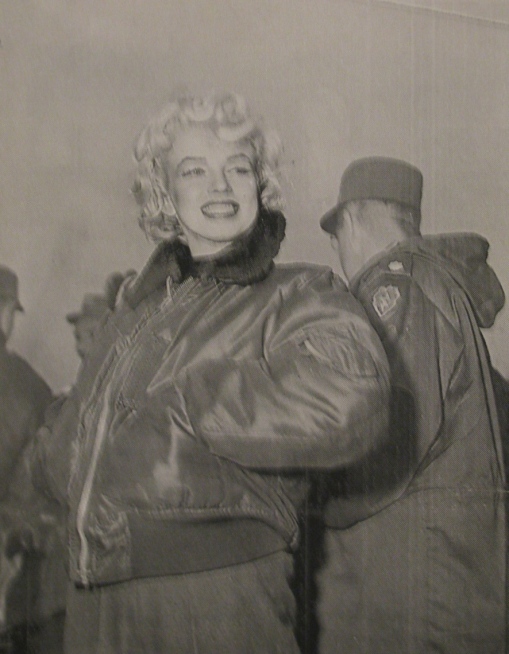 Marilyn Monroe visits 7th Infantry Division soldiers along the DMZ in Korea in February 1954. She toured the country putting on shows for servicemen even though she and Joe Dimaggio were supposed to be on a honeymoon in Japan. Photo provided by Roger Burton

Roger Burton is no war hero. In fact, he missed the whole war.

The infantry corporal was a couple of weeks too late for the Battle of Pork Chop Hill, one of the nastiest engagements of the Korean War.

“By the time I arrived at the DMZ (Demilitarized Zone) as a replacement soldier in the 7th Infantry Division, Pork Chop Hill had been fought two or three weeks earlier in June and July of 1953,” said the 71-year-old Punta Gorda, Fla. man. “The war ended on my birthday, July 27.”

“I heard all these war stories from guys who had been in the thick of it. These guys would take their shirts off and they would be all scarred up,” he said.

By mid-April, the Battle of Pork Chop Hill erupted. The 7th Division’s 17th and 31st regiments sustained heavy casualties trying to hold the hill. An entire Chinese regiment was wiped out trying to take it back.

Two months later, the Korean War ended with the signing of the armistice at Panmunjom. Burton missed it all.

The high point of Burton’s military career came in February 1954 when Marilyn Monroe flew to Korea to entertain the troops. By then, he was co-editor of the Bayonet, the 7th Infantry Division’s eight-page weekly newspaper.

“She and Joe DiMaggio were on their honeymoon to Japan,” Burton recalled. “She came to Korea to strut her stuff for the troops. Joe got all mad about it.

“Marilyn first flew into Seoul. Then she visited the various Infantry divisions along the DMZ,” he said. “She went by Jeep or helicopter from one division to the next. She’d put on a show, but you couldn’t get anywhere close to the stage when Marilyn was entertaining.”

When Cpl. Burton arrived in Korea during the summer of 1953, he was assigned to 17th Buffalo Regiment of the 7th Division dug in along the DMZ. By this time, the war had ground down to a stalemate, and peace talks were well under way. The 17th was comprised mostly of United Nations soldiers from Colombia, South America.

At 22 young Burton is in the field possibly running down a lead on a news story. Photo provided by Roger Burton

“Primarily, I helped Bolivian officers with their English,” Burton said. “I did that for two months until I got assigned to the 7th Division’s headquarters. At the time, my commanding officer told me I was going to work on the Bayonet’s editorial staff.”

Burton knew nothing about newspapers or journalism. What apparently qualified him for the job was that he had attended Indiana University and was in his junior year when he dropped out of school and signed up for the draft. He had enough education to do the job.

“I was told to report to a quonset hut where a couple of soldiers collected copy for the next edition of the paper. They were sitting there with old manual typewriters when I walked in,” he said. “Each regiment had a reporter who got news and wrote stories. These stories were passed on to division headquarters, where the two guys behind the typewriters put it all together.”

They gathered all the copy and pictures the first four days of the week. Then Burton and the editor would spend the next three days in Seoul at the Korean Times newspaper shop, where each edition of the Bayonet was composed and printed. When they returned, they would bring the finished paper back with them for the 20,000 soldiers in the 7th Division.

“The problem was that the compositors at the Korean Times didn’t know English. And, they had to set each letter by hand,” Burton said. “Once a page of type was set in a galley, they would pull a page proof and then the editor and I would make corrections. The two of us worked in a little room, circling the upside-down or backward letters on the galley proofs. Each mistake had to be circled with the proper symbol so the Korean typesetters could correct them.”

For three days they worked feverishly, correcting and re-correcting updated proofs. The mistakes would be reduced from hundreds to dozens to eventually a handful. Finally, they’d run out of time and the Bayonet would go to press in the middle of the night.

Their paper was distributed to the 7th Division troops in the trenches with the help of Army trucks operated by the staff of Stars and Stripes, the military daily newspaper published by the troops for general consumption of all service personnel. Stars and Stripes truckers would drive the paper 60 miles from Seoul back north to the DMZ. 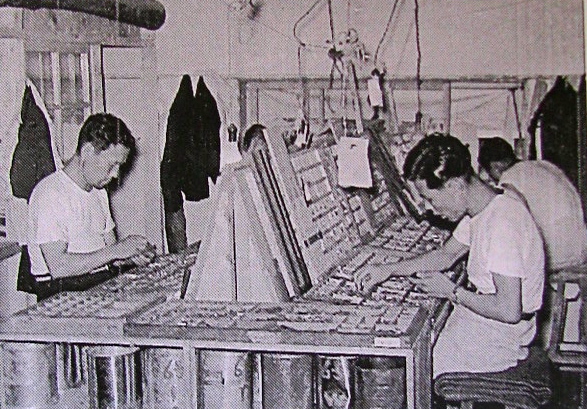 The back shop at the Korean Times in Souel assembles the 7th Division’s weekly newspaper even though they don’t know a word of English. Photo provided by Roger Burton

The weekly routine was interesting and a lot more creative outlet for Burton than most of his foot-slogging buddies in the trenches experienced. When he wasn’t helping with the paper’s production in Seoul, he was out covering 7th Division happenings with his Speed Graphic 4-by-5-inch sheet film camera.

To load a Graphic, a photographer had to put fresh sheet film in a film pack that slid in the back of the large, boxy camera. This process had to be accomplished in total darkness.

“We’d go in a tent and put a sleeping bag over our head and load the film packs in the dark inside the sleeping bag. Once we shot the film, we’d send the undeveloped packs to the Korean Times for processing. We never saw what we shot until it made it in the paper,” he said.

The Bayonet was a compilation of stories about USO shows that had just appeared, upcoming shows, soldiers receiving medals, troops being promoted, pictures of pretty models and corny cartoons. Inside there were articles on generals relocating to other commands. In one edition, there was a double-page spread on two facing pages about the 32nd Regiment, first organized in 1916 in Oahu, Hawaii. It was known as the “Queen’s Own” and the spread included a historical story on the regiment with eight accompanying pictures. Sports stories and pictures covered the back page. The lead sports story in one edition notes: “The Bayonet Baseball League came to a close with the 31st Infantry Bearcats carrying first-place laurels into the I-Corps playoffs, despite three straight losses in the final week of Division play.”

“If there was a breaking news picture, sometimes I’d get to fly in a Piper Cub artillery spotter plane from the DMZ back to Seoul to take some rush pictures that had to make the next edition of the paper,” Burton recalled. “That made my job interesting.”

Every so often the staff of the Bayonet would screw something up big time. The mistake he recalls most vividly after 50 years was when the Korean staff at the Times in Seoul accidentally swapped the lead pictures on page 1.

“There was supposed to be a picture of a general awarding a medal to somebody on the front page. Instead, the compositors put the picture of a USO showgirl on page 1,” Burton remembered. “There was a big stink raised about this mistake. After that, we had to stay around the shop and check the paper until it was ready to go to press.”

Until then, he and the editor would split early in the evening. They would go into Seoul for what little action there was in the burned-out capital city.

Six months or so before Burton was due to return to the States, he became the Bayonet’s editor-in-chief — kinda.

It was a very unceremonious event. The proceeding editor was homeward-bound, and Burton stepped into his shoes as the man in charge.

“However, a short time later, a guy named Finefrock joined the paper’s staff,” he said. “He had a degree in journalism and was a real newspaperman. I told my commanding officer Finefrock should be the guy in charge because he was the man with the experience in the field. They made us co-editors.”

“We rotated home every 16 months. When you saw your own name up on the bulletin board you could hardly believe you were going home,” Burton said. “It was interesting duty in Korea, but I was anxious to get back home and complete college.” 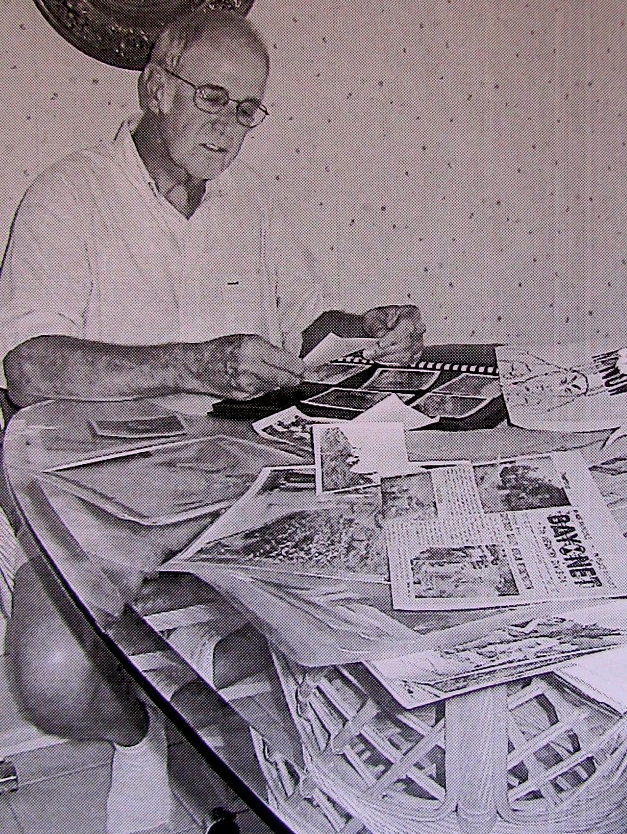 Roger Burton looks through a table full of pictures, papers and clippings covering his time as editor of a weekly newspaper at the end of the Korean War. He and his wife, Nancy, now live in Punta Gorda . Sun photo by Don Moore

He returned to the United States in December 1954, graduated from Indiana University with a degree in marketing a year or so later, went to work for a company that made stainless steel pipes and married Nancy, his girlfriend from the next town in New Jersey where he grew up.

This story was first published in the Charlotte Sun newspaper, Port Charlotte, Florida on Sunday, July 6, 2003 and is republished with permission.