Sgt. Earl Schworm is going to church in a school bus one Sunday in Iceland. He was serving with the 932nd Control and Warning Battalion near Rockville Air Force Base in the southwestern part of the barren, treeless country. His job was to help run a radar station that was part of the DEW Line early warning system. Photo provided.

Earl Schworm, who lives in Boca View condominiums in Placida, Fla., served as a member of U.S. Air Force’s Control and Warning Battalion 932 in what became known as the “Intercept Capital of the World” during the “Cold War” of the 1950s. His job: tracking Soviet strategic bombers trying to penetrate U.S. air space.

Schworm worked at an early warning radar unit, part of the “DEW Line” in Iceland maintained by the Air Force to keep tabs on all aircraft and ships approaching the U.S. over the North Pole. The Russians provided most of the action in the far north for American radar crews.

“The Soviet Air Force was constantly thwarted in their attempts to penetrate the skies over Iceland as they headed toward the USA,” Schworm explained as he read from information produced by Peterson Air and Space Museum at Peterson Air Force Base, Colo. “More Soviet ‘Bear’ bombers were intercepted by U.S. fighter planes over Iceland than all the other U.S. Air Force radar sites in the world. More than 3,000 Soviet bombers were turned back by American interceptor aircraft during a 40 year period after World War II.”

Until relatively recently this information was classified “SECRET” by the air force. When Schworm stood an eight-hour watch as a corporal at a radar dome in the frozen north country, he said the enlisted men he served with were not told what the U.S. fighter planes they scrambled intercepted over Iceland..

He learned 40 years later what they were doing up there and why by attending reunions of his Air Force unit in the past few years. 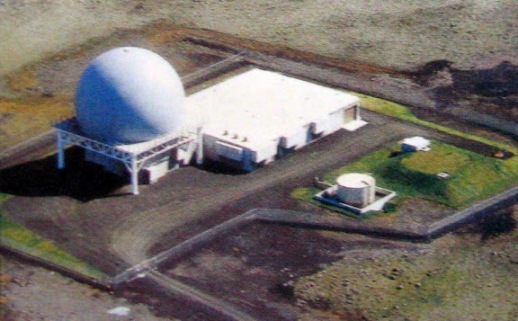 This was home sweet home for Schworm when he served with the Air Force’s 932nd Control and Warning Battalion in Iceland. As a sargent he spent a year working as part of the staff of this radar unit trying to kept the Soviet Air Force from penetrating U.S. air space. Photo provided

Like thousands of other young men his age, in 1951 he graduated from high school and joined the Air Force so he could fly and avoid the ground war in Korea that was raging. Schworm and a handful of other airmen wound up in Venice running a Loran Navigation Station on the beach.

“In 1954 the Loran staffers lived upstairs in the El Patio Hotel on West Venice Avenue a couple of blocks from the beach.” he said. “I went down stairs to the drugstore to get a glass of orange juice one evening and ran into Lavohn Gault, my future wife. She was selling senior play tickets in the drugstore.

“I told her I’d buy two tickets if she’d go to the play with me. She turned red and didn’t know what to say,” he recalled with a chuckle. “Her girlfriend, who accompanied her, told Lavohn, ‘Go to the play with Earl. I know him, you’ll have a good time.’

“When I returned to my apartment where I was living with another airman I told him, ‘I just met the girl I’m gonna marry, if she’ll have me.’ It was shortly after that all 21 of us who were running the Loran Station in Venice were sent to Iceland.

It was another world leaving sunny Venice and going to dreary, cold drab Iceland for the next 12 months. 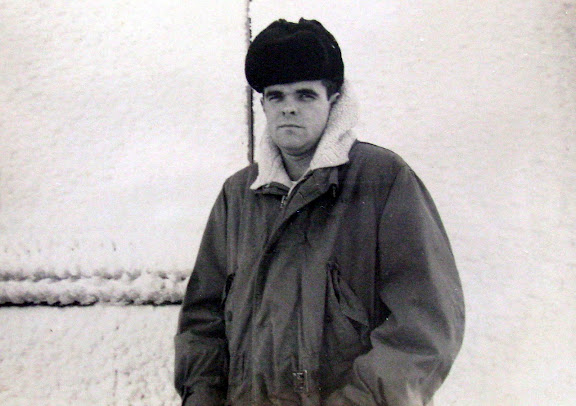 Schworm was all bundled up in his parka. At the time he was in the Air Force serving with a radar unit that was part of the DEW Line in Iceland. Photo provided

“Our job up there was to run a radar station 50 miles south of Reykjavik, the capital of Iceland. We tracked everything coming across the North Pole,” he explained. “We had interceptor fighters based next to us that would go up and check out whatever we found flying over the Island headed toward the U.S.”

There wasn’t much to their base. It was primarily a radar station with a chow hall, barracks, softball diamond. There was little more except volcanic rocks and no trees as far as the eye could see.

“The temperature never got too cold because of the Gulf Stream. It was about the same temperature as Boston, Mass. In the summer time it was around 70 degrees. In the winter it got much colder and the wind could blow 100 mph or more on any give day,” Schworm said.

He started out plotting invasive airplanes on a giant screen of the area and ended up working in the airplane identification section before he left Iceland. To break the boredom of the place he became friendly with one of the interceptor pilots in the nearby airbase.

In his off time he might take a ride on an F-89 “Scorpion” jet interceptor, a helicopter or whatever to do something different to pass the time.

About the most exciting thing that happened to him while serving at the radar station was the day a Soviet “Bear” four-engine bomber tried to elude their radar.

“This time a Scandinavian Airliner was flying across Iceland toward the United States but something didn’t look right. We scrambled our fighters. About the time they rendezvoused with the airline a Soviet ‘Bear’ bomber broke away from under the airliner and headed back toward Russia. The pilot of the commercial plane didn’t know the bomber was underneath him.

After a year playing aerial tag in the Arctic with the Soviets, Schworm was reassigned to a four-engine Air Force RC-121. It was an airborne radar station flying out of Otis Air Force Base in Massachusetts they made 15 to 18 hour flights over the North Atlantic searching for anything trying to invade the U.S. They were an extension of the Icelandic Dew Line.

“I was a staff sergeant in charge of the radar on the airplane,” Schworm said. “I had a group of enlisted-men working for me who ran the radar units.”

“No Russian plane ever reached the lower Dew Line while I was in the air,” he said. A year later Schworm returned to his gal, Lavohn, after four years of service in the Air Force.

“Unbeknownst to me, she took an airplane and met me at my folks’ home in Edmeston, N.Y., a dozen miles from Cooperstown,” he said. “I had a surprise for her, too, a diamond engagement ring.”

Lavohn had graduated from Venice High School the year before. She was attending Florida State University in Tallahassee as a freshman.

“When I got out of the Air Force I got married on July 21, 1956 in a church in Nokomis, north of Venice,” he explained. “I took the G.I. Bill and got my Master’s degree in Education.”

Then he went to work as a teacher in the Bradenton area, north of Sarasota, Fla.

After the better part of 20 years working as teacher and principle Schworm grew bored with the education and decided to go in the trailer park business. In the 1970s he built a park on some of his father-in-law’s land in Placida, south of Englewood, and spent the next decade or so as the owner-manager of and Warning Mobile Home Estates, a successful 176 unit trailer park.

At 79 he and his wife are retired and live on the sixth floor of one of the big condominium units at Boca Vista that overlooks the placid waters of Gasparilla Sound to the west and to the east is the mobile home park he once owned. They have two children: Mike and Karen.

This story first appeared in the Charlotte Sun newspaper, Port Charlotte, Fla. on Monday, March 26, 2012 and is republished with permission.