When this picture was taken Richard Young was a seasoned soldier. Note the campaign ribbon on his chest signifying he served a tour in Afghanistan. Photo provided

John Albanese was surprised when he opened the door of his Deep Creek, Fla. home Saturday two weeks ago and found Richard Young, his nephew who recently returned from a tour in Afghanistan with the United States Army, standing there.

“He caught me by surprise. I never saw it coming,” his uncle who served with the 1st Marine Division in Vietnam, said a couple of days ago. “I’m going to do something special for you when I get home,” Richard told him.

Standing at his front door Richard had the “Something Special” in his hand. It was a folded American Flag in a display case with an accompanying certificate of authenticity which read:

“This is to certify the accompanying American Flag was in the face of the enemy over the Headquarters of the Joint Provisional Reconstruction Team, Paketika Forward Operating Base, Sharana, Afghanistan during Operation Enduring Freedom.

“When he handed me the flag and the plaque with my name on it it made me cry,” John said. “Marines aren’t suppose to cry, but I did.”

When Richard was growing up in Cambridge, Mass. John was the guy he came to.

John Albanese (left) talks with his nephew, Richard Young, who recently returned from a nine-months tour in Afghanistan with the Massachusetts National Guard. They are holding a special American flag that flew over the battlefield and its accompanying certificate of authentication. Richard gave John the flag as a surprise Christmas present for being his mentor. Photo provided

“I use to listen to my uncle’s stories about serving in the Marine Corps during the Vietnam War,” Richard said. “My uncle is a good guy. He’s always given me good advice and pointed me in the right direction.”

“To me Richard is a hero. He’s a responsible 24-year-old man who wanted to fight for his country,” John explained. “My nephew said, ‘We shouldn’t be over there in Afghanistan because they don’t want us there.”

“The same thing happened with us in Vietnam,” John explained. “But Richard added, ‘What I did over there I did for my country.'”

For nine months he served with Charlie Company, 18/1st. in Paktika, Afghanistan protecting a construction brigade constructing schools and other buildings. 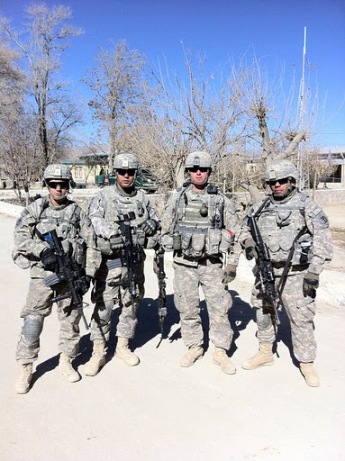 Spc. Young, far left, and his fire team consisting of: Spc. Desouza, Sgt. Maniero, the team leader, and Spc. Ramos. They had just completed a patrol through Paktika where they were located in Afghanistan. Photo provided

“He doesn’t like to talk about the fire fight he was in protecting the constructing brigade. He was in a big incident over there,” John said.

Summing up his nine-months tour of duty in Afghanistan, Spc. Richard Young said, “I believe it will turn into a civil war over there once we leave the country.”

This story first appeared in the Charlotte Sun newspaper, Port Charlotte, Fla. on Monday, Dec. 26, 2011 and is republished with permission.