2nd Lt. Thelma Daida of Port Charlotte, Fla. is pictured in her fatigues while taking basic training at Shepard Air Force Base in Texas in 1965. She spent a year serving as a surgical nurse in the Air Force in Vietnam. Photo provided

1st Lt. Thelma Daida was a surgical nurse working in the only in-country U.S. Army Air Force Hospital in Vietnam in 1965 located on the giant airbase at Cam Rahn Bay. It was an exciting time to be a 20-year-old nurse serving in Southeast Asia.

“I wanted to become an artist, but my mother told me: ‘Become a nurse an you’ll always have a job. I took her advice and became a Registered Nurse,” the 67-year-old local resident explained. “After graduating from nursing school my girlfriend and I decided we were going to joint the Air Force and see the world.”

The two young nurses signed up for a two year hitch in the Air Force. They took basic at Shepard Air Force Base in Texas. It was nowheresville.

“At the end of our first year in the Air Force both of us were so miserable we volunteered for Southeast Asia. My girlfriend went to Thailand and I went to Vietnam,” Daida said.

Cam Rahn Bay was a garden spot situated on a peninsula jutting out into the sea. There were beautiful beaches and no enemy activity in the area.

“I worked as a medical-surgical nurse in a new hospital that had just been built to replace the old one that had blown down in a storm,” she said. “This was a training hospital where we handled mostly male Air Force patients.”

Daida said the facility wasn’t relegated entirely to Air Force personnel. A number of wounded soldiers were sent there, too. In addition, they also treated civilian South Vietnam residents. 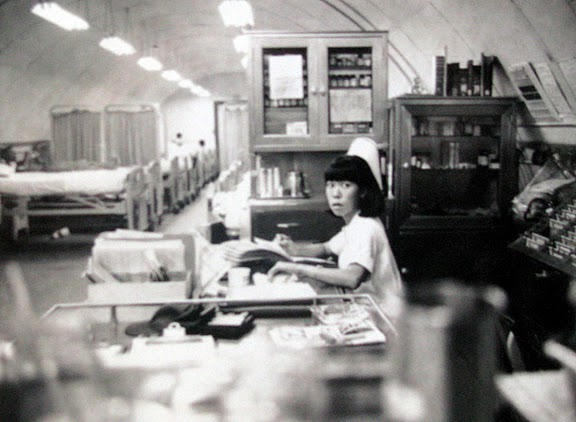 1st Lt. Daida is on duty in the hospital at Cam Rahn Bay where she spent most of her time while serving in Vietnam in 1966. Photo provided

“I arrived at the hospital in June 1967. Our base was very secure and we weren’t mortared by the enemy during the year I was there,” she said. “It was a far cry from Danang where I spent 10 days. While there we had to wear our flak jackets at all times and the enemy mortared us almost every day,” she said.

“I kinda felt guilty while serving in Cam Rahn Bay because of our lovely beaches. Because there were 50 nurses and a bunch of Red Cross girls there on base beach parties were a frequent occurrence and alcohol flowed,” Daida recalled.

Conditions in Danang were far different. She was sent there to help triage the wounded that were brought in. Some were too far gone to help. Daida was sent there to assist the doctors decide where the badly wounded service personnel should be sent: back to the States, Japan, Guam, or Germany.

“I lived a very sheltered life a Cam Rahn Bay. All our patients were ambulatory. Going to Danang to help handle the badly wounded was my first and only experience, till that time, working with the nearly dead. Oh my, it was an eye opener,” Daida said.

When she came back to the United States in June 1968 she got out of the Air Force and went into nursing at a California hospital for three years before deciding to try nursing in the Panama Canal Zone.

“I became a civilian employee working for the U.S. government. I spent the next 26 years as an operating room nurse in the Canal Zone. I worked in Balboa on the Pacific side of the Canal Zone,” she said. 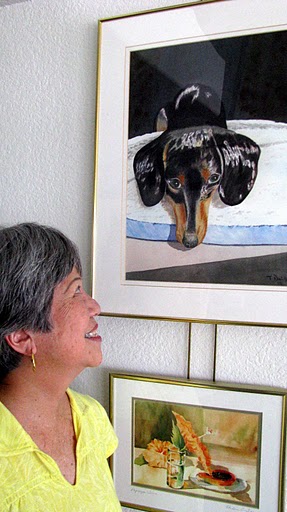 Daida looks at a watercolor of her dog “Dieter” she painted that’s on the wall of her dining room. Sun photo by Don Moore

Daida worked in a 400-bed teaching hospital. Most of her time was spent treating Panamanians suffering from all kinds of tropical diseases one rarely sees in the states. In June 1999 she took early retirement and moved to Charlotte Harbor.

“I heard about this area from a friend who lived with me in Panama. My friend ended up buying one of the first houses on this street overlooking the Peace River,” she said. “We have several other people who spent time living in Panama for years.”

Now days Daida spends much of her time painting for pleasure.

Looking back on her military career and her almost three decades in the Panama Canal Zone, Daida said, “Overall life in Cam Rahn Bay was very good for Air Force nurses. The Canal Zone was a wonderful place to be with a colony of wonderful people.”

This story was first printed in the Charlotte Sun newspaper, Port Charlotte, Florida on Monday, Sept. 19, 2011. It is republished with permission.