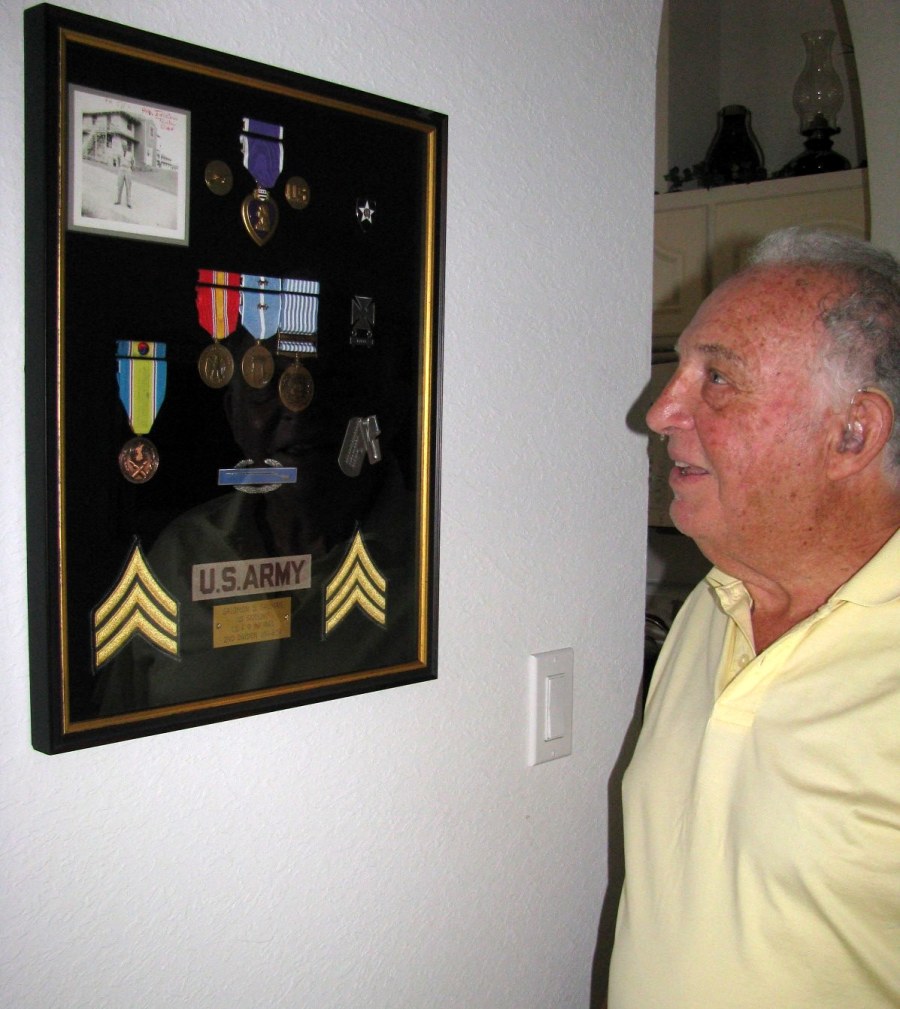 Sol Shuman looks at his military commendations. He was wounded in the Korean War by an enemy mine. Sun photo by Don Moore

Sol Shuman of Lake Suzy, east of Port Charlotte, Fla., was a platoon sergeant in the Indian Head Division, 2nd Infantry Division that went to Inchon, North Korea with Gen. Douglas MacArthur and his troops, in January 1951. Mac Arthur was headed for China.

“Operation Killer is what the action we were involved in was called. “We were told anyone with slanty eyes we were to kill,” the 86-year-old Korean War veteran said. “The North Koreans had broken through our lines and almost pushed all the United Nations troops out of South Korea. It was at this point MacArthur made his end run around the invading forces at Inchon. MacArthur wanted to go all the way into China, but President Harry Truman stopped him.”

Eventually the unmanageable general was fired by Truman. He was replaced by General Mathew Ridgeway. By this time Shuman had spent weeks on the front lines battling North Korean and Chinese forces.

Sol Shuman of Lake Suzy was a platoon sergeant who served in the 2nd Infantry Division in Korea during the Korean War.

“I was a recoil-less rifleman with a .57 millimeter gun. I had a squad of seven helpers,” he said. “We spent 55 days on the front lines without stopping until we ran out of food and ammunition. It was 20 below zero,” the old soldier explained.

“As many as 10,000 Chinese would charge our lines at a time. Thank God they didn’t have many weapons,” Shuman said. “On day we stopped an old lady walking toward our lines with two children who appeared to be about 10. She raised her arms and when she did there was a bomb under each arm that blew up killing her, the kids and it injured several of our soldiers.

“They would scare us to death at night by blowing their bugles and beating on drums before attacking. It was really scary, believe me,” he said.

“At one point we were completely surrounded by North Korean and Chinese soldiers. Capt. Hill was our company commander. He was the greatest company commander in the Army,” Shuman recalled. “He was from Texas and had two .45 caliber pistols strapped to his waist. In two seconds he could shoot you right between the eyes with his .45s. Capt. Hill killed 20 enemy soldiers breaking through the encirclement as we followed behind him firing with our M-1s.

“I was on a night patrol with six or eight other men bringing up the rear. A North Korean soldier slipped up behind me and put a wire around my neck. I pulled a dagger I had in my boot out and stabbed him in the stomach. He let me go. I turned around and shot him dead with the .45 I was carrying,” he said.

“We had to hold this hill. All of a sudden we were attacked by 300 Chinese soldiers and Mongolian giants,” Shuman said. “There was a dozen or so seven-foot-tall Mongolian without guns. I think they might have had pointed sticks. I was scared to death.

“I shot one of them seven times with my M-1 rifle, but he didn’t fall over. They were unbelievable,” he said “We dropped back about a quarter-mile and called in the artillery. After that we called in our planes that dropped napalm.

“Our company lost three soldiers crossing a small stream north of the 38th Parallel dividing North and South Korea. The enemy had a machine gun set up in a cave atop a hill about 300 yards away, “Shuman said. “The captain told me, ‘Get ‘em Sol.’ I set up my .57-millimeter recoil-less rifle. I was nervous because I knew if I didn’t kill the machine gunner our people were going to be in trouble.

“I fired an exploding round at the machine gun nest that could kill 20 or 30 people. My shot was perfect and it took out the gun,” he said. “The captain came over to me and gave me a hug and said, ‘My God you gave ‘em a blast.’ It was a lucky shot.”

All of these soldiers, except Sol, were killed when an enemy artillery round hit them. They were his ammo bearers for his .57 millimeter recoil-less rifle squad. Photo provided

Shuman’s unit was given a five day break after almost two months on the front lines. They were moved back from the front about five miles and provided showers, new clothes and Campbell’s Tomato Soup, the first hot meal they’d had in days. Then they were sent back to the front.

“We took this hill away from the enemy and were in the process of setting up my recoil-less rife. A pathway had been cleared through an enemy mine field to the top of the hill,” he said. “There was South Korean soldier carrying ammunition for us. He didn’t listen to me and walked outside the pathway. He stepped on a North Korean mine that blew him to pieces. It blew me 15 feet in the air. I was covered with shrapnel and temporarily lost my eyesight.”

Shuman was taken to a MASH unit where doctors worked on him. He was transferred to a Soul hospital and got additional treatment. He ended up in an Army hospital in Tokyo where he received superb treatment from a doctor from Chicago.

“An Army chaplain stopped by and told me, ‘I have some bad news for you. All of your .57 millimeter squad was killed by an incoming enemy artillery round.’

“Although I was still blind I jumped out of my bed and started running around the hospital banging into walls. It took six people to get me quieted down.”

Eventually he regained his sight and was sent home. After a 30 day leave Shuman returned to Indian Town Gap, home of the 2nd Division, and trained troops headed for Korea and the war.

“It wasn’t easy doing this. I didn’t like training troops to go over there and get killed,” he said. He continued working with recruits until he was discharged four months later.

“After I got home I had terrible nightmares. I relived all my bad experiences in Korea. I remember the guys in my rifle squad who were killed by the artillery round,” he said. “I still feel guilty after all these years because I survived and they didn’t. It’s terrible.”

After decades working in the jewelry business in Rhode Island, Shuman and his wife, Roberta, moved to Lake Suzy in 1991. They have two grown daughters who live in Rhode Island.

This story first appeared in print in the Charlotte Sun newspaper, Port Charlotte, Fla. on Monday, Feb. 15, 2010 and is republished with permission.