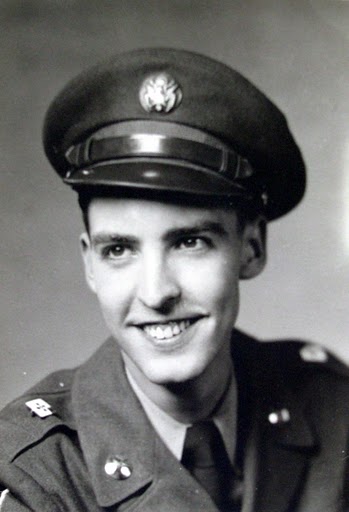 John Brophy of Heron Creek subdivision, North Port, Fla. was 21 when this picture was taken shortly after he graduated from boot camp at Fort Dix, N.J. in 1951. Photo provided

John Brophy of Heron Creek subdivision in North Port at 21 was 6-feet 3-inches tall and 120 pounds when drafted in 1951 during the Korean War. He was too skinny to fight.

“I was so thin they gave me a non-combatant MOS service number,” the 81-year-old former soldier recalled.  “When I went to the rifle range to qualify with my M-1 rifle the recoil from the rifle knocked the hell out of my shoulder. I kept a hand towel under my fatigues to pad my shoulder from the rifle’s recoil.”

While taking basic training at Fort Dix, N.J.  Brophy took an aptitude test that indicated he was a candidate for radio school after boot camp.

“I went to Radio Operator’s School at Fort Benning, Ga. and learned Morris Code, but I never got as good and wasn’t as quick with Morris Code as some of those guys in the Navy,” he said with a grin. “After we graduated our commanding officer called three of us out of the ranks and asked us if we wanted to go to Radio Repair School. We agreed and learned how to repair Walkie-Talkies and radios in Jeeps.

“After Repair School all of us sailed out of San Francisco aboard the ship USS General Breckenridge for the Far East. We were sent to Camp Drum, in Tokyo. Three of us were called out of a large group of radio operators and repairmen and sent to Kokura on Krushu, the southern most Japanese island. The rest of our unit went to the Korean War,” he said.

“I don’t think too many people know it, but Kokura was supposed to be the original destination for the second atomic bomb we dropped on Japan during World War II. Because of bad weather over Kokura the Air Force selected the secondary target–Nagasaki,” Brophy said.

Kokura has a huge Japanese Army Base located outside the city and it also had a big industrial complex during the Second World War. It was a perfect target for an A-Bomb, but was spared the holocaust because of the weather.

When Brophy was stationed there Kokura was an R&R base for American soldiers coming back from the Korean War. He spent just about half of his two year tour of duty there.

“The thing that brought the Korean War home to me in a hurry was one day I was running around the post delivering telephone books. I walked into this Quonset Hut I thought was an office,” he said. “I didn’t know it but I was walking into a grave registration unit.

“A large American flag was hanging from the ceiling accompanied by a sign that read: ‘SILENCE, RESPECT.’

“To my left was a big black guy stretched out dead on a gurney. There were rows with many bodies on other gurneys being processed to go home to the United States.

“It was very sobering for me. I was standing there looking at all those bodies and some guy yelled, ‘What are you doing here!’

“I don’t remember if he was a non-com or an officer.

‘Here’s your phone book’,” I said and added,’Goodbye.’  Then I slipped out the door I came in.”

He was a member of the Signal Corps’ Signal Service Unit # 8. Brophy’s job working as a corporal in charge of keeping the Teletype machines, and VHS radio equipment operation was pretty boring, he admitted 60 years later.

Their base supplied telephone and telegraph communications from Kokura to Seoul, Korea and back to Tokyo. Basically they were nursemaiding the electrical equipment and that was it. 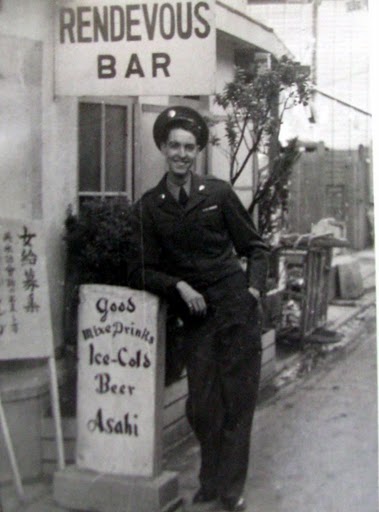 Brophy stands in front of one of his favorite watering holes in Kokura, Japan. Photo provided

One of the units’ nicer duties was communicating with the Japanese telephone operators down town. A section of these operators were dedicated to base communications. The soldiers got more than a little friendly with the girls downtown.

“I got invited to the Cherry Blossom Festival by a Japanese girl who took the American name Daisy. She kinda took a shine to me,” Brophy recalled. “While we were at the festival someone picked my pocket and took my wallet. Daisy was so embarrassed a Japanese person would do such a thing. She bought me dinner that night,” he said of the incident so long ago.

“I was on duty one night in the equipment building and one of our Japanese guards came running in to tell me an American soldier had just taken his rifle away from him,” Brophy said. “This soldier was from New York and he had always been a square peg in a round hole.

“I went into the American soldier’s room to see what was going on with him. When I walked in he pointed the carbine he had taken away from the guard at me and said, ‘You get the hell out of here!’ I told him, ‘Okay, I’m out of here!’

“I went back to my desk and called the Provost Guard. About that time we heard a bang. I ran back to the room and the guy was lying there on the floor with a hole in his shoulder. He had shot himself, but he wasn’t dead.

“After he recovered from the self-inflicted gunshot wound they court martialed him. I had to appear at the trial as a material witness. I tried to tell the court that this guy was really troubled, but the judge didn’t buy it,” he said.

One thing Brophy regrets: He didn’t tour the country when he had a chance during his year in Japan.

“It’s a beautiful country and the people are very nice,” he said. “When you’re 21 you’re not the sharpest knife in the drawer.”

During his time off he could often be found in a Japanese coffee house along a side street in Kokura. They served cold beer and the restaurant owner played the violin.

“It was a peaceful, nice spot,” he said.

Brophy was discharged from the Army after two years service at Camp Kilmer, N.J. on July 9, 1953. He took the G.I. Bill and went to college after his 24 months in the service.

He eventually went to work for Public Service Electric and Gas, the largest utility company in the state. He started with a repair unit fixing lightning strikes on transmission lines. Later he was moved to one of the company’s new nuclear plants, Hope Creek #1, along the Delaware River near Wilmington.

“When they started this plant I went from a technician to an engineer even though I didn’t have an engineering degree. I became the inspector for corrosion at the plant,” Brophy said. In 1988 he retired as senior engineer in his division.

He moved to West Coast Florida. He hadn’t been here long when he joined the Punta Gorda Yacht Club. That’s where he found, Kitty, his new wife who had recently lost her husband.

He has two grown children from a previous marriage: Kevin and Kathleen.

This story was first printed in the Charlotte Sun newspaper, Port Charlotte, Florida on Thursday, August 11, 2011 and is republished with permission.