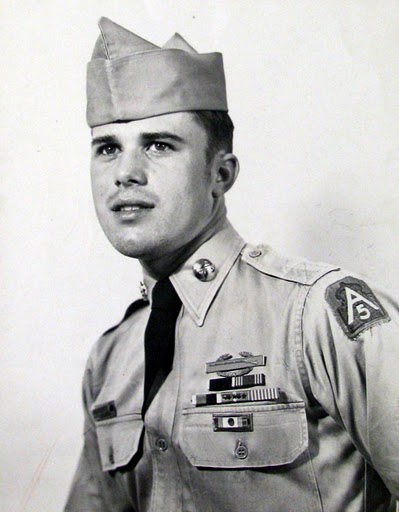 This was 20-year-old 1st Sgt. Larry Haynes of North Port, Fla. after he returned from the Korean War in 1951. Note the Combat Infantryman’s Badge on his chest and the Korean campaign ribbon with four battle stars signifying he fought in four major engagements. Photo provided

When the Korean War broke out in June 1950 Larry Haynes of North Port, Fla. was a 19-year-old Army corporal serving in H-Company, 17th Infantry Regiment, 7th Infantry Division in Japan.

“We made the Inchon Landing with Gen. MacArthur and the Marines in September 1950. The weather had turned bad and the rise and fall of the tide at Inchon was the big problem during the landing,” the former 80-year-old ‘Dog Face’ recalled.

“We faced little resistance during the landing and we weren’t there very long. We cut the North Korean’s supply line and they bugged out,” he said. “We boarded trucks and headed south diagonally across the Korean peninsula to the southern most port city of Pusan.

“At Pusan we boarded ships again and sailed around the tip of the peninsula to Iwon on the country’s eastern shore. Iwon was quite a bit north of the 38th Parallel that divides the north and south and we began our march to the Yalu River that separates North Korean and China 117 miles further up into North Korea.

“During the landing and on the way up we experienced little resistance from the North Koreans. By Thanksgiving MacArthur was predicting: ‘We’ll be home by Christmas,'” Haynes recalled more than 60 years later. “It was early December when we reached the Yalu.

“At this point the Army’s 7th Division and 1st Marines Division were attacked by tens of thousands of Chinese who came across the river and got in the war in support of their North Korean comrades. It’s been estimated we were outnumbered 16 or 20 to 1.”

Both the Army and Marines began their retreat from the Yalu to waiting LST’s (Landing Ship Tank) on the beach near Hamhung and Hungnam, 75 miles away. The beleaguered Soldiers and Marines were plucked from the clutch of defeat by U.S. Navy’s ships and transported south to Pusan and safety.

“The Inchon Invasion was MacArthur’s greatest victory in Korea. The Yalu River Engagement was his worst debacle,” Haynes said. “The general’s thinking was that the Chinese would not get in the war and the North Korean military would be brought to its knees at the Yalu. He was wrong.

“The weather was as big a problem as the enemy. It was -39 degrees and we weren’t properly dressed for the cold. For one thing we had leather boots and when they got wet in the snow your feet froze unless you were wearing a couple of pair of dry woolen socks.

“Our battalion colonel got us an extra pair of socks that we guarded with our lives. They were the difference between frost bite, which could cause your toes to turn black and fall off, and surviving with all ten toes,” he said.

In Haynes’ case he tried to keep his feet warm and dry with two pairs of socks, but he still got frost bitten toes that almost fell off. Both his hands were also frost bitten during the return march from the Yalu. His fingers are damaged and crooked today because of the cold he suffered during the war.

He was a staff sergeant in charge of a couple of .30 caliber machine-guns and a platoon of soldiers to operate them. His guns were often used to support the division’s infantry companies that lacked automatic weapon fire power.

“Because of the terribly cold weather many of our soldiers cracked. They would throw their weapons over the side of a mountain and sit down along the edge of the road and tell me: ‘Sergeant I can’t go any further,’ ” Haynes recalled. “I’d tell them: ‘There are no trucks for you to ride in. You either get up or you’ll freeze to death along the side of the road.’ Many did just that.”

As they came around the side of a mountain on the narrow dirt road during their retreat to the coast, the Chinese had blown a bridge across a deep gulch in front of them.

“The whole withdrawal came to a standstill while a young first lieutenant came up with an idea to bridge the gap where the bridge was out. He used sections of a World War II pontoon bridge that was dropped into us by parachute,” Hayes said. “Once the lieutenant got the pontoon sections the bridge was repaired within half a day and we were on our way again.”

Food was another big problem. All of their K-Rations were frozen solid in the cold weather. Soldiers and Marines came up with an ingenuous way to heat up their grub. They warmed it up by putting their chow cans on the manifolds of the trucks and tanks that survived the withdrawal.

The 7th Division returned from the Yalu disaster and once more landed at Pusan in overcrowded LST filled with thousands of unwashed Soldiers, Marines, and civilians. Haynes and the other members of his division were resupplied and ended up along the 38th Parallel dividing the two Koreas fighting in a series of deadly skirmishes including the Punch Bowl, Pork Chop Hill and the Iron Triangle.

Haynes is shown on a stretcher after being wounded by a concussion grenade at Checon-ni in June 1951 during the Korean War. U.S. Army photo

“I was injured by a Chinese concussion grenade that blew up between my legs. When they carried me off the hill at Checon-ni both my legs were hanging off the stretcher,” Hayes explained. “The doctors said I would never father a child. They were wrong.”

Taken to a MASH hospital, he started walking again in a couple of weeks. After Haynes recovered from his injuries, his days in Korea were numbered.

“By the time I got back to the States in 1951 I had been promoted to first sergeant. I was put in a MP (Military Police) battalion in charge of 26 other MPs,” he said. “I spent the next nine months patrolling Indianapolis, Columbus and Franklin, Ind. They said if I would re-up they’d make me a commission officer, but I said, ‘No thanks.’

“I got out of the service and married Evelyn, my high school sweetheart. We were married 57 years until her death two years ago,” Hayes said with a pained expression. “We have four boys: Dale, Gregory, Brian, and Donald.”

For decades he worked in the building trade. Eventually he owned his own air conditioning business in Warren, Mich.  He retired in 1987 and he and his second wife, Jeanne, moved to North Port.

This story was first published in the Charlotte Sun newspaper, Port Charlotte, Fla. on Monday, August 8, 2011 and is republished with permission.

Click here to view Haynes’ collection in the Library of Congress.

Lawrence “Larry” Stewart Haynes, 86, of Naples, Florida, formerly of Michigan, passed peacefully in his sleep surrounded by his family on Tuesday, June 20, 2017.

He is preceded in death by his wife Evelyn and siblings Robert, Richard, and Dorothy.

Visitation will be held at Fuller Funeral Home, 4735 Tamiami Trail East, Naples, Florida on Friday, June 23rd, 2017 from 2:00 until 4:00 pm with a prayer service at 4 pm. Additional services will be held in Michigan at a later date.