Tom Cory of Buttonwood Village mobile home park, Punta Gorda was an aviation mechanic who kept a “Tornado,” B-45C, atomic bomber flying. It was America’s first four-engine jet bomber built during the Korean War era of the early 1950s to deliver an A-bomb to an enemy target.

He served as a staff sergeant in the 4925th Test Group Atomic stationed at Kirtland Air Force Base in Albuquerque, N.M. beginning in 1952 until his tour was up in 1954.

“We tested all the planes the Air Force used to drop atomic bombs at Kirtland,” Cory said. “When they designed a new atomic bomb they would have to do 100 test drops with dummy bombs to make sure the ballistics were right and it dropped properly. 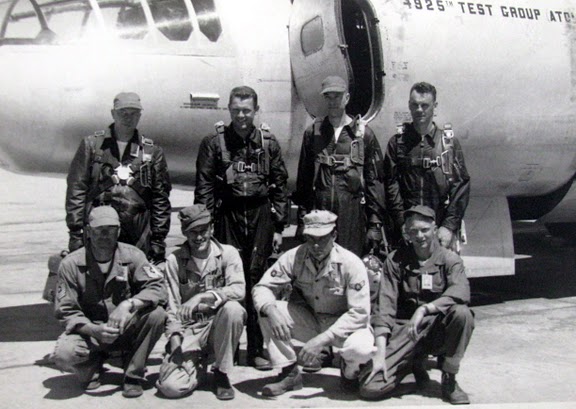 “Then they’d send us up in our B-45C to drop the real thing once a year because our plane was fitted with a Norden Bomb Site from World War II. We could hit the target better that the other bombers who had different bomb sites,” he explained.

“They would put troops and equipment around the area where the bomb was to be dropped to see what happened to the people and the equipment as a result of the bombing. The base where we dropped the A-bomb was 100 miles from Las Vegas, NV.

“They had all different sizes and kinds of atomic bombs. One was like solid steel and wiggled 40,000 pounds. It was designed to penetrate an underground concrete bunker. It would reach twice the speed of sound going down and go into a rock mountain 20 or 30 feet before exploding,” Cory explained.

Cory (left) and a buddy fuel their B-45C “Tornado” bomber at Kirtland Air Force Base in Albuquerque, N.M. during the early 1950s. Photo provided

“When they started dropping hydrogen bombs I believe they modified a B-52 “Stratofortress” and dropped the first one on Enewetak in the Pacific in March 1952. It just about disintegrated the whole island,” he said.

“One time we were part of an atomic test at a test base in Utah. We were carrying little, white, round plastic balls in our B-45C filled full of dye. They were dummy atomic bombs.

“I was flying in a B-17 bomber following our B-45C when it dropped these test A-bombs. The B-17 photographed the bomb drop to see where the dye splattered on the desert below.

“Then we were going to drop the real thing on the next flight over the desert test range, but at 30,000 feet the four atomic balls filled with nuclear material froze in their lead bomb racks and we couldn’t get them out because the temperature was -60 below zero at that altitude.

“When we dropped down to a lower altitude the balls came loose in the rack and started rolling around in B-45Cs bomb bay. They contaminated the plane with atomic radiation,” Cory said.

A B-45 “Tornado” bomber flies over the western desert of the United States during a test run in the early 1950s. It was the first U.S. jet bomber designed primarily to drop an atomic bomb. Photo provided

“When the plane returned to base we watched as a decontamination crew took 20-foot long tongs, removed the radio-active balls and placed them in a lead container to cart them off safely. Our bomber had to be decontaminated.”

During the three years Cory worked as a mechanic on a B-45C bomber at Kirtland Air Force Base his plane was used to drop three atomic bombs on the Utah Proving Ground during the early ’50s.

The B-45 never saw combat and lucky for all of us it never dropped the payload it was designed for. It was replaced by the B-47 that was also replaced by the B-52 bomber. The B-52 is still being used more than half a century later.

Cory got out of the service, married his wife, Barb, in 1953. They have seven children: Dale, Charles, Diane, Timothy, Dawn, Jill and Robert. For 30 years he worked for Timken Bearing Company until he retired and moved to Florida.