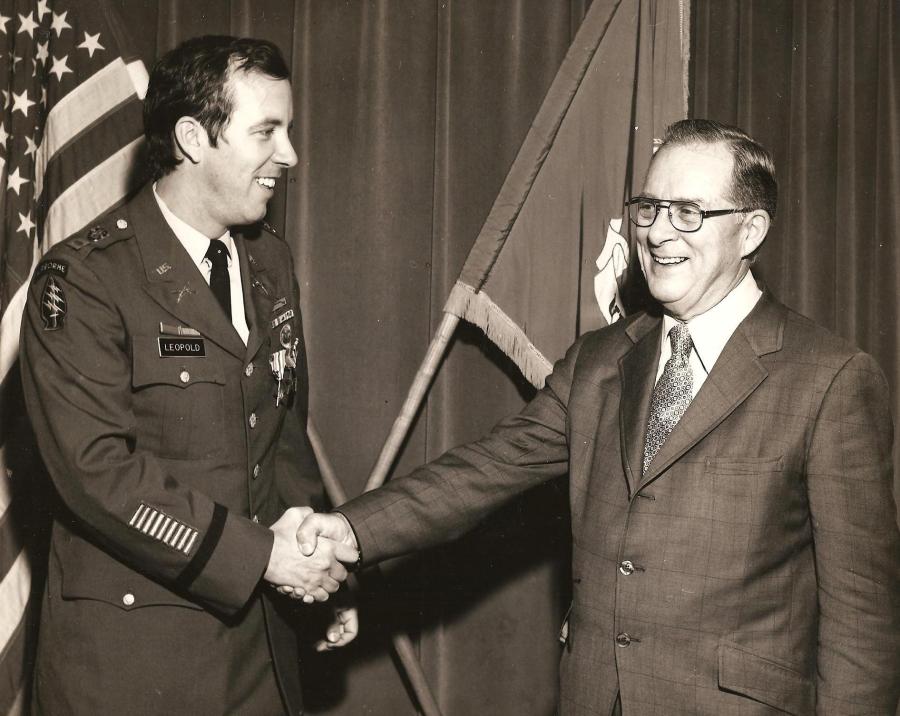 Stephen Leopold shakes hands with his father, Charles, at their first meeting in almost five years after his release from a North Vietnamese POW camp at the end of the Vietnam War in 1973. Photo provided

POW Camp 101 is what it was called. The camp was a hell hole located 20 miles outside Hanoi, North Vietnam. It’s where 100 American MIAs languished during the Vietnam War and nobody in the United States knew they were there.

A group of a dozen or so MIAs captured in the Central Highlands of South Vietnam by the North Vietnamese Army were marched from Cambodia to Laos and driven from there at night by truck to Camp 101 on Christmas Day 1968. 2nd Lt. Stephen Leopold, a Stanford Phi Beta Kappa, and a Special Forces Green Beret was one of the captives.

“I was put in solitary confinement in a black washed room for eight months and only let out to clean out my crap bucket and to splash a little water on my face at the cistern,” the retired Vietnam vet explained. “Then they’d march you back and you’d sit on your bunk in the dark.

The retired Army Special Forces colonel doesn’t say much about the brutal interrogations he underwent at the hands of his NVA captives except to note, “They were brutal for no reason.” He does say the people who held him prisoner practiced psychological warfare on him and the others until they day they were released from the POW camp in 1973.

Unlike U.S. Sen. John McCain and the other American pilots held in the “Hanoi Hilton,” the infamous POW camp in downtown Hanoi, their parents and the U.S. military knew nothing about POW Camp 101 and their imprisonment in North Vietnam. They weren’t allowed to communicate with anyone outside the camp. Since no one knew they were there, they received no letters or packages from their families.

After a diet like this for a few months Leopold weighed 106 pounds.

His life and the rest of the POWs lives at Camp 101 were radically changed because of the American commando raid lead by Col. Arthur “Bull” Simons on Son Tay, a POW camp not far away in North Vietnam. The colonel and his commandos rescued a handful of captured Americans, but most of them had been moved before they arrived.

“That Sunday morning after the Son Tay raid when they opened the door of our cells there were 300 North Vietnamese soldiers out digging a defensive position in the rain. They locked us in for a couple of extra days while they fortified the place against another possible attack by American forces,” he said.

“A few days later all of us were transferred to “The Plantation.’ This was a long-established show camp. We were put in warehouses behind the former French mayor’s two-story stucco mansion in Hanoi,” Leopold said. “The last two years of the war was nothing like the danger and brutality of the first three years. I lived in total darkness for eight or nine months. then I lived in total light in the Plantation.If you have a choice, it’s better to live in a whitewashed room with the light on.”

When he moved into “The Plantation” he also had two roommates. Joe Rose and Dick Ziegler moved in with me. They were two warrant officers captured in I-Corps,” he said.

“We got a new camp commander when we moved into ‘The Plantation.’ He was an old crusty guy who fought the French in Vietnam in the 1950s. He was a pretty nice guy that didn’t treat us badly,” Leopold said. “During the two years we were there they gave us some playing cards and I taught Joe and Dick how to play bridge. We’d spend three hours a night after dinner playing cards.”

Most of their knowledge of the outside world came from new prisoners who were brought in to their compound.

“I found out Stanford won two Rose Bowls in a row and Jim Plunkett was an All American football player at Stanford when I was in prison in Vietnam,” he said. “I learned the U.S. put men on the moon and Nixon was president from men who were newly captured POWs.

“Col. Ted Guy, who had been shot down over the DMZ and captured by the NVA, was sent over from ‘The Hilton.’ This fellow was the senior ranking officer in ‘The Plantation” when he showed up and he was a great man,” Leopold remembered. “He helped us organize our camp. When they’d get unhappy with us they’d beat the shit out of Guy and he’d keep right on organizing the POWs in ‘The Plantation.

“It was about Christmas time in 1972 when Ted arrived in our camp. It was the time the Americans started selectively bombing Hanoi with B-52s. After Nixon was reelected the North Vietnam finally realized the U.S. wasn’t going to leave the country without sort of peace treaty,” Leopold said.

“On the second day of the Christmas bombing the North Vietnamese rolled in with their trucks in the middle of our compound at night and took all of us to ‘The Hilton’ and put us in a wing,” he said. “I was in the last truck to leave our compound and saw the NVA setting up a SAM missile right where our prison had been. They knew the Americans would never bomb the area.

“We were living in ‘The Hilton” with 40 men in our room and a big bay window. We watched the air war and saw B-52s shot out of the sky over Hanoi. After two weeks of B-52 bombing there was a silence,” Leopold recalled. “In January 1973 our guards were the first ones to tell us the war was over. The Americans and the NVA had signed a peace treaty in Paris.

“One night in January the lights on the tower for Radio Hanoi were turned on for the first time in six or seven years. We knew the war was over when we saw that,” he said.

At that instance the American delegation in Paris was handed a list of 100 POWs that were all MIAs being held by the NVA primarily in North Vietnam. On the list was a name: 2nd Lt. Stephen Leopold, Milwaukee, Wis.

“An Army family assistance officer contacted my folks in Milwaukee. He told them, ‘Good News! Your son is among the MIAs. I’m bringing a bottle of Johnny Walker Scotch over.”

Like the 600 pilots held captive in ‘The Hilton,’ Leopold was flown by C-141 transport plane from Hanoi to Clark Air Force Base in the Philippines. He spent five days there being debriefed, checked by doctors and psychiatrists and then was sent on to an Army hospital in Denver, Colo. where his parents were waiting to see him.

“After I got out of the Army I decided to go backpacking around the world meeting my friends,” he said. ” I spent the next eight or nine months going around the states and the world. After almost a year I got homesick in Egypt and flew home to Milwaukee.

“In 1975-76 I was a teaching assistant in the Poly-Sci Department at the University of Wisconsin when i ran into a girl I had known earlier and we got married. I decided to put my education to good use and so I ran for the state legislature as a liberal Democrat and won that same year, ’76. I won and served four terms as a legislator.

“By 1982 I had two children, gotten a divorce and decided I’d had enough of being a state representative. I decided to go to law school. I graduated and became a lawyer in 1985, ” Leopold said. “I didn’t like being a lawyer. The best legal job I had was working as a clerk for the judge on the Wisconsin Court of Appeals.

“My best friend in high school was a successful lawyer in San Francisco. He asked me to come out and work with him. For the next four years I was a certified California lawyer. I spent my time on a lot of insurance defense, real estate law and personal injury cases.” 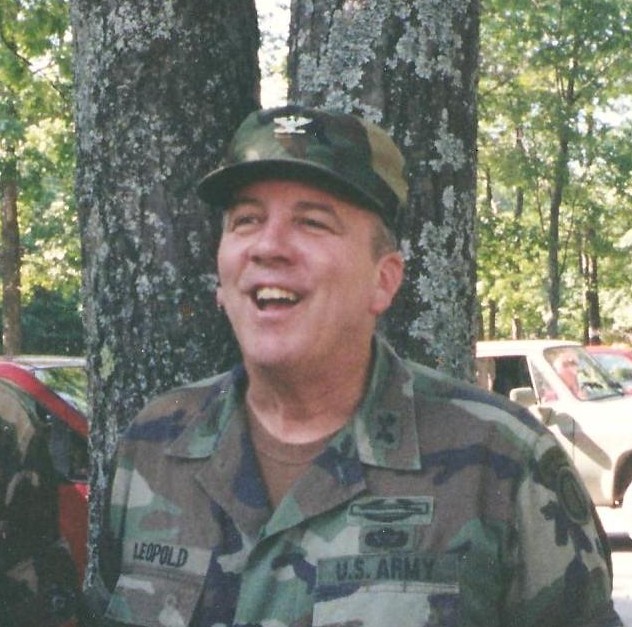 Leopold is pictured in his fatigues during an exercise at Fort McCoy, Wis. in 1995. Photo provided

He decided to move back to Milwaukee because of his kids. He became a one man law firm until he retired a few years ago. He also rejoined the 12 Special Forces unit in Chicago and retired from the Army Reserve as a bird colonel.

“I look at my career and realize it was one continuous downward spiral. I started out as a military officer. Then I went to an elected politician. From there I became a lawyer. Do you see the spiral downward?

“My POW experience was the most educational thing that ever happened to me,” Leopold observed. “If I could guarantee it would only last for 180 days I would sign up everybody, particularly my kids and grandchildren. They would learn what is really important in this world. What they would find out is that 97 percent of what we’ve got in this country are luxuries.”

This story was first published in the Charlotte Sun newspaper, Port Charlotte, Florida on Thursday, May 5, 2011 and is republished with permission.