Sgt. Jim Surber helps his 1st Sergeant with his back pack during a sweep in the Central Highlands of Vietnam with the 1st Air Cavalry Division in 1967-68. Photo provided

Jim Surber was a dogface in Company D, 6th Battalion, 1st Air Cavalry Division in Vietnam from March 1967 to March ’68. He rode to war in Huey helicopters.

“We might make three jumps a day from Hueys. They’d pick up several hundred of us and drop us in a landing zone. We’d make sweeps looking for the NVA (North Vietnam Army) in the dense vegetation of the Central Highlands,” the 64-year-old former cavalryman from Punta Gorda Isles recalled.

“We’d search two or three clicks out for NVA. If we found nothing they’d pick us up and drop us somewhere else to look for the enemy. Six choppers with 8 to 10 guys in each chopper would be dropped into the LZ (landing zone). The Hueys would make three or four runs to the LZ.”

Surber vividly remembers the night his unit was overrun by NVA regulars.

“We were dug in and had Claymore mines out in front of us for protection. There were two of us to a foxhole every 15 feet. We had 300 or 400 in a defensive parameter when the NVA attacked,” he said. “They came up the hill and ran through the Claymore (anti-personnel mines). We were firing illuminating flares and cutting them down with our weapons, but it made no difference. They ran right through us and kept on going. They must have been hopped up on something. 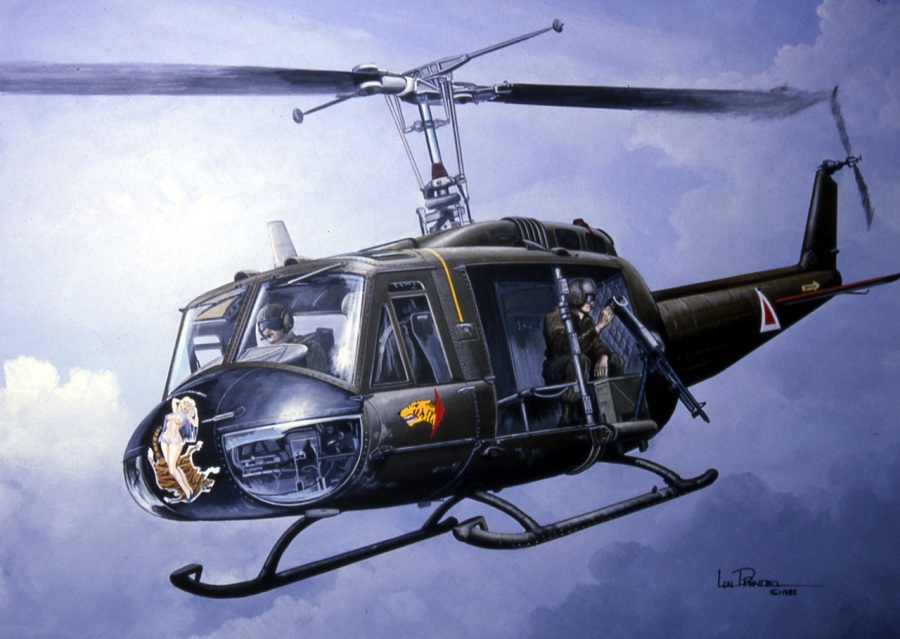 The Huey was the workhorse of the Air Cavalry in Vietnam. It flew young soldiers into battle and dead soldiers out of the war zone. Art courtesy  Lou Drendel/Aviation-Art.net

“The firefight lasted about 1 1/2 hours. It was one continuous battle,” Surber said. “The NVA lost a lot of soldiers, but we couldn’t find many after the fighting the next day because they drug their dead off.”

The area where the enemy attacked was elephant grass country. It was the home of the indigenous Montagnard people who lived in the Central Highlands. They were primitive “little people” who hated the North Vietnamese.

“What was hard about fighting in Vietnam was that one day you’d fly into an area and the officers would say we couldn’t shoot anything at all in that area. Another day you might land and be told you could shoot if they shot at you first. The next time you might be told you could shoot at anything that moved including water buffalo. We could kill anything,” Surber explained. 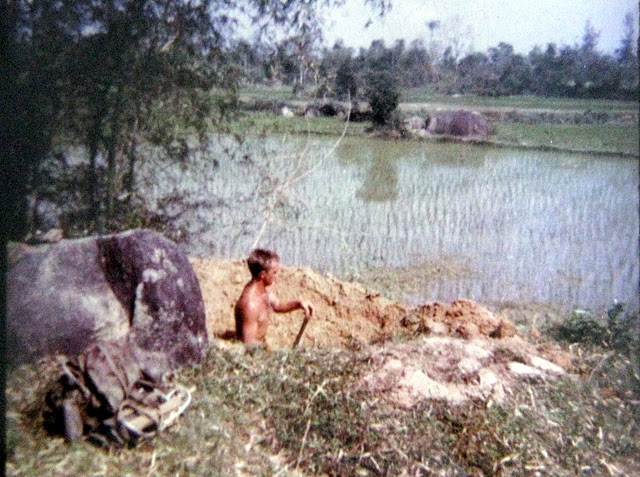 Surber prepares his foxhole home overlooking a rice paddy in the highlands of Vietnam. Photo provided

“Most of the time we didn’t do night maneuvers. But this one night we were going through an old grave yard that the NVA booby-trapped. We had already lost two fellows who had their legs blown off,” he said. “A third guy tripped a booby-trap. We sandbagged his leg and tried to yank it out of the sandbagged hole before the device exploded. Lucky for him it was a dud.”

Surber was in Hue, the old capital of South Vietnam, about the time the Tet Offensive began. This was the big fight that caused President Lyndon Johnson to throw in the towel on the Southeast Asian war.

The young soldier flew home to the States and an unexpected confrontation with anti-war activists. They met him at the airport in Seattle, Wash.

“I came in on a Pan Am flight from Cam Ranh Bay in my newly issued Army uniform. When we first saw Seattle the biggest thing were all the lights. We hadn’t seen a city lit up like that in a year,” he said.

“The anti-war people were waiting for us when we got off the plane. About 30 of them were there and some held signs saying we were ‘BABY KILLERS.’ They spit on us as we walked into the terminal. We had no idea what had been going on with the anti-war activists in the U.S. while we were fighting in Vietnam.

“The worst thing about going to Vietnam was trying to get the Vietnam smell off when you got home,” Surber said. “I couldn’t get clean. I smelled like jungle rot.”

There was plenty of work available in the late 60s in the U.S. He got a job working at the Rock Island Oil Refinery in Indianapolis, Ind. It was a small, privately owned operation he worked for, for the next 24 years. After getting out of the refinery business Surber went to work for Ellie Lillie Pharmaceutical where he spent another 18 years.

He and his former wife had two children: Nikki and Dede. They also adopted a Vietnamese girl named Kari. After retiring from Eli Lilly, Surber moved to PGI in 2009. He lives in the Palacio Del Sol condominiums overlooking Charlotte Harbor.

This story was first published in the Charlotte Sun newspaper, Port Charlotte, Florida on Monday, April 4, 2011 and is republished with permission.