Spc. 4 Dale Tauer, a member of the 101st Airborne, holds an M-79 grenade launcher as he sits atop a hill in Vietnam. It was just before "The Battle of Ripcord," one of the largest battles of the war, that soured the American public on Vietnam. Photo provided

Dale Tauer of Punta Gorda, Fla. was a member of the 1st. Battalion, 506th Regiment, 101st Airborne Division–The Screaming Eagles. In July 1970 he fought on a hill top in The Battle of Ripcord, the last major battle involving Americans in Vietnam’s A-Shau Valley against the 324th Division of the North Vietnamese Army.

He had no intention in 1969 of joining the Army and certainly not the Airborne. Just out of high school his situation was all a big mistake, as far as Tauer was concerned.

The teenage recruit had only gone down to Minneapolis to sign up for the draft after graduation from high school earlier in the year. He missed the bus and was rescheduled.

“They said I had options. I could join the Army, Navy, Air Force or Marines. I told ’em I wanted to get out of there, I didn’t want to go to Vietnam I wanted to go to Canada,” Tauer recalled 40 years later. “They said that was the wrong thing to say because I was already in the Army and was leaving on a plane that night. I called my parents from a pay phone and told them I was gone.”

He took basic at Fort Bragg, N.C., went to jump school with the 101st Airborne and became a member of the Vietnam version of the fabled “Band of Brothers” 506th Regimen from World War II. Tauer jumped only once in basic. From basic he went to Fort Lewis, Wash. and spent three weeks as a clerk typist until an officer needed an extra soldier to fill a seat on an airplane headed for Vietnam. He was that person.

Tauer is pictured somewhere in Vietnam in 1969. He served with the 506th Regiment of the 101st Airborne--"The Band of Brothers" Vietnam version. Photo provided.

There four-engine jet refueled in Alaska and started to takeoff.

“The plane hit some ice on the runway, ran through the barricade at the end and crashed. We jumped on the slide and got out okay, but spent Christmas weekend in the terminal,” he said. “I ended up in Hawaii without orders. From there it was on to Japan and eventually Cam Ranh Bay, Vietnam.

“Because I had no orders I was given a job fixing boat motors at the officers’ club there. I was surfing, pulling people around on water skis and mixing drinks for the officers. I was a cabana boy, it was great,” he said. “I was having a drink with this officer when he found out I had some radio training. He told me he was going back to Da Nang and he could use a radioman.

“The next thing I know I get stuck being a radioman for this major’s outfit. I ended up at Quang Tri. I had no idea what was happening. Another kid and I were sent out to the fire base. The other guy happened to be a ham radio operator and really liked my radio. I gave it to him and told him I’d take his job, but he didn’t know what it was.

“On my first day of battle I was really scared. I was told we had just lost our point man and ‘Red’ was moved into that spot. I became his slack man (his understudy). A week later ‘Red’ was killed by a sniper’s bullet and so was the kid I gave my radio to,” Tauer said. “I became the next point man for our squad.

“Later, while up at Camp Evans, near Hue by he DMZ, I got involved in The Battle of Ripcord, one of the last big battles of the Vietnam War,” he said. “It was the only battle the 101st Airborne ever lost.

“About 50 of us from our company were dropped into the war zone to find out where all the NVA mortar and artillery fire was coming from. We learned later 1,500 US troops were up against 15,000 NVA regulars. 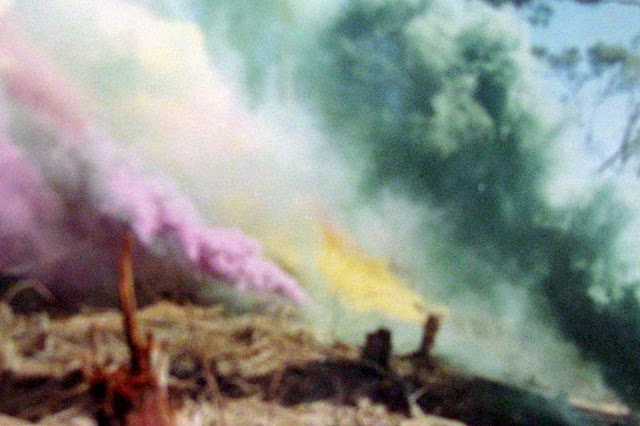 Colored smoke marks the spot where a couple of North Vietnam Army snipers were hiding. The 101st Airborne called in an air strike to take them out. Photo provided

“The fighting went on for what seemed like hours but really didn’t. Everywhere you looked there were NVA. John Knot, my Minnesota buddy, decided to rush the enemy down the hill.

“When John showed up in our outfit I got the responsibility of keeping an eye on him because we were both from Minnesota. He was a real quiet 18-year-old kid who was scared to death. I kept telling him, ‘You’re gonna be okay.’

“I jumped out of the hole I was in, ran down the hill after John. I grabbed him by the arm and tried to pull him back toward the fire base,” Tauer said. “Fifty-feet from where we were the NVA had a row of four mortar tubes they were popping rounds into. The NVA were all in uniform.

“One NVA soldier was out in front of the mortar-men. He was holding an RPG (Rocket Propelled Grenade) he pointed toward us. I remember the flash from the RPG. A second later it hit John and splattered him all over.

“The blast blew me backwards and broke both my ear drums. There was a lot of ringing in my ears and I could see a bright light. I kinda felt relaxed. I didn’t feel a lot of pain. I was pretty sure I was dead,” he said.

“I don’t know what the time sequence was after that because I was knocked out for a while. There was a lot of action going on around us and trees were falling,” Tauer said. “I was wearing an ammo vest with 40 rounds in little pockets. The NVA came up rolled me over and took my vest and grenades. They must have thought I was dead.”

The next thing he knew he was medi-vacced off the hill in a chopper.

“As we’re pulling off the LZ (Landing Zone) the NVA hit the helicopter with machine-gun fire that got our door gunner. I was laying on the floor and bullets came through the floor between my arm and body and never hit me,” Tauer said.

“We were flown back to a field clinic at Camp Evans. I remember laying on an operating table and there was total chaos around me,” he said. “A nurse came up and said to someone, ‘He’s not bleeding out.’ So they pushed me to the back of the wounded.”

Tauer received treatment and was moved to a hospital ship and later to a recovery center at Da Nang and from there to Fort Lewis, Wash. After he was fully recovered he still had a year or more to serve. He was discharged from he Army in September 1971.

He returned home to Minnesota to his dad’s farm until he got a job breeding cattle.

“It was hard work, but I loved it because I didn’t have to deal with a lot of people. I didn’t want to talk to people. I couldn’t sleep at night,” Tauer said. “I got into farming and pretty soon I was raising one million chickens and 1/2 million turkeys for Hormel Food. Then I started raising a 1/2 million pigs for them under contract.”

He sold out and he and his wife, Janice, moved to Punta Gorda in 2005. They have three children: Sherry, Matthew and Jeff and seven grandchildren who spend Christmas with their grandparents.

Looking back on Vietnam, Tauer said, “It was a terrible waste of lives. We lost 50 guys from my unit on that hill during The Battle of Ripcord. This was the battle that turned people in America against the Vietnam War. I think it’s important for people to understand war is a terrible thing.”

This story was first printed in the Charlotte Sun newspaper, Port Charlotte, Florida on Monday, Feb. 21, 2011 and is republished with permission.