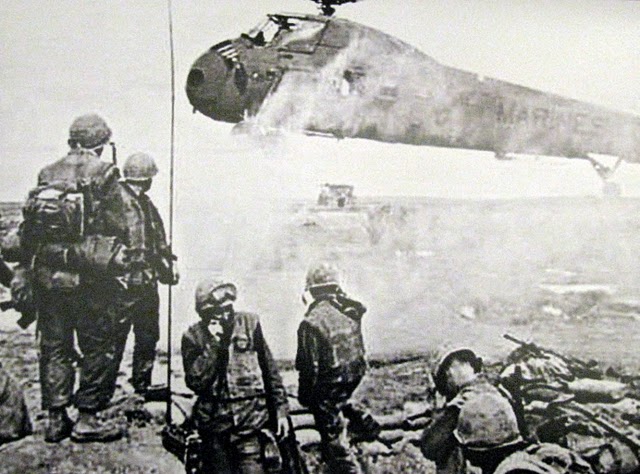 John Thomas Murphy was a Marine pilot who flew helicopters and observation planes in Vietnam during his two combat tours. He received a Distinguished Flying Cross on each deployment while piloting an H-34 helicopter and   a OV-10 Bronco twin-engine spotter plane into withering North Vietnam Army fire.

March 28, 1966 is a date that will remain in the 69-year-old Punta Gorda, Fla. Leatherneck’s memory for as long has he lives.

“Initially I was flying with Marine Helicopter Squadron 161 that arrived in country aboard the aircraft carrier Iwo Jima. We made the initial assault on Chu Li, south of Da Nang,” he recalled.

It was during the middle of Murphy’s first tour he received his first DFC. He switched to Marine Helicopter Squadron HMM-363, flying from a mainland base after the Iwo Jima took an R and R cruse out of the area.

“Charley Company, 1st Battalion, 7th Marine  Regiment ran into a battalion of NVA regulars near Chu Li. The Marine company was in serious trouble. It had taken a number of casualties and needed a Medevac helicopter. We were sent in their place.”

The storied Marine company that was taking a beating from the NVA that evening was known as “Suicide Charley.” It was a moniker the unit received in World War II while distinguishing itself early in the war on Guadalcanal .

“That night, just about dusk, I flew in to take out the wounded Marines in my H-34. We were making an approach and got about half way drown but the enemy fire was extreme,” Murphy said. “I thought to myself, ‘If I keep this up I’m gonna get blown out of the sky!’ 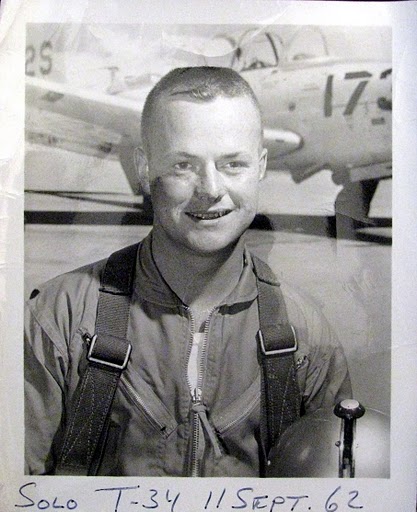 This was Murphy just after he soloed while attending Navy Flight School in Pensacola, Fla. in 1962. He was in his 20s. Photo provided

“My wing man pointed out a small ridge line in front of us. ‘If we come in under that ridge line we’ll be shielded from a lot of the enemy fire,’ he said.

“As we were coming into land my co-pilot, who was brand new in country, was trying to shield his face from enemy bullets with his arms. At the time I thought that was kinda bizarre because your arms wouldn’t protect you from enemy fire.” Murphy said 45 years later.

“I also remember our gunner, on the port side in the back of our helicopter was new in country. He wasn’t returning fire on the enemy with his door-mounted M-60 machine-gun. I yelled at him over the radio, ‘SHOOT DAMN IT! SHOOT!'”

“As we landed to pick up the wounded we were still taking a lot of enemy fire. The pilot of an H-3 helicopter, like the one I was piloting, sits 13 feet up in the air off the ground. ‘He makes a good target,’ that’s what I was thinking at the time.

“Enemy mortar rounds started landing in our zone. I remember sitting there with my feet on the rudder pedals and both feet were shaking and I couldn’t control them,” he said. “I told our crew chief, ‘We need to get out of here.’ 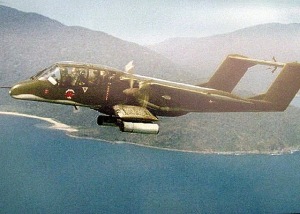 A North American OV-10 Bronco that the Marine Corps used as an attack and observation plane is pictured. Murphy piloted one of these light aircraft during his second tour in Vietnam. Photo provided

“I started pulling power on the helicopter as it began to lift. At that moment a young Marine, in bad shape, was being helped toward our helicopter by two Marines,” Murphy said. “He looked up at me and I looked at him and I thought to myself, ‘I’m not going anywhere til he’s on board.’ I set the copter down, they put him on and we lifted off.

“By this time it was completely dark. We could see a stream of enemy fire coming our way. My new port side gunner was blazing away at the enemy with his M-60 machine-gun,” Murphy said. “Those H-34 helicopters could take a lot of beating and keep going. We took a lot that day.

“We flew the half-dozen wounded Marines to a Navy MASH-like hospital 30 minutes away from the battlefield. I don’t know if the young Marine who, was put aboard at the last, minute made it or not,” he said.

Murphy had an interesting experience a couple of years ago that relates to his helicopter rescue near Chu Li. He was attending a Marine helicopter pilots’ reunion in Pensacola and ran into several members of “Suicide Charleys” who were also having a reunion at the same time.

They started comparing notes. Murphy realized he had flown a couple of them out of harm’s way to a MASH unit so long ago. They agreed on the date: March 28, 1966.

Murphy is shown beside the helicopter he flew in Pensacola, Fla. while serving as an instructor. Photo provided

After his first tour in Vietnam he returned to Pensacola and became a T-28 fixed wing aircraft instructor until North American Rockwell produced the OV-10 twin-turbo prop light attack and observation plane.

“They were looking for a pilot who had helicopter and fixed wing experience. I was one of those people,” Murphy said. “On my second tour I ended up flying in Marine Observation Squadron 2 out of an air base at Marble Mountain near Da Nang.

‘We flew visual reconnaissance missions. When we spotted the enemy we would mark their position with a white phosphorous rocket and call in artillery on an air strike. We could also provide a ground unit with direct support with our fire power. We carried machine guns and rockets,” he explained.

It was on one of those missions Murphy received his second DFC. With his OV-10 he was flying “shotgun” for a Medivac chopper picking up wounded Marines.

“If they didn’t have a gun ship protecting them they were on their own. The Medivac guy was taking all kinds of enemy fire. I could see where the enemy fire was coming from and I opened up on the NVA with my machine-guns and rockets.

“They finally landed their helicopter and got the wounded out. The next thing I knew I got this note they were putting me in for a second DFC,” Murphy said.

When he came back from his second tour in Vietnam he had nine years in the Corps. He was thinking about making the service a career until he learned he might be flying a desk during his last decade of service in the military.

“I didn’t want to do that so I got out. I returned home to a little town outside Toledo, Ohio, and joined the Air National Guard. I spent almost 20 years in the Guard flying F-100 fighters and A-7 bombers. I retired in 1989 a lieutenant colonel and commander of a squadron in the 180 Tactical Fighter Group based in Toledo.”

When not flying for the Marine Corps, Murphy was the owner of a Ben Franklin store in a little town near Toledo. He and his wife, Sally, moved to Florida in 1997. They have three children:  John, Shannon and Carmell.

Looking back on his service in the Marine Corps he observed, “I have mixed emotions about Vietnam. To me it was a war we won over there, but it was lost over here by politicians in Washington.”

This story was first printed in the Charlotte Sun newspaper, Port Charlotte, Florida on Thursday, January 27, 2011.  It is republished with permission.