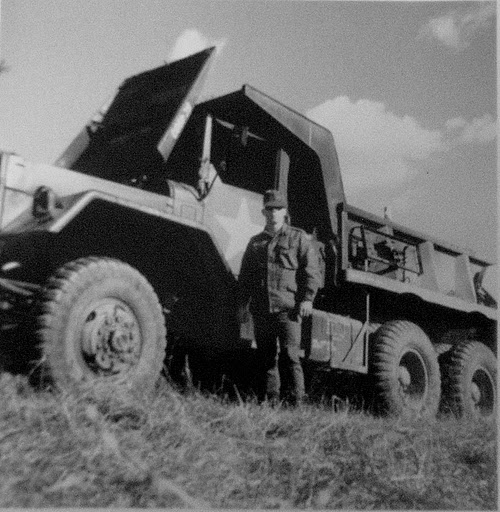 Spec-5 Jim Broom and his five-ton dump truck is pictured some where in Vietnam. He was a member of the 815th Engineering Battalion over there and spent 11 months driving this truck throughout the Central Highlands combat zone. Photo provided

Jim Broom of Edgewater Manor, Port Charlotte, Fla. was no war hero. He was just a Specialist-5th class who drove a five-ton dump truck and got shot at by the enemy in Vietnam in 1967-68 while serving with the 815th Engineer Battalion for 11 months and 15 days.

“After arriving in Vietnam and three days of orientation at Cam Rahn Bay we were sent to our specific assignments. I was trucked to Pleiku, in the Central Highlands,”  Broom said. “We arrived in the middle of the night. We were tried and hungry. Myself and my sergeant went looking for the company commander and woke him up.

“The sergeant told the captain, ‘I’ve got troops that need to be fed and need a place to sleep.’

“That captain came unglued on that sergeant. He yelled, ‘Sergeant this is a war zone. Get your butt out of here. Go find a place to lie down and for God’s sake don’t light a cigarette. If you do it will be the last one you ever light because a sniper will shoot you,'” he recalled more than four decades later.

This picture of Pvt. Jim Broom of Port Charlotte, Fla. was taken when he was in Army boot camp at Fort Lewis, Wash. He spent a year there before his tour in Vietnam in 1967-68. Photo provided

“The captain did tell the sergeant, ‘There’s a dim light over there and a pot coffee. Stay there till daylight. Now get out!’ I don’t know what the sergeant did, but I headed for the coffee,” Broom said.

“I was 21 and scared to death. I didn’t know anyone and this was my first night on the front line. In my pressed fatigues and shined boots I looked like the Army’s poster boy until I fell into a ditch filled with mud walking toward the coffee pot,” he said. “When I came up out of the ditch I was mud from one end to the other. I laid there on the ground crying.

“War is hell I remember thinking. But I never cried again in Vietnam,” Broom said.

“Next morning when the soldiers got up to go to breakfast they were filthy. I thought to myself, ‘Oh my god, I’m gonna have to live like this?’

“I moved into a 12-man tent with a bunch of people I didn’t know from West Virginia,” he said. “When I walked in and dropped my sleeping bag they were playing  Hillbilly Music. I said to nobody in particular, ‘I hope I don’t have to listen to that hillbilly stuff all the time.’

“Next thing I knew seven guys were standing around me. They let me knew it wasn’t Hillbilly Music, it was Country and Western and I was gonna have to listen to it. I was learning fast.”

Most of the time during his tour in Vietnam, Spec-5 Broom drove a dump truck filled with  sand or ammo and supplies from Pleiku to Kontum or Dak To and back again, a distance of 60 miles, sometime twice a day. His five-ton truck was either providing road-building sand or supplying the 173rd Airborne based at Dak To. 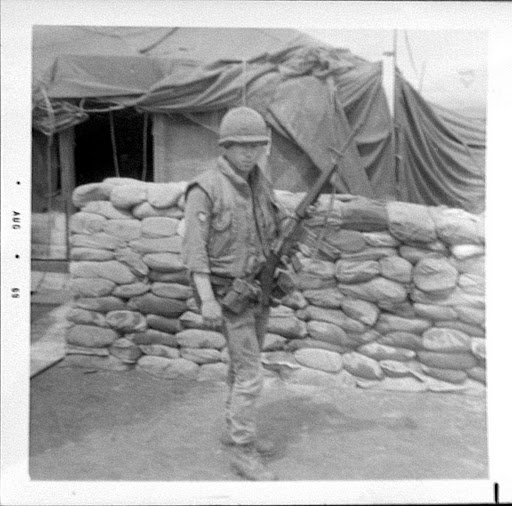 Broom with his M-16 rifle, flak jacket and steel pot is ready for battle. Photo provided

They only traveled in convoy from town-to-town and only during the daytime. An Abraham tank would lead the convoy of up to 70 trucks through the Central Highlands. Every other truck had a gunner with an M-60 machine gun mounted on top of the cab.

Despite their firepower they were frequently attacked by North Vietnamese Army units and Vietcong guerrillas.

“On my first convoy from Pleiku to Kontum our lieutenant told us, ‘Three to four miles down the road we’re going to get shot at by a VC. I don’t want you to kill this guy. He’s being paid by the NVA, (North Vietnamese Army), to shoot at us but he hasn’t hit anybody. We don’t want to take him out because they might replace him with someone who is a good shot,” Broom said.

“Sure enough we drove by him in a tree. All at once: Boom! Boom! Boom! The convoy didn’t stop it just kept on going. Normally we would have pulled over and returned fire.”

Six months later, on a run to supply the 173rd with more ammunition and food, his convoy came under intense fire from VC hidden in the bushes.

“All of a sudden we got ambushed. All the drivers pulled their trucks off the road and hid in a drainage ditch as they fought it out with the VC,” he said. “When the shooting quit a VC woman walked out of the jungle with one arm hanging down where she had been shot. She claimed she was just out in the field working when we shot her. That was a lot of bull. She was definitely VC.

“I took her to my lieutenant and he saw that she was treated at a hospital. I heard later she tried to sue the government for killing her water buffalo. I don’t know what happened to her,” Broom said.

Their big luxury during his tour in ‘Nam was a shower. When he first arrived at Pleiku they had a makeshift arrangement. A 55 gallon drum was mounted on the top of a stall and holes were punched in he bottom. If you wanted a shower you climbed up the ladder with a buck full of water, dumped it in the drum then ran back down and got under the water coming out the bottom of the barrel. It wasn’t very satisfactory.

This is what the 815th had as their shower before they built a much improved replacement. It was a bucket a shower type arrangement to start with that wasn’t very satisfactory. Photo provided

“Our main project over there was getting a real shower built. When finished we had four or five stations where you could take a shower. Water was supplied by a water truck that filled a tank,” he explained.

“We told the Vietnamese who worked on our base, some of whom were VC, ‘If one of your mortars hits our shower we’re going to kill everyone of you.’ Even during the Tet Offensive, when we got mortared 12 days in a row, none of the VC mortar shells fell anywhere close to our shower.”

During his last two weeks over there Broom was bragging about being a “Short-timer.” His comments angered the company commander and new lieutenant who both had nine more months of service in Vietnam. As a consequence he was ordered to make a perilous journey through a mountain pass to rendezvous with Gen. Omar Bradley Jr.

“When you’ve got less than 30 days left you’re not sent out on assignments like that. You’re suppose to say on base out of harms way,” he said. “I was sent with a jeep and a driver. The Jeep had a M-60 machine gun mounted on it.

“We were going to be traveling through a valley where 10,000 Frenchmen were killed fighting the VC in the 1950s. We made it there without incident about the time Bradley set down in his helicopter.

“He was suppose to check out the pass. When he surveyed the situation from afar he got back in his helicopter and flew off. But we had to go back the way we came and I’m thinking, ‘I’m gonna get killed because of this guy who gets out of his helicopter, takes one look and flies away.’

“We took off for the base through the pass once more. I’m blazing away with my M-60 shooting at anything and throwing hand grenades as we went. We made it back in one piece. I don’t know what Bradley ever did,” Broom said.

The young truck driver went to work at General Motors after serving two years in the service. He spent the next 30 years assembling engines at GM. In 2004 he retired to Port Charlotte. His 40-year-old son, Matt Broom, lives in Brandon.

This story was first printed in the Charlotte Sun newspaper, Port Charlotte, Fla. on Monday, Jan. 3, 2011 and is republished with permission.