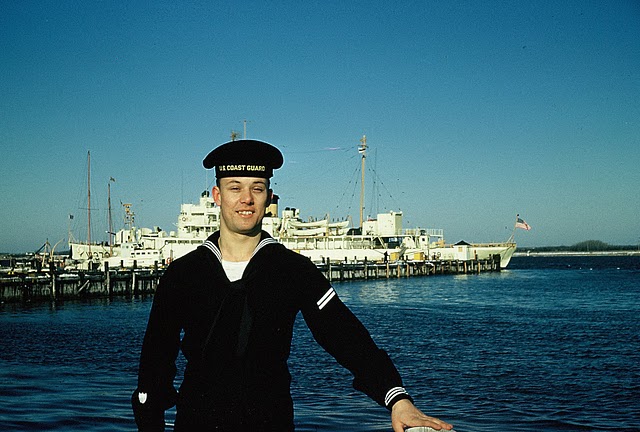 Charlie Parsons of Emerald Lake in Punta Gorda, Fla. is pictured standing in front of the Coast Guard Cutter Yakutat in Cape May, N.J. He served aboard her in 1957 after graduating from the U.S. Navy fleet sonar school in Key West, Fla.. Photo provided

By the time Charlie Parsons joined the Coast Guard in 1956 he had already served two years in the Marine Corps Reserve, starting in 1953 while still in high school in Saugus, Mass.

“I loved the sea and I was a boating enthusiast,” the 74-year-old Punta Gorda man, who lives in Emerald Lake Retirement Community, explained. “I qualified for all the schools the Coast Guard had. I ended up in the U.S. Navy fleet sonar  school in Key West where I spent six months learning how to be a sonar man.

“We chased American submarines in the Gulf during the morning and spent the afternoon in electronics class. It was pretty nifty down there because I also joined the Navy band and played trumpet in their dance band. Every weekend we picked up our passes and headed for Miami,” he said.

Parsons’ family lived along the North Shore of Boston. He lucked out and got assigned to the Coast Guard Cutter Yakutat out of New Bedford, Mass. that was going on the next summer cruise with another cutter accompanying “The Eagle,” the sailing vessel for Coast Guard Academy cadets.

“It was on my first trip to the North Atlantic when we were crossing the Gulf of Maine I got sea sick my first and only time. The petty officer in charge told me,’ If you get sick you’re staying right at your radar and we’ll hang a can around your neck to puke in.’ Funny thing, before the night was over this old salty dog was sick like the rest of us,” Parsons chuckled.

“Our station at sea was a 210 square mile area. Aboard our cutter was a radio beacon which transmitted our signal to planes flying overhead and ships at sea so they could determine their position and speed,” he said. “For 21 days at a time we were in the North Atlantic on station.

“On Ocean Station Bravo in the North Atlantic with 60 foot swells it could get rough. You had to strap yourself into your bunk or you’d come flying out and hit the deck,” Parsons explained. “One night I was in my bunk and the scupper on the outside of the ship came lose. A stream of water, like a fire hose, went right past my face. We had to get the guys in damage control to plug it until we made port.

It was 1958, the Eagle hoisted anchor in May and headed for Europe and a five-month cruise to many historic places. She wouldn’t return to her home port of New London, Conn. until September.

“You couldn’t buy a trip like that,” Parsons’ said. “It was tremendous.”

They left Baltimore Harbor in the Yakutat and sailed for England and Scotland shadowing the Eagle with another cutter crossing the Atlantic without incident.

“Our first port of call was Amsterdam, Holland. We went up around the Shetland Island, past the White Cliffs of Dover, into the Keel Canal and on to Amsterdam where the Eagle tied up for a week to show the flag and give the public a chance to come aboard as see a tall ship up close,” he said.

“Two buddies and I rented a VW for a week and toured Europe. We visited the Peace Palace at the Hague, attended the 1958 World’s Fair in Brussels, Belgium, went on to Colon, Germany, saw the U.S. War Memorial at Bastogne where the Battle of the Bulge was fought in World War II, then to Dusseldorf, German and finally we returned to our cutter and the Eagle in Amsterdam,” Parsons recalled. “It was an incredible trip for a 21-year-old and a couple of buddies. 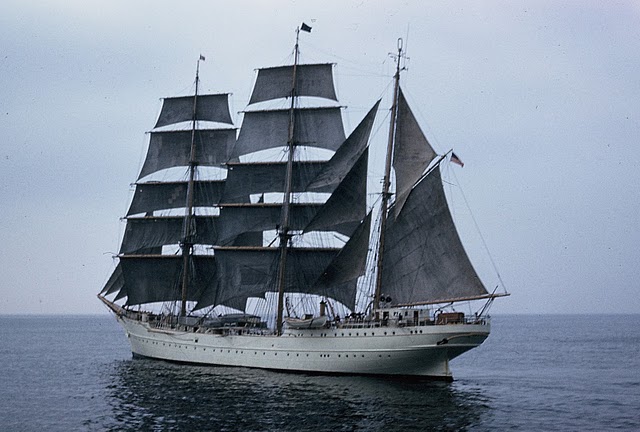 The Coast Guard Cutter Eagle was acquired from Nazi Germany after World War II part of the Gertman's war debt. It was recommissioned as a training vessel and sailed by the U.S. Coast Guard Academy cadets. Parsons accompanied the training vessel on a summer cruise to Europe in 1958 while sailing aboard the Cutter Yakutat. Photo provided

“Since we were in our Coast Guard uniforms the whole time we were asked a lot of questions by civilians who wanted to know about America, about the service and us,” he said. “So many of the people we met were still extremely grateful for the sacrifices U.S. servicemen and women made for them during World War II. This was only 13 years after the end of the Second World War.”

Their next port of call was Dublin, Ireland.

“There were 100,000 people on the docks in Dublin waiting for the Eagle to arrive. All the sailors on the Eagle and the two accompanying Coast Guard cutters were invited to Irish families’ homes,” Parsons said. “We spent a week there and became tourists once more seeing the sights and sampling their brew.

“I went to ‘Lord Nelson’s Pillar,’ along downtown O’Connell Street in Dublin and took some pictures,” he said. “It wasn’t too many years after that, that the Irish Republic Army blew it up.

“We pulled under the statue of Christ in the harbor at Lisbon, Portugal. From there it was back across the Atlantic to Bermuda and on to take in ‘Canadian Navy Day’ at Halifax, Nova Scotia as a representative of the U.S. Government. We then sailed up the St. Lawrence River to Quebec and Montreal with our tall ship on display.”

Parsons completed his summer cruise accompanying the Eagle back to its home port at New London, Conn. where the Coast Guard Academy is located.

Immediately after he returned to New Bedford the Yakutat was assigned to oversee the America’s Cup Race off Newport, R.I. In 1958 Columbia, sailing for the U.S, gave the English challenger, Scepter, a 12-second drubbing. Parsons’ and his cutter were on the front line watching the yachts sail by as they kept order among the civilian sailors who came as close as possible to the competing sailboats.

“I handled the radar and plotting aboard the cutter. By this time I was 22 and a 1st Class Petty Officer,” he said.

After returning to New Bedford, Mass. aboard the Yakutat, Parsons requested a transfer to the Cutter Bibb stationed in Boston where his parents lived. He had hardly come aboard when she left for Guantanamo Bay Cuba and war games. He had just returned from down there doing the same thing aboard the Yakutat.

“The US Coast Guard Cutter Bibb broke the record for anti-submarine warfare activities while on deployment. We swept the Navy. A picture of our ship was on the front page of The Navy Times.

His four years in the Coast Guard was almost up and his commander wanted him to stay in and go to OCS and become a Commissioned Officer in the regular Coast Guard. His wife, was not in favor of the plan so Parsons decided to get out of the service.

“I had no complaints about anything I did in the United States Coast Guard. We were ‘Shallow Water Sailors,’ but we rarely saw the shore,” Parsons said with a smile.

He completed college and went to work in marketing and sales for a Fortune-500 Company. He and his wife, Beverly, moved to Emerald Lake two years ago after he retired.

The Cutter Yakutat was given to the South Vietnamese Navy. It ran the ship aground in the Mekong Delta. The ship was overrun with Vietnamese civilians and chickens.

The Cutter Bibb was decommissioned and sunk in the Gulf of Mexico off the coast of Florida for an artificial fishing reef.

This story was first published in the Charlotte Sun newspaper, Port Charlotte, Florida on Monday, July 19, 2010 and is republished with permission.