This was Pvt. Charlie Householder after he graduated from Jump School at Fort Benning, Ga. in 1953. He had just graduated from high school and was 18 years old. Photo provided

Charlie Householder served in Vietnam in 1969 as a Platoon Sergeant. with the 82nd Airborne Division at first and end up in the 25th Infantry Division in ‘Nam. He retired a decade later as a 1st Sergeant with the 82nd at Fort Bragg, N.C.

“I’m proud of my service to my country and I’m especially proud of being an Airborne Paratrooper,” the 75-year-old Port Charlotte resident said. “I made my first jump from a C-119 “Flying Boxcar” when I graduated from jump school at Fort Benning, Ga. in 1953 when I was 18 years old.

“I went in the Paratroopers because of the extra jump pay. In those days an Army private received $78 per month pay. If you went Airborne you got an additional $50 per month in jump pay,” he explained. 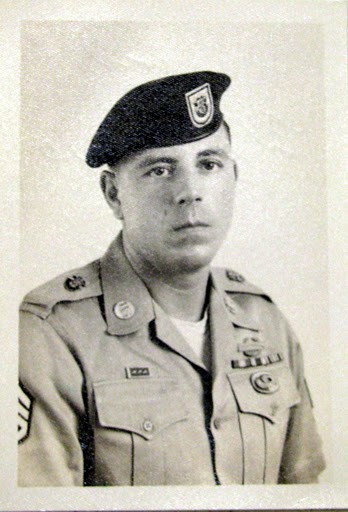 Staff  Sgt. Charlie Householder is pictured about the time he served as a platoon sergeant with the 82nd Airborne and 25th Infantry Division in Vietnam in 1969. Photo provided

While in the service Householder lucked out on two scores. He joined the Army five months after the end of the Korean War, in December 1953. Secondly, he made 21 parachute jumps during the more than quarter-century he served in the Airborne, but he never made a combat jump.

His first combat assignment overseas with the 82nd was during the attempted Communist overthrow of the Dominican Republic in the 1960s.

“The 82nd was sent as a division over there. We went with the Marines as part of Organization of American States troops who went to the Dominican Republic to oppose the rebels,” he said. “Although the division stayed their for a year, after six months I went back to Fort Bragg and was assigned to the 1st Special Forces on Okinawa, Japan.”

He became a light weapons specialist on a Special Forces A-Team in Okinawa. He went for cold weather training in northern Japan. After that Household spent time in Jungle Warfare Training about the same time with Special Forces.

“They were expecting the enemy to pull a Tet-like offensive when I was sent over to Vietnam in 1969 as a sergeant in the 4th Brigade of the 82nd Airborne,” he said. “The NVA (North Vietnam Army) offensive didn’t happen right then. So our brigade spent most of its time protecting roads and bridges in Vietnam.

“I got reassigned to the 25th Infantry Division that was fighting in the Iron Triangle. This was the part of Vietnam in the middle of the country that was hotly contested by the NVA and VC (Vietcong),” Householder said.

His company called themselves, “The Walking Raiders.” 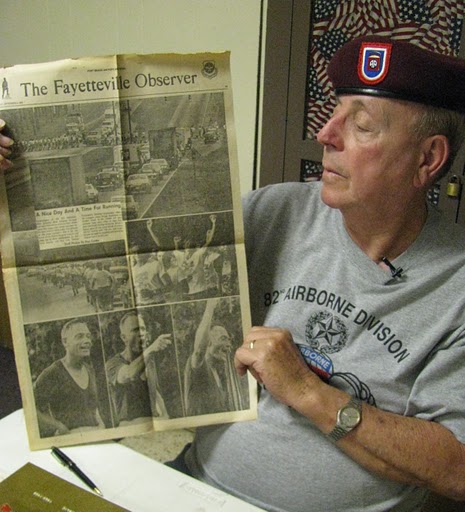 “With the 25th we did C and As—Combat Assaults. I was a platoon sergeant much of the time over there and I’d take my platoon out on overnight ambushes. We’d go out looking for the North Vietnamese,” Householder explained.

“One time we were in the Iron Triangle that hadn’t been worked by our troops in over a year when we ran into the NVA. We lost several of the men on my patrol KIA (Killed In Action),” he said. “Others were lost to booby traps the NVA set for us. They particularly like using ‘Bouncing Betties’ that came up off the ground a foot or two and explode when their trip wire was tripped.”

By the time the firefight was over the enemy had lost some soldiers, too. The encounter was just one of many inconclusive engagements Householder and his platoon were involved in during the year or so he spent in Vietnam.

Bravo Company, 2nd Battalion, 22nd Regiment, 25th Infantry Division had its biggest engagement with the enemy while he was over there when they attacked their base in strength.

“They attacked us with sappers one night and it was really bad. The enemy had grenade launchers and satchel charges and tried to break through our barbed wire enclosure,” he said. “They never got through, we stopped them. However, they did punch some big holes in a couple of the Quonset huts during the attack.”

Shortly after returning from Vietnam, Householder made 1st sergeant and went back to the 82nd Airborne stationed in Fort Bragg, N.C. He retired from there 10 years later and he had his wife, Joan, moved to Port Charlotte in 1980 where they have lived ever since.

This story was first published in the Charlotte Sun newspaper, Port Charlotte, Florida on Thursday, October 7, 2010 and is republished with permission.

He served with the 11th Airborne Division, Fort Bragg, North Carolina,
Dominican Republic and Special Forces, 25th Infantry division in Viet Nam. Charles
retired December 1,1980 as First Sergeant or E-8. He worked for Charlotte County
School Board 16 ½ years, retiring in September 1999. Charles was a life member of the
VFW Post 56 and American Legion Post 103. He was past, All State Commander VFW,
All State District 10, VFW. and Cootie of the year. Charles was an Umpire for 3 years,
coach and manager of the Babe Ruth Baseball for 4 years and Charlotte County Little
league chief.

In Lieu of flowers memorial donations may be made to Hospice of Southwest,
Florida, 5955 Rand Blvd. Sarasota Florida 34238-5188.