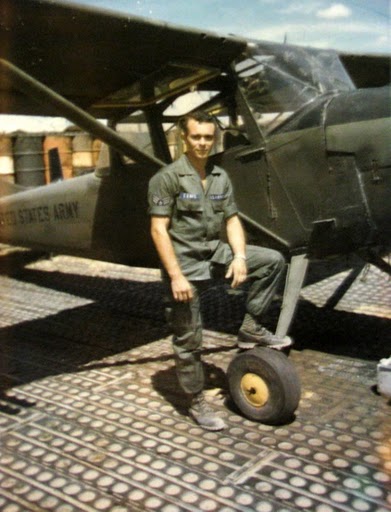 Rene Camps is pictured with an Army version of a “0-1 Bird Dog” spotter plane he maintained as an aviation mechanic during the Vietnam War. Photo provided

Rene Camps was an aircraft mechanic who kept a Cessna 0-1 Bird Dog forward air control spotter plane in the air during the Vietnam War. He graduated from high school in Miami in 1964 and served two tours in ‘Nam as a member of the 21st Tactical Air Support Squadron from 1967 to ’69.

“I was assigned to a single airplane and worked with three pilots while I was over there. They flew recon missions looking for signs of enemy troops or supplies,” the 65-year-old former Air Force staff sergeant from Port Charlotte, Fla. said. “If they found enemy movement during a recon flight they would fire a white phosphorous rocket to mark the spot. Then they would establish if there were friendlies in the area and if not they called for an air strike.”

During the two years Camps served in Vietnam his unit supported the 1st Cavalry Division, the 173rd Airborne Division and the Korean White Horse Division. They went wherever they were needed throughout the country.

“I spent a lot of time around an Army MacV compound at Tuy Hoa, along the coast of Vietnam. I was there during the ‘Tet Offensive’ when a bunch of NVA (North Vietnamese Army) troops tried to over run our compound by attacking us along the beach,” he said. “We called in a ‘Spook,’ a C-47 with mini-guns. My position in the compound was on an M-60 machine-gun. We stopped them with the ‘Spook’s’ help. The body count was about 100 dead NVA.” 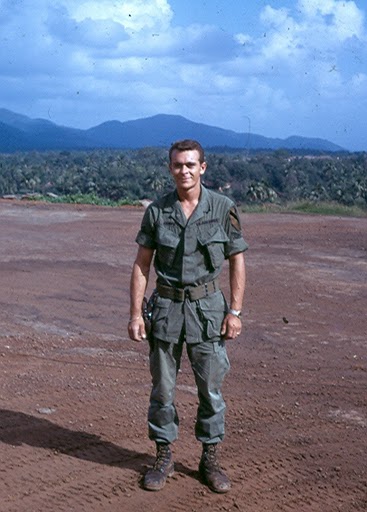 Rene Camps somewhere in Vietnam during one of his two tours over there. Photo provided

Most mornings Camps’ would drive his ‘Bird Dog’ pilot to the nearby join Air Force-Army command center and air strip in his Jeep. His man would fly out in the single engine Cessna and spend three hours crisscrossing a pre-designated area looking for signs of the enemy.

When he returned from a mission Camps would check his plane for damage and to make sure the engine and other parts of the Cessna were working properly. He’d gas up the airplane for the next flight and take his flying companion back to the base in his Jeep.

“Quite a few ‘Bird Dog’ pilots were shot down in Vietnam. But none of my pilots went down,” he said.

Even before ‘Tet’ the NVA and the Vietcong were harassing the Americans at Tuy Hoa.

“Our based was protected by 55 gallon drums full of sand around the perimeter, but that didn’t stop the rockets the VC shot at us. Although we couldn’t see them in the beginning they were lobbing rockets into the base,” Camps recalled. “Myself and nine Army guys were firing at a tree line with our M-16 (rifles) and my M-60 because we couldn’t see anything. Then off in the distance we saw four VC walking toward an abandon concrete bunker between us and them. They got in the bunker about 200 yards away and continued shooting.

“I ended up separating from the Army guys and going around the end of the bunker where the VC were hiding and chucked two hand grenades into the bunker. The grenades killed three of them and badly wounded the fourth enemy soldier,” he said.

For his efforts Camps received a Bronze Star medal with “V” for valor and a Vietnam Cross of Gallantry.

Because his workday with Vietnam was short he would improvise things to do. 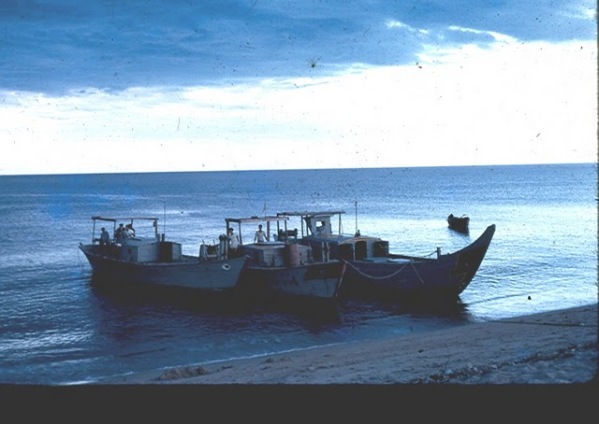 This is the junk he sailed on during his off time looking for Vietcong in the bush. Photo provided

“Sometimes I’d go on patrols in a wood junk with the South Vietnamese Navy. They would spend a few hours each day looking for infiltrators along the coast and rivers on their search and destroy missions,” he said. “Their 30-foot junk had a .50 caliber machine-gun amidships. With my flack jacket, steel pot and M-16 I’d go to war. 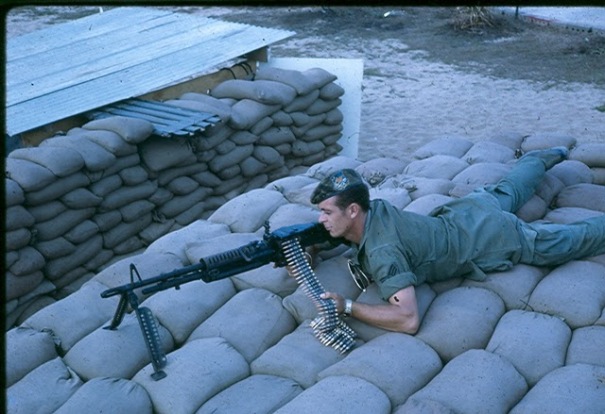 Rene Camps is pictured with his M-60 machine-gun. He used the gun to hold off North Vietnam Army infiltrators during the ‘Tet Offensive’ in 1969 at the Mac V compound at Tuy Hoa. Photo provided

“We’d fire on what we though were VC in the bush. Occasionally we would receive incoming sniper fire from the shore in return. I don‘t know if we ever got anything or not because we didn’t stop and check it out,” he said.

When he wasn’t shooting at VC in the bush he would tend bar at the bar in the MacV compound in Tuy Hoa.

Shortly after the “Tet Offensive” in 1969 Camps flew home from his second tour in Vietnam.

“I flew into the Air Force base in Tacoma, Wash. in a C-141 transport plane. We didn’t get a good reception. There were protesters at the front gate with signs that called us ‘BABY KILLERS,’ he said. I distinctly remember those ‘BABY KILLER’ signs.

“It was kinda true in a way. We didn’t intentionally kill babies, but if we were shot at we’d wipe out whatever shot at us. In Vietnam the enemy had children throwing grenades at G.I.s. You had no way of telling the good guys from the bad guys.”

“Once the ‘Tet Offensive’ hit we started pulling out of Vietnam. It was like we were giving up,” Camp said. “I don’t think the South Vietnams really wanted to deal with the military situation after ‘Tet.” They had been at war for hundreds of years and they had enough. I think every American Vietnam veteran feels like we didn’t have a good purpose for the war.”

When Camps returned to civilian life he went back to Miami and went to work for the airlines as an airline mechanic. He kept getting laid off because of the economy and the uncertainty of the airline business. Eventually he opened a TV shop of his own that he ran for 15 years. Then he joined the Post Office and put in another 15 years working for the federal government before he and his wife, Phyllis, retired and moved to Port Charlotte three years ago. 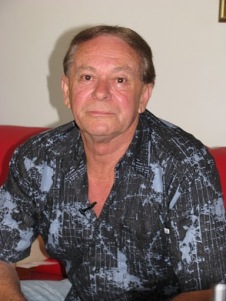 This story was first printed in the Charlotte Sun newspaper, Port Charlotte, Florida on Monday, September 6, 2010 and is republished with permission.