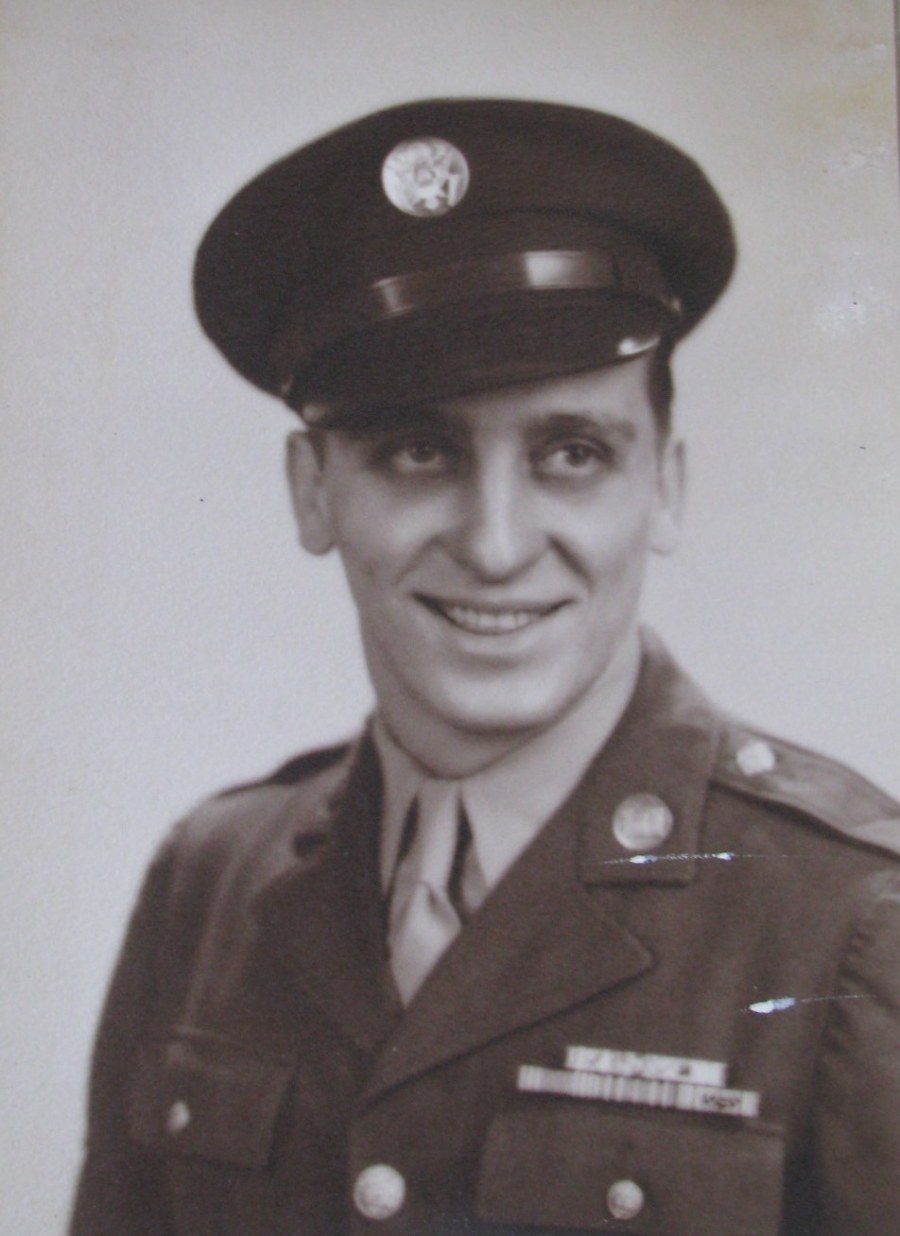 Back then: This is how Cpl. John Seelie of Englewood looked after returning from the Pacific Theatre of Operations during World War II. He served in the 25th Infantry Division at Guadalcanal and New Georgia after surviving the attack on Pearl Harbor. Photo provided

John Seelie of Englewood, Fla. was supposed to box the day the Japanese attacked Pearl Harbor, Dec. 7, 1941. He was a champion welterweight who just joined the 25th Infantry Division stationed at Schofield Barracks outside of Honolulu, Hawaii.

“I was a very good boxer. I never lost a match. “I weighed 160 pounds in those days,” the 87-year-old former soldier recalled.

“We were just getting up when the Japs attacked. We heard these planes coming in very low. We realized they were Jap planes when we looked out the window,” he said. “They were 75 feet off the ground. You could see the Japanese pilots’ faces clearly. The reason they came in so low over our barracks is that they were strafing the planes at Wheeler Field.

“Two waves of 50 planes each made an attack on Wheeler Field. It was right next to Schofield Barracks where we were. There were 188, P-40 fighter planes based at Wheeler. When the Japs were finished there were only two planes left on the runway,” Seelie explained.

“We grabbed our M-1 rifles and our redesigned steel helmets we had just been issued, a couple of .30 caliber machine guns and ran outside. We had no ammunition because it was all locked up to keep it away from saboteurs. We asked the sergeant to open the ammunition room, but he had no orders to do that. So we broke the door down to get to the ammo. We started firing at the planes. Whether we knocked an enemy plane down nobody knows,” he said.

“The rumor was that the Japanese had landed infantry all over the island. Our division was trucked up to the mountains and established a line of defense up there. That first night it rained like hell. I was on guard duty with my bayonet fixed hoping nobody came my way,” the old soldier said.

“For the next few days we were all sort of numb because the Japs had attacked us out of the clear blue sky. We knew the Japs were coming, but we didn’t know if they would attack Pearl Harbor or the Philippines first.

“Right after the attack our 25th Division started very intensive jungle training. From morning till night, 7 days a week we trained for six months,” he said. “Our next destination was Guadalcanal.

“Late in June we loaded aboard ships and with two destroyer escorts for protection we headed for Guadalcanal. It took us 33 days of zigzagging to get there,” Seelie said. “We landed on the island on Aug. 2, 1942 without opposition.”

The U.S. Marines and the infantry’s Americal Division had been slugging it out on Guadalcanal with the Japanese for three months when the 25th Division arrived. The reason this island was so important to both sides was its strategically situated air field the Japanese built on the 20-mile wide and 60-mile long island.

“The 25th’s job was to take Fort Austin, the most heavily fortified enemy position on the island. The Marines tried for three weeks and hadn’t been successful,” he said. “The Japs had all their heavy artillery up on the hill to protect (what the Americans renamed) Henderson Field below. 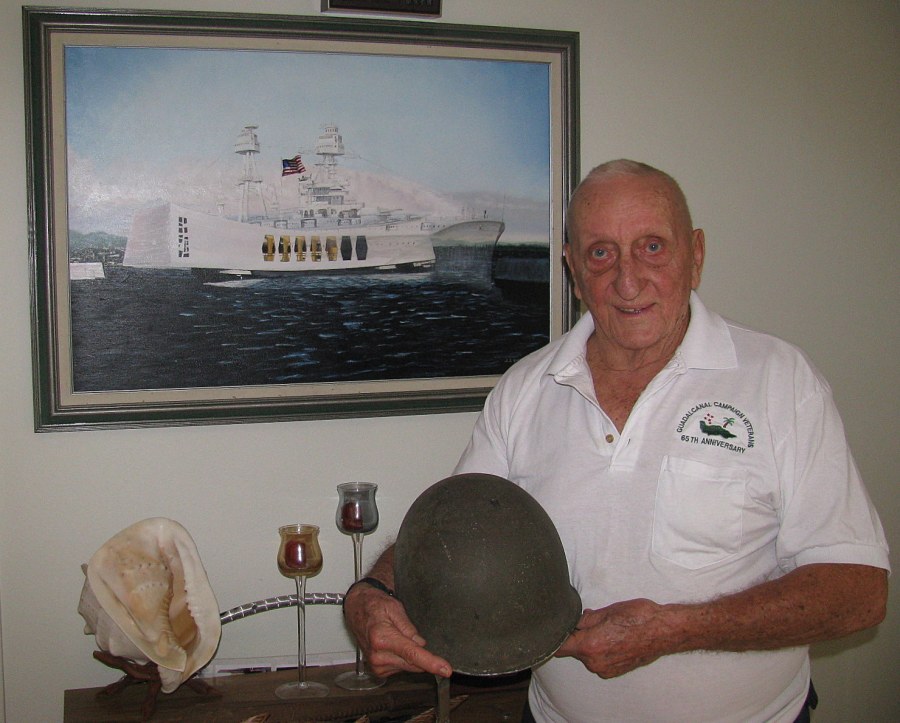 Link to the past: John Seelie stands in front of a painting he commissioned of the Arizona Memorial at Pearl Harbor with a ghost of the famous battleship in the background behind the memorial. He was at Scholfiend Barracks when the Japanese attacked 68 years ago. He’s holding the helmet he wore while serving with the 25th Infantry Division in the Pacific. Sun photo by Don Moore

“It took us three weeks to wipe out the Japs who were holding Fort Austin. I don’t think there was a Jap left alive. They had machine gun nests all over the mountain. We knocked ‘em out with tanks and flamethrowers,” Seelie said. “When it was over we had lost 237 men from our division and I have no idea how many wounded we suffered.”

One of his most exciting days on Guadalcanal was June 23, 1942 when a flight of 128 Japanese planes attacked the American positions on the island. An armada of American fighter planes was waiting for them.

“We cracked the Jap code and knew they were coming. They planned to soften up our positions and send more troops in to attack us,” he said. “There were at least 300 planes in the air over Guadalcanal. It may have been the biggest dogfight in World War II.

“I sat on the beach and watched it all. This one American fighter pilot shot down five Jap planes that day. Then he got shot down by our antiaircraft. He parachuted to the beach near where I was. You couldn’t believe how mad the pilot was about being shot down by friendly fire,” Seelie recalled. “He got hold of a Jeep, went back to the airfield and got another plane. He went up again and shot down two more Jap planes before the day was over. The pilot had become a fighter ace in one day at Guadalcanal.

“Near the end of our three months on Guadalcanal the Japanese who were left made a final daylight bonzai charge. Probably 175 of ‘em charged our lines with bayonets, knives, sticks, anything. We killed ‘em all in three minutes fighting,” he said.

American forces landed on New Georgia Island before the 25th Division pulled out of Guadalcanal and headed there, too. The division came ashore in “Higgins Boats,” wooden landing craft, without much enemy resistance.

“New Georgia Island was worse than Guadalcanal. Most of the island is muck. There was nothing solid about the island. Our tanks got stuck in the muck up to their guns,” he said.

“Although the battle only lasted 33 days, what made it worse than Guadalcanal were all the diseases soldiers contracted while on the island,” Seelie said. “I got malaria on New Georgia. That was the end of my war. I ended up in a hospital in New Zealand.

“I opened my eyes and looked up at this beautiful red-headed nurse trying to take my temperature. She looked like an angel to me. I though I’d died and gone to heaven,” he said as he smiled.

It took more than a year for Seelie to recover from 52 attacks of malaria. Before he began to mend his weight had dropped from 160 to 89 pounds. Shortly before he was released from the hospital he became a stateside MP. Not long after the atomic bomb was dropped on Hiroshima, June 6, 1945, Seelie was discharged from the service.

A half century later, in August 1992, he and a group of other American servicemen returned to Guadalcanal for the 50th Anniversary of the battle. About a dozen former Japanese soldiers who fought there also showed up for the ceremony.

“I still had no love for the Japs. However, before the ceremony was over we started talking to them and found out that the only reason they surrendered was because they were sick or wounded and couldn’t defend themselves. By the time we finished talking we realized they were the same as we were, just soldiers,” Seelie said.

This story was first published in the Charlotte Sun newspaper, Port Charlotte, Florida on Thursday, Dec. 17, 2009 and is republished with permission.