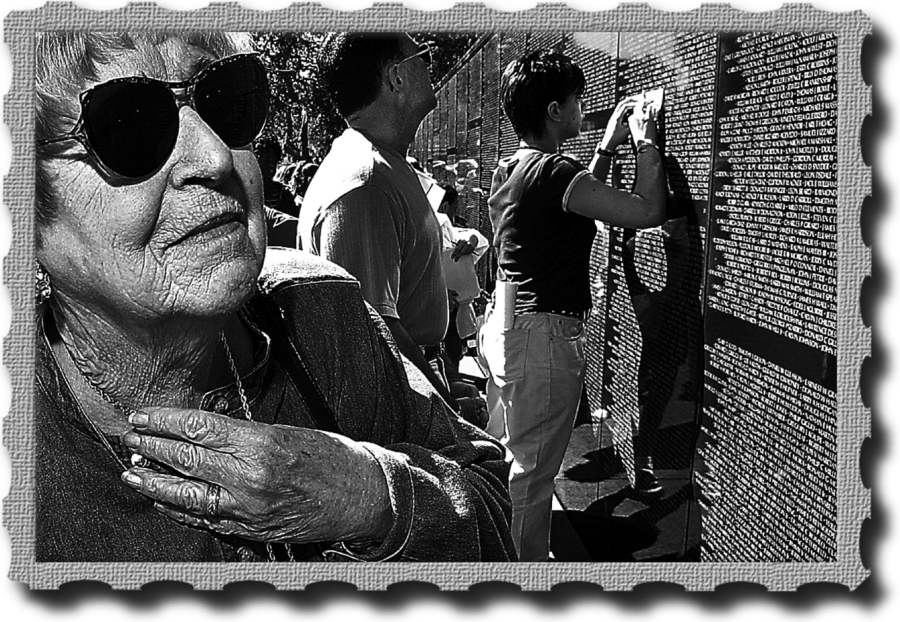 Gini Westfall of Port Charlotte, Fla. fingers her Gold Star Mother’s pin on her collar as she stands at her son’s name on “The Moving Wall” that came to Fort Myers, Fla. Her 21-year-old son, Bronson, was killed in Vietnam in June 1967. Photo by Chris Crook

She emerged slowly from the car with cane in hand and walked hunched over along a serpentine concrete path. At its end was The Wall.

The Wall looked like black marble. It was covered with 58,219 engraved names. Someone was reading each name on the wall into a big, black speaker slowly and distinctly one-by-one.

“Lawrence B. Prater, Teddy Lee Hisaw Jr., Charles A. Moyer, Daniel E. Hopper, Alvin P. Rivere,” a voice read out. Hundreds of school children and adults searched the wall for names of friends and loved ones.

As she hobbled onto the 8-foot-wide walk way that ran along in front of The Wall, Gini Westfall of Port Charlotte, Fla. was greeted by a Vietnam veteran in a black beret wearing a blue blazer, white shirt and red tie. He was talking to a group of a dozen middle school students about The Wall.

Dave McMichael, the vet with the beret, must have spotted the gold star on her collar. 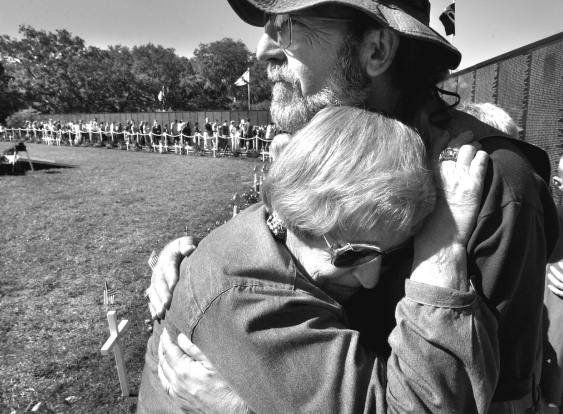 Greg Tonjes, a Marine Corps veteran of Vietnam, gives Gini a hug after finding her son’s name on The Wall. Sun photo by Chris Crook

“May I give you a hug?” he asked Gini, a stranger, as she walked past. He threw his arms around her and whispered something softly in her ear as they embraced for a few seconds before The Wall. When he released her there were tears in his eyes.

He composed himself for a moment. Then he  turned to the young people around him and said, “She is a Gold Star Mother. She is a very special person because her son was killed in Vietnam.”

Gold Star Mothers had their origin in World War I. It was a club no mother wanted to belong to, but thousands did. Gini has been one of them for 14 years.

Gini holds her Gold Star Mother’s pin and a free-form nugget pendant she had made out of Bronson’s high school graduation ring.  Sun photo by Chris Cook.

The five-pointed star on a field of blue in the center of a small round gold pin attached to her denim shirt told her tale louder than words. This Gold Star Mother lost Lance Cpl. Bronson Lee Westfall, U.S. Marine Corps, killed in action in Vietnam.

Gini was on her way to Fort Myers to find her son’s name on The Moving Wall that was in town for the weekend. It’s a three-quarter replica of the Vietnam Wall Memorial on The Mall in Washington, D.C. The Moving Wall travels the country.

When her son was killed in Vietnam at the age of 21, the family lived in Hampton, Va., outside Norfolk. Bronson graduated from high school there in 1965 and joined the Marines a few months later.

He was a Marine cannoneer. He had finished his year’s service in ‘Nam in June ’67, his mother recalled as she rode along on her way to Fort Myers to see The Wall. Bronson volunteered for another six months firing the Marines’ big guns on the front lines in Quang Tri Province. He was scheduled to be discharged from the service in December, just in time for a holiday wedding to his high school sweetheart, Debora Drum.

It was Halloween when a Marine Corps major showed up at the Westfall’s front door late one afternoon.

“My husband and I had gone to a dinner party that evening. We were trying to take a break from our problems at home. My mother was in the final stages of Alzheimer’s disease. We got someone to take care of her that evening.

“The major told the lady staying with my mother, ”I’m supposed to find them. But I’ll be back in the morning. Don’t tell them I came by,” Gini recalled. “The woman didn’t say a word.

“Sunday morning we got up and there was the major. I went into shock when he told us Bronson had been killed in Vietnam. My mother went out of her mind and had to be taken to the hospital,” she said.

They could have buried their son in Arlington National Cemetery outside Washington, D.C. However, they decided that he would rather be buried in a cemetery in his hometown of Hampton, Va., that he loved so much. That’s what they did.

“On the way to the cemetery, the funeral procession was lead by a Marine Corps staff car that held Bronson’s honor guard. An American flag flew from a bracket on the bumper of the car.

“I looked out the window and there was this little back boy standing on the curb. The 10 or 12-year-old boy saluted the flag as we went by. I’ll never forget it.”

The inscription on Bronson’s headstone reads:
Death answers so many prayers.
It is the soul unleashed
And the completion of a task well done.”

Lance Cpl. Bronson Westfall was killed in action while serving as a cannoneer with the 3rd Marine Division in Vietnam. Sun photo by Chris Cook

“That poem was written the day of my son’s death by his bride to be,” she said. “We put it on his gravestone.”

What are her feelings about the Vietnam War?

“I think probably when you start to ask why, you’re never going to get an answer. So I never did ask why. It was a fact and that was sad enough,” Gini said. “I could get very aggravated thinking about Bronson’s death, but that does no one any good.

“I feel better coming to see The Wall. It’s something you can do that’s almost tangible. Grief is a very personal thing with each person. Each person deals with it in their own fashion,” she said.

She hobbled off, weaving her way through the crowds of young people and adults on the walkway. She was following Greg Tonjes, another Vietnam vet sporting a beard and wearing a green canvas jungle hat and vest covered with Marine insignias. Tonjes had volunteered to find what she was looking for.

There it was at the end of Row 88, about three-quarters of the way down panel 28-E: “Bronson L. Westfall.”

Bronson L. Westfall’s name pops through the tracing paper after the paper is rubbed with a led pencil. Photo by Chris Crook

Tonjes took a piece of tracing paper and a #2 pencil. He placed the paper over Gini’s son’s name and rubbed the pencil over the paper ever so gently. Ghost-like, the name popped through the thin white paper in shades of gray.

He handed it to her. Then he gave her a long hug. The salt-and-pepper bearded Marine stepped back, spoke quietly to her and faded into the crowd.

For a long while Gini Westfall leaned on her cane, fingered the Gold Star Mother’s pin on her collar as she stared at her son’s name. She wouldn’t come close enough to the wall to run her fingers over his name. It was as if the wall was cursed.

Then she placed both hands on the handle of her crooked aluminum cane and seemed to block out the world around her as she looked intensely at the last name in Row 88—Bronson L. Westfall.

This story was first printed in the Charlotte Sun newspaper, Port Charlotte, Fla. then again in War Tales II and is republished with permission.

PORT CHARLOTTE, FLA. – Virginia ‘Gini’ L. Westfall, age 79, passed away on Feb. 12, 2004, at home. Gini was born Oct. 7, 1924, in Rahway, N.J. Gini married Manuel Westfall in 1945 and they lived in New Jersey until moving to Hampton, Va., in 1948. Gini and Manuel retired to the Port Charlotte area in 1976. Gini is preceded in death by her husband, Manuel, and son, Bronson. Bronson died Nov. 28, 1967, while serving in the Marines in Vietnam. Gini was a member of the Port Charlotte Garden Club and a volunteer for Meals on Wheels. Gini is survived by a brother, Evan T. Williams; two sisters, Margaret Giannie and Elizabeth Toth, all of Westfield, N.J.; Gini is also survived by two nieces, Linda Lea Magnuson of Atlanta, Ga., and Suzan Dahlenburg of Danville, Ill.; and a cousin, Thomas Hendrickson of Holland, Mich. A memorial service will be held at 2 p.m. Monday, Feb. 16, at Kays Ponger Funeral Home in Port Charlotte. A reception will follow at the Vel Gardens Condominium Club House.