Chief Warrant Officer-2 Mike Ware of Venice was a “Kingsmen” in Vietnam. He was a Huey helicopter pilot in ’68 who flew 101st Airborne Division assault troops into battle throughout that war-torn country. The “Kingsmen” is what they called themselves.

“I always wanted to be a pilot,” the 70-year-old retired aviator said. “A couple of Army recruiters got me into helicopter school in Texas right after high school. I started flying Hueys at Fort Rucker, Ala. while still a teenager.

“I arrived in country a couple of weeks before the ‘Tet Offensive.’ ’Tet’ was the largest coordinated enemy attack on South Vietnam military bases and cities by upwards of 100,000 North Vietnam Army Soldiers and Vietcong Guerrillas. It caused the South Vietnamese Government to fall.

“During ‘Tet’ we were flying every day. I started flying the streets of Saigon with my helicopter. We flew 10 ships at a time in downtown Saigon. We were flying troops into battle and taking them out with the wounded,” Ware recalled.

“I spent my first three months flying around Saigon and in the Delta. We had our last battle during ’Tet’ at the race track in Saigon. At that point I was just a new ‘Peter Pilot.’ I was the new guy sitting in the right seat with about 250 hours of experience. I didn’t know what was going on. My job was to take over the controls if the other guy got hit.

“We’d fly into Saigon in tight formation —10 helicopters, one after the other. If you were flying in the back of this group it looked like the planes were all stacked on each other. The rotor blades were coming so close to each other. It was unbelievable how close they were.

“Then our gunships would come down on either side of the Hueys and lay down their mini-guns and rockets. We had to stay right in line. If we got out of line we were subject to being hit by friendly fire.

“Then we moved our base to ‘Camp Eagle’ at Hue — the old imperial capital further north of Saigon. Our camp was part of a huge old cemetery. We thought the NVA wouldn’t bother us so much if we were living in the cemetery because they respected their ancestors. It turned out that wasn’t the case.

“We started doing secret single-ship insertions into the A Shau Valley in the Central Highlands controlled by enemy forces,” Ware said. “Our people would stay out their in the mountains for several days and then we’d go back and pick ‘em up.

“This was one of the most exciting times of my life. I was getting to fly and loving it,” he said. “The problem was it was during a war and I had to share the sky with bullets. But I was also able to rescue people.

“I was flying at 8,000 to 10,000 feet taking enemy flak from a .37mm gun. Shells from the gun would make little black puffs around us and causing our helicopter to bounce. I went up to 12,000 feet to get away from the enemy fire.

“Looking way down below us I could see the other two helicopters. About that time our gunship was hit by fire from a .51 cal. machine-gun nest perched on a nearby hill. It went down in flames.

“It was time for me to go to work. I dove down over our downed helicopter and came within 30 feet of the ground. We threw our rescue ropes out to the people in the downed helicopter. All five of them were clinging to the lines while dangling 250 feet above the ground. At the same time the enemy machine-gunner opened up on his helicopter, but somehow missed.

“The higher I hovered the closer I got to the .51 cal. enemy machine-gun on the mountainside. The only thing I could do was swing my helicopter toward the machine-gunner which reduced the helicopter’s profile. My co-pilot and I were looking right down the barrel of the enemy gun while the guys below us were getting themselves hooked up.

“My crew-chief and door-gunner were in the back with their knives. If the guys on the ground got into any trouble with the ropes they were to cut the ropes and we’d go. All I could do is sit there and hover while working my rudder peddle which moved the ship back and forth as tracer bullets wizzed by us.

“About that time my 20-minute fuel light turned on. I didn’t have enough fuel to get us back to base,” Ware recalled 50 years later. I decided to take the copter up to 7,000 feet with the guys dangling from the ropes below us. The additional altitude put us within the range of the 37-mm gun once more. The guys on the ropes were taking shrapnel from the enemy as they froze from the altitude.

“By the time we reached the Vietnam border I had burned through my fuel. I was out and was forced to land at the deserted U.S. Marine base at Khe San. I came in for a landing and the two guys on the bottom of the rope hit the ground hard and broke their legs.

Ware is taking it easy in Saigon during the Vietnam War. Photo provided

“I climbed out of my helicopter and walked back along the 250-feet of rope the guys had held onto to below us. As I pulled my helmet and gloves off the guys on the ropes were frozen and bleeding but laughing and giving me high fives. I’ll never forget it as long as I live. This was one of the best days of my life. I got these guys out of there.

They had to bring a Chinook chopper in from Camp Eagle to transport their Huey back to base because of its lack of fuel.

“That day was kind of a miracle. We ran out of fuel but landed safely, the guys we rescued dangled on 250-foot ropes while being shot at by a .51 caliber machine-gun, neither the men nor the plane were stuck by enemy fire.

“My co-pilot became an ordained minister after that rescue we made in Laos,” Ware recalled. As for Ware he just finished a book he hopes to publish which he would like to see turned into a movie. It’s called The Log Book.

After the war he flew helicopters in civilian life for large corporations in the northeast. He also flew his share of medical choppers. When not being an aviator for fun and profit Ware and his wife, Beth, are school teachers. He teaches high school classes and she is an art teacher. They have two daughters: Andrea and Adrian. 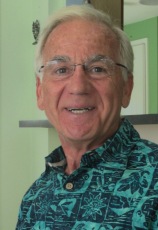 This story was first published in the Charlotte Sun newspaper, Port Charlotte, Fla. on Monday, April 16, 2018 and is republished with permission.