This was Angelo Yerace of Osprey, Fla. in 1944 when he was 21 after he served aboard an LCT landing craft tank both in Europe and the Pacific during World War II. Photo provided

Former Motor Machinist 2nd Class Angelo Yerace’s first taste of war came when he and the other 11 members of the crew of the LCT, Landing Craft Tank, he served on reached the beach at Normandy, France on Day 1 the historic invasion of Europe by Allied forces on June 6, 1944.

“Hundreds of dead American and German soldiers were still on the beach,” he recalled almost 75 years later. “On the way onto shore our ship hit a mine. We were maybe a mile off the beach when the mine hit. We tied up to the next ship with big ropes. The other ship helped get us closer to shore.”

When the tide went out Yerace’s LCT was left high and dry.

“We spent the next couple of days on the beach at Normandy with the Army waiting for a ride,” he said. “We sailed back to England and picked up another LCT and did it all over again.

“Then we took a load of men into Cherbourg, France. The Germans had blown up the harbor before they were forced out,” Yerace said.

Things after that for the 92-year-old Osprey resident are a bit fuzzy. He says he doesn’t remember “V-E Day,” when the Nazis gave up. It wasn’t long after that he was sent to Honolulu to pick up another LCT and take on the Japanese in the Pacific.

“We sailed around checking out a bunch of little islands in the Pacific to see if there was any enemy action on them. Most of the time we found none,” he said.

Yerace and the crew of the LCT weren’t there long when the Japanese surrendered.

“We started cleaning the place up after that. We took all kinds of junk the Navy didn’t want, took out 10 miles off shore and dumped it over the side. The Navy was scrapping a lot of office stuff.”

“I remember them telling us we had two weeks to get to Bainbridge, Md. where we would be discharged,” he said. “There were no planes or trains available. I took a Trailways Bus all the way from California to Maryland.

“When I got out of the Navy I first went to work as a brakeman for the Pennsylvania Railroad. I did that for a while, then I got a job as an auto mechanic at the local Chevrolet dealership. I worked there for 20 years.

“I was 42 or 43 when I quite working for Chevrolet and got into the school system. I worked on the school superintendent’s car. He told me they were opening a vo-tech high school locally and
I should apply to teach auto mechanics.”

“ I taught auto mechanics for 20 more years at the high school until I retired when I was 64,” he said.

In 2005 he and his late wife, Ailene, moved down to Florida. He has two daughters: Teresa and Pamela. 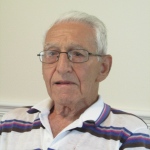 This story was first published in the Charlotte Sun newspaper, Port Charlotte, Fla. on Monday, Nov. 13, 2017 and is republished with permission.