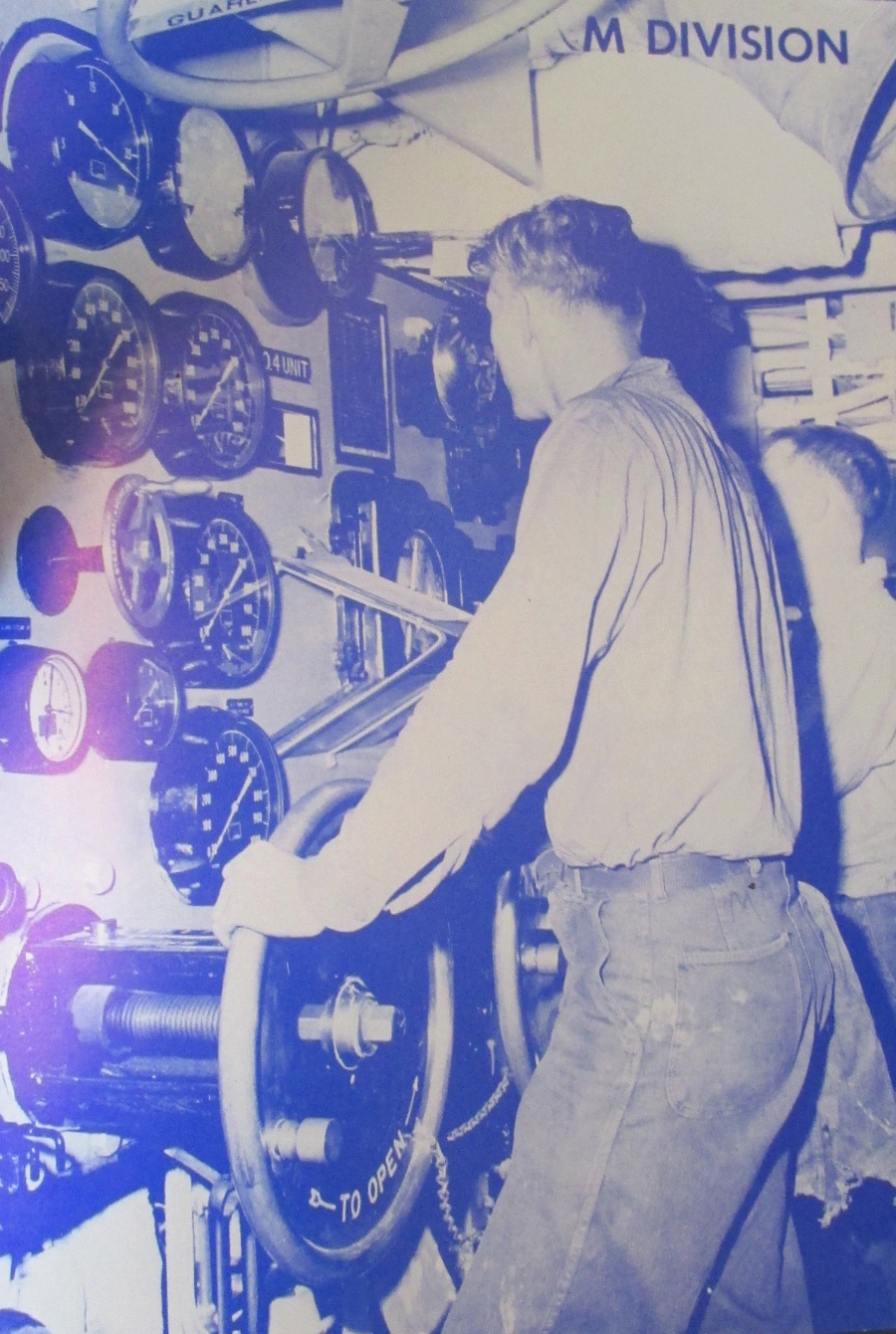 Mack is pictured on the throttle in the aft engine-room of the Essex Class carrier USS Ticonderoga in the 1950s. Photo provided 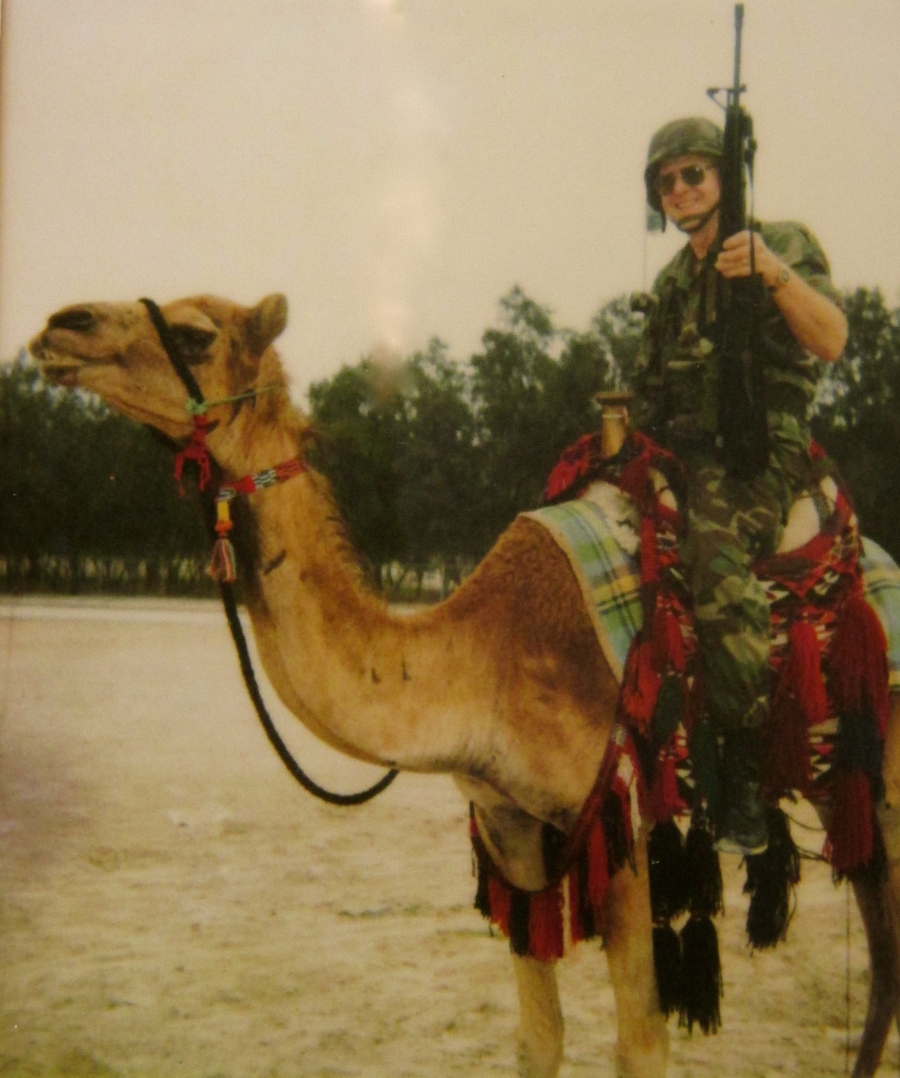 Sgt. Howard Mack astride a camel with his M-16 rifle in Saudi Arabia during ‘Operation Desert Storm’ in 1990s. Photo provided

Like millions of other young men before and after him, Howard Mack joined the Navy right out of high school. It was 1954, he was 18, and the Korean war had been over for a year.

After basic at Bainbridge, Md. he was assigned to Machinist-Mate School. Then he went aboard the World War II Essex Class aircraft carrier USS Ticonderoga being updated and refitted at the Brooklyn Navy Yard.

Their first port of call after leaving the navy yard and moving the carrier south to Jacksonville was Guantanamo Bay, Cuba.

“We sailed around the Horn and into the Pacific. We made San Francisco our home port,” the 79-year-old former sailor explained. “Our first real cruise was to the Mediterranean. We hit many of the countries in southern Europe on that outing.

“One of the two most exciting things that happened to us on that first cruise in the Ticonderoga was when the carrier went through a hurricane at sea. It was so bad it ripped some of the catwalks off the ship and we also lost some of our gun mounts. We had to strap ourselves in our bunks at night because the ship rolled so badly during the storm at sea.”

The other exciting sea adventure that involved Mack personally concerned the docking of the carrier in New York Harbor on its return from the Mediterranean.

“The harbor pilot was bringing the ship into Pier 88 in New York City and I was on the throttle in the aft engine-room. We got a call on the intercom for emergency back down. The pilot brought the Ticonderoga into the pier too fast and he was trying to slow the carrier down.

“You have to open the bypass doors and then hit reverse on the engines. You have to be careful you don’t shut the steam down too quickly or it will cut the engine off,” he explained. “The carrier took out a section of Pier 88. Luckily we didn’t hit another ship and no one was hurt.” 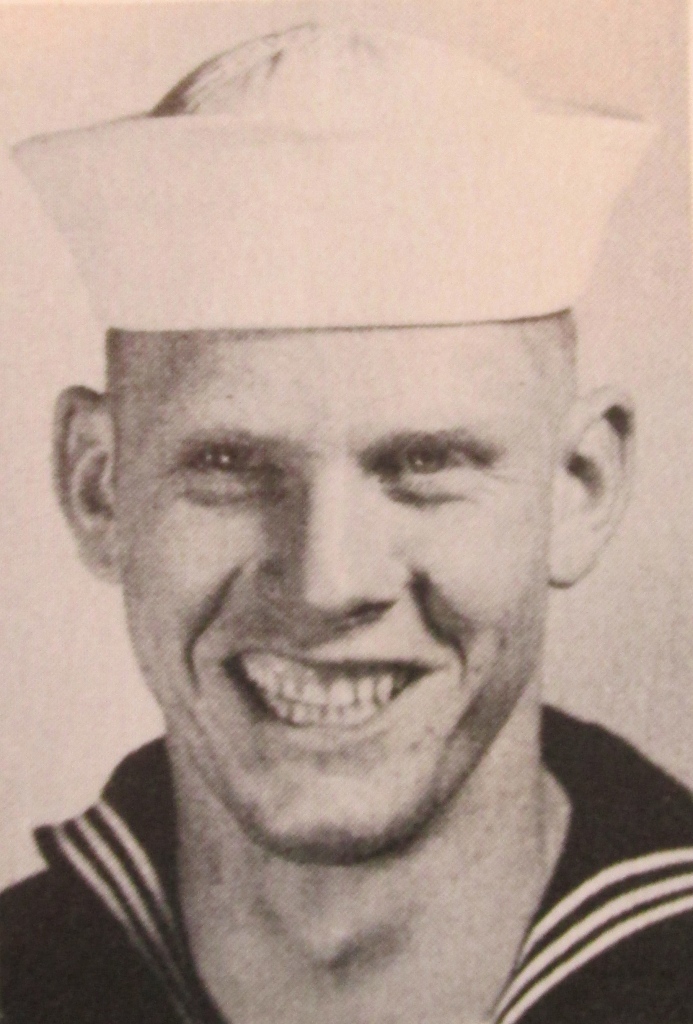 Mack when he was a new Navy recruit in 1954. He was 18 at the time and just getting out of boot camp at Bainbridge, Md. Photo provided

After three years in the regular Navy, Howard resigned and tried to join the Naval Reserve, but they wouldn’t have him because of his eyes. The reserve maintained his eyes were too poor even though he had been in the service for years.

He signed up with the Coast Guard and spent the next three years, during the Vietnam War, on harbor patrol aboard a 40-foot Coast Guard boat patrolling San Francisco Harbor. After his three year hitch in the Guard he moved back to New York.

Mack joined the Poughkeepsie Police Department. He retired as a sergeant 20 years later when he was 50.
About the same time he decided to re-up once more, but this time he chose the Army. He switched service branches again because the Army agreed to make him a sergeant the moment he joined up.

“I began working at the Reserve Center in New York City. After a short while I became a first sergeant and boss of all the instructors at the center,” Mack said. Then I became the head of an MOS (Military Occupation Service) training center in the Bronx. Finally I took over the training center in Brooklyn.”

His job was to teach sergeants how to teach newly inducted soldiers their military occupations. They taught cooking, nursing and many other military jobs to cadre who attended this school.

“On the day before Christmas 1990 I received a call from headquarters. I was told we had been activated for ‘Operation Desert Storm.’ I was also told I had five minutes to get my gear together and report,” Howard said. “We got our stuff together and ended up in Fort Dix, NJ. From there we took a C-5A (transport plane) to Spain. 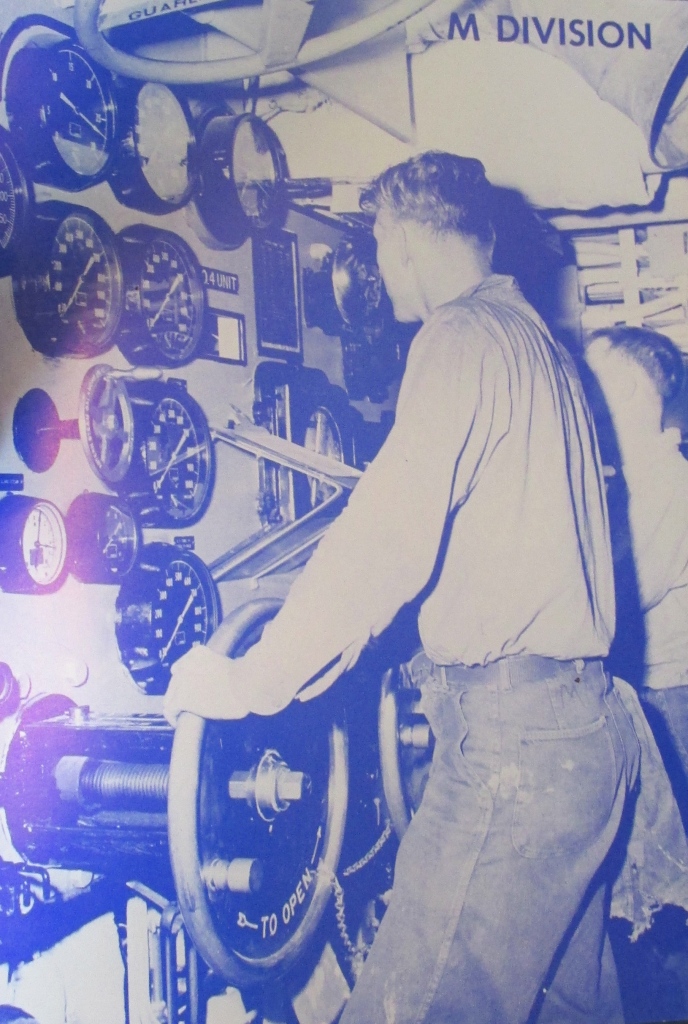 Mack is pictured on the throttle in the aft engine-room of the Essex Class carrier USS Ticonderoga in the 1950s. Photo provided

“We flew into Saudi Arabia at 3 a.m. on the last leg of our journey. We couldn’t see a thing and we didn’t know where we were. We were ordered onto Arabian buses and transported to our air conditioned barracks.”

The 411th Engineering Battalion, Mack’s unit, spent much of its time building schools and hospitals for the people of Saudi Arabia. The most exciting part of their four-month stay in the Middle East was when American Patriot Missiles failed to shoot down Saddam Hussein’s incoming SCUD missiles.

“One of those SCUDs got through and hit a barracks used by a Pennsylvania unit. Quite a few of them were killed. Our battalion had to clean up what was left. That was the worst part of being in the Middle East for me,’ he said.

Mack returned to his job in the Poughkeepsie Police Department and he returned to the classroom teaching sergeants how to teach military occupations to new recruits. This lasted about another year until he retired at 59 in 1993.
“We moved down to Englewood in the early 1990s. Later my wife, Marilyn, and I got an apartment in Venice at Waterside Village. We’ve been here 13 years.

The Macks have three grown children: Connie, Paul and David.

This story was first published in the Charlotte Sun newspaper, Port Charlotte, Fla. on Monday, April 28, 2014 and is republished with permission.