Jack Bohan of Englewood was a 23-year-old petty officer 1st class in 1953 when this picture was take near the end of the Korean War. Photo provided

Jack Bohan of Englewood, Fla. was a 23-year-old petty officer 1st class in 1953 when this picture was take near the end of the Korean War. Photo provided

“I was discharged from the Navy after my first hitch in early April 1950. Eight weeks later I was recalled and went aboard the USS Bache (DD-470) as a 2nd class petty officer when the war broke out in June 1950,” he said. “The Bache was part of a carrier task force based in Key West.

“Every time we conducted anti-submarine warfare you could bet the Soviet Navy would be out there in submarines watching us. We were told not to confront them, just work around them.

“One day, off the coast of Key West, our sonar operator picked up a good sized blip he though was a Soviet sub. He reported it to the captain and the captain reported it back to headquarters on the beach. He was told to stay with the blip.

“For the next day-and-a-half we followed it not having any idea what it was. About that time what we thought was a Russian submarine surfaced. It was a big whale. We took a lot of heat for that one.

“Life aboard a destroyer, when there’s no war going on, can be awful dull. The guys on the carriers have smooth sailing and lots of ping-pong and games. The guys on the ‘tin-cans’ have lots of ups and downs in the waves. However, when the opportunity presents itself the average sailor knows how to take action to dissipate his boredom.

“The only way we knew how long we were going to be at sea was the amount of scotch the skipper brought aboard the Bache. This particular time he ordered a case of scotch–12 bottles. 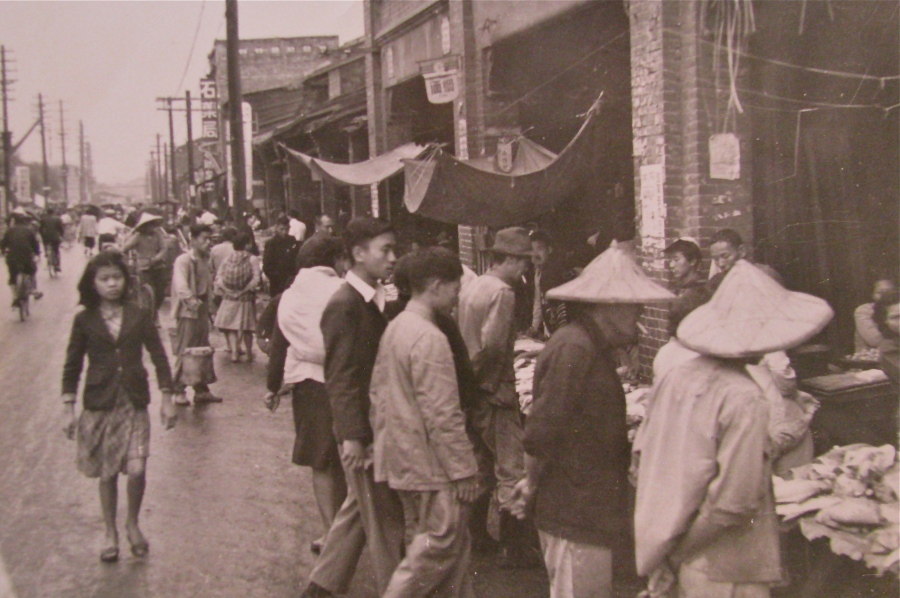 He was working for the CIA in 1965 when he took this picture in Kobe, Japan. Jack was in communications at the agency. Photo provided

“His scotch was delivered and sat on deck beside the gangplank next to the officer of the day. The O.D. was called aft for some reason. The moment he left, a three-foot wide air scuttle next to the scotch opened up and two big hairy arms came out of the scuttle, wrapped themselves around the scotch and the bottles disappeared below deck. Then the scuttle was closed again.

“When the O.D. returned to his post the scotch was gone. The captain was furious. He pulled in the gangway and locked down the ship. Then he told the master at arms to search every inch of the Bache.”

It could have been a chapter out of Herman Wouk’s book “The Cain Mutiny.”

“No trace of the scotch was ever found.

“It was the ingenuity of the people in the black gang that accounted for the captain’s missing scotch. They broke the wooden case containing the scotch down into a pile of chips and dumped them in the screw shaft. The shaft was turned into a garbage disposal.

“Each bottle of booze was wrapped in a protective bamboo covering in the case. They took all 12 bottles and dropped them into the ship’s main fuel tank in their bamboo covers. When they wanted a drink they took a long wire hook they manufactured, fished around with the hook in the tank and brought up a bottle of scotch.

“When we went back to sea, the black gang was the happiest group of sailors aboard our destroyer,” Bohan said with a smile.

“I loved the USS Bache, but I was transferred to basic intelligence school in San Diego in 1951 and after that reassigned to the Military Air Transport Service headquartered in Hawaii.

“I became part of a C-54 transport’s crew that flew wounded soldiers and marines from Korea to Tokyo and on to Hawaii,” he explained. “I served in the 1453rd Medical Evacuation Squadron. My job was to assist the nurses aboard the flight any way I could.

“Sometimes while in the air I debriefed some of the wounded for intelligence purposes on their flight back to the hospital.

“One thing I will never forget about those flights was the smell of gangrene. Those planes were padded on the inside and you could never get the gangrene smell out of the padding no matter how hard they tried to disinfect it.

“When the American POWs were released from North Korea in 1953 they were flown to Japan and then on to Hawaii. I was standing on the tarmac in Honolulu when the first ones flew in.

“What sticks in my mind was the demeanor of those officers and enlisted-men who came off those airplanes. You could see how grateful they were to be back on U.S. soil. They kissed the runway when they got off. ”

This was an R & R Area for officers and their wives on the beach at Tansui, Formosa in 1955. Jack was working for the Naval Auxiliary Communication Center at the time. Photo provided

Bohan returned to the States in 1954 and was discharged from the Navy. He got a civilian job for a while he wasn’t happy with.

“For a short while, before I got out of the Navy, I worked for the Office of Naval Intelligence. While there I made some contacts with Central Intelligence people,” he said. “This one CIA guy gave me his card and told me if I ever wanted to work for the agency to give him a call.

“I made the call to my CIA buddy and six weeks later I was working for the them. I was sent to Camp Perry, Va., a reactivated World War II Seabee training base the agency had taken over years later.

“They showed us how to conduct all kinds of intelligence operations. We were shown how to collect and analyze intelligence. You learned what intelligence was and what it wasn’t.

“The other side of the operation was the CIA’s clandestine service. These were the people who went around bugging other people and did all kinds of throat cuts and hatchet jobs,” Bohan said.

He spent the next 7 1/2 years employed by the CIA all around the world. Initially he was stationd at a communication center in Taiwan. The first couple of years he worked as a junior communications officer passing secret messages here and there while collecting intelligence.

The rest of his CIA duties are cloaked in secrecy.

At the end of Bohan’s tenure with the CIA he was in Washington, D.C. It was there he became involved in a program to find out if there was any interest among West Point cadets in going into the intelligence branch of the Army.

“I signed on for two years to become a military instructor at West Point. Two days a week I taught an intelligence course to a dozen or so cadets,” he said.

“While teaching at the Point in ’63 President John Kennedy give a speech to the graduating class and handed out some diplomas. The president arrived with a larger entourage than expected.

“After his speech he and five helicopters full of people, who flew in with him, attended a party at Gen. William Westmorland, the superintendent’s home. Because they weren’t expecting so many people they ran out of canapés to serve with their cocktails.

“The word went back to the chef in the general’s kitchen, who happened to be an Army sergeant, that more canapés were needed. He lacked the ingredients to make the finger food and was forced to improvise.

“At this point, the non-coms’ ingenuity clicked in. He found 10 cans of cat food in the general’s pantry. He dumped all 10 cans into a big bowl, added some chives and stirred up the concoction.

“I didn’t eat any of the cat food canapés, I just heard about them from another non-com who was in the kitchen when they were being prepared.” Bohan said. “The chef got a wonderful response from the president and members of his group who gobbled ’em up.”

Before he left his teaching post at West Point, Bohan put in applications for a job with the Defense Intelligence Agency. He was hired and stayed with the agency 29 years until he retired and moved to Florida.

“I began by working in Photo Analysis. It was a wonderful job,” he said. “It was Photo Analysis that found the Russian missiles aboard the Soviet freighters in 1962 that caused the Cuban Missile Crisis.”

He and his wife, Dee, moved to their home in Englewood Isles in 1989. The couple has five children: Tom, Michael, Richard, Kay, and Isaiah.

This story was first published in the Charlotte Sun newspaper, Port Charlotte, Fla. on Wednesday, Nov. 6, 2013 and is republished with permission.

Click here to view Bohan’s collection in the Library of Congress.