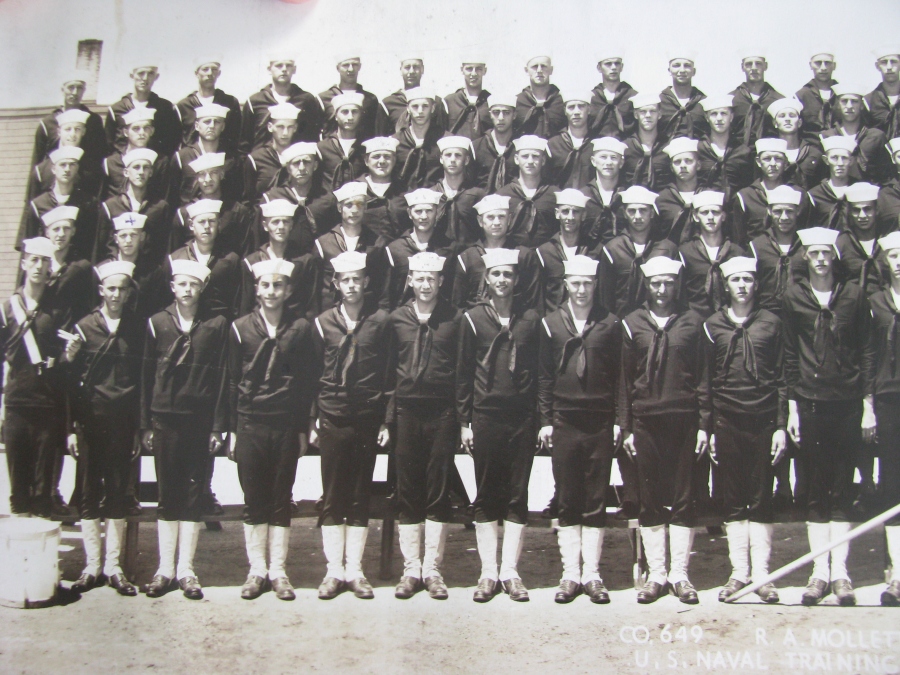 This is part of Max Jones' graduating class at Great Lakes Naval Training Center outside Chicago in 1944. He's the swabbie in the second row the second from the left. Photo provided

Max Jones’ life expectancy in World War II could be measured in minutes. He trained to be a back-seat gunner on twin .30 caliber machine-guns in a Grumman TBM “Avenger” Torpedo Bomber.

“My life expectancy was four minutes in combat in the back seat of that TBM. However, I didn’t find that out until I got out of the Navy,” the 86-year-old former seaman who now lives in Punta Gorda said.

“That torpedo bomber carried one ‘fish.’ When they made their dive on a target they had to slow down do drop their torpedo. When they got real low they dropped their ‘fish,’ then turned upward and when they did they were like sitting ducks. They got hit by enemy fire.

“I quite high school in the 11th grade in 1944 and joined the Navy.  After basic at Great Lakes I went to a Navy technical training center in Norman, Okla. From their I went to Seattle, Wash. where I was supposed to board a ship for the war zone,” Jones recalled 70 years later.

“Uncle Harry dropped ‘The Bomb’ and saved me from going to war. I would have kissed him if I could have caught up to him. He saved millions of lives by dropping that atomic bomb.”

“A lot of people complained about Truman dropping the bomb. They didn’t stop to think what would have happened to us if we had had to invade Japan. It would have been a slaughter,” Jones said.

After the end of World War II, the teenaged sailor was sent to Japan as a member of the occupation force.

“I never fired a shot at the enemy,” he said.

“I shipped out on a troop ship to Okuskia, Japan. It was a little sea port along the coast of Japan,” Jones recalled. ” There was a big Japanese battleship anchored there. They sent it to Bikini Atoll and blew it up during an atomic bomb test after the war.

“I was supposed to go aboard an aircraft carrier at Okuskia, but I missed it. So I ended up by being a Navy stevedore. Much of our time was spent unloading Navy ships in the harbor at Okuskia,” he said.

While in Okuskia he made a half dozen or so trips ashore. It was interesting for a young sailor far away from home for the first time.

“I remember that the people in Japan were really nice. With a couple of cartons of cigarettes you could get anything you wanted ashore,” Jones said. “I’m a fisherman, I grew up along a river back home in Indiana. While in Japan I went fishing and caught a couple of little white fish I gave away to a local fishermen who were using cormorants to fish with.

“I also bought a Japanese army rifle that was still packed in cosmoline in a big warehouse with thousands of other
enemy rifles. I brought it all the way home in my sea bag and gave it to my older brother. Unfortunately he put it in his garage which had a leaky roof. The rifle got wet and ruined.”

After working as a stevedore, Jones was assigned to a Navy repair ship: Delta-AR-9. The crew of this ship kept LSTs afloat.

“We sailed for Shanghai, China. We arrived in the port of Shanghai and anchored beside a concrete ammunition ship
that made us a little nervous,” he said. “China was a nasty, nasty place. The people in China don’t care anything for human life. 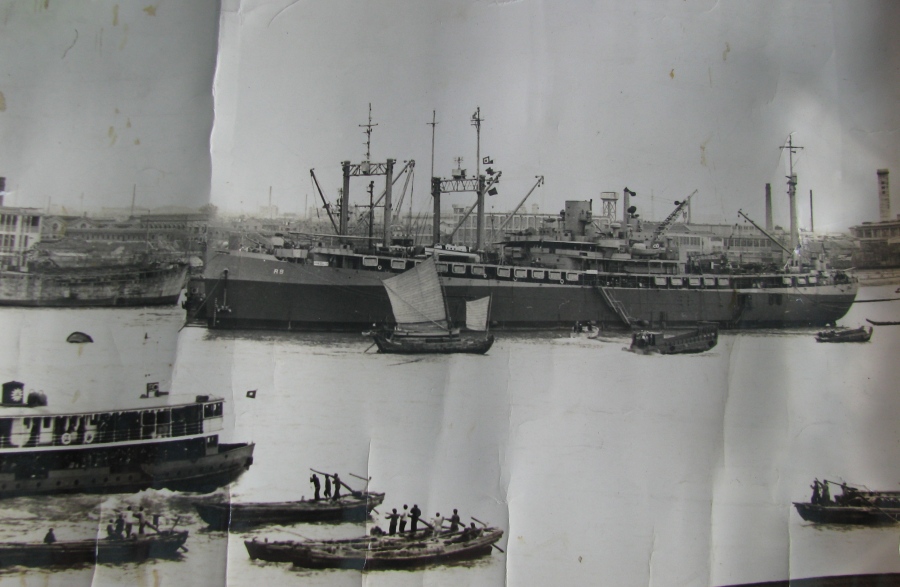 The Delta-AR-9 is the large ship anchored in the middle of Shanghai Harbor, China in 1945. Max Jones of Punta Gorda
was a seaman serving aboard the repair ship. Photo provided

“There were dead girl babies floating in the river that emptied into Shanghai Harbor. People who lived on sampans had baby girls they’d throw her overboard. They have no use for human life.

“It was a nasty country. On the way out of Shanghai the last thing I saw was a man floating in the river with his hands wired behind his back and his head blown off. It was a horrible sight,” Jones said.

“On the way back to San Diego, Calif. we ran across a floating mine in the Pacific. It was the only thing I got to fire at that was the enemy’s. The boys on the ship tried to detonate it with small arms, but couldn’t explode it with their M-1 rifles. I opened up on it with my 20 millimeter gun and blew it up,” he said.

“From San Diego we went through the Panama Canal and up the East Coast to Philly where I was discharged. I was 21 and took a train back home to Muncie. It was 1946.

“I decided I didn’t like the ice and snow up north and came south to Punta Gorda in 1950. I was living in an old ‘tin-can’ trailer in what is Lashley Park today,” Jones said. “I was living in the park when the old Hotel Punta Gorda Hotel caught fire in August 1959 and burned to the ground. It was made of pine and there was no way to keep it from burning.”

Built in 1888 the old hotel was the meeting place along Florida’s west coast in 1900 for the likes of Thomas Edison, Henry Ford and Harvey Firestone, the Vanderbilts. They would come to south Florida for the winter season and became the talk of the town.

At one point in the 1960s Jones managed the Garden Gate garden supply store located at the corner of Harbor andU.S. 41 in Port Charlotte. He ran the store for 16 years.

“I watched Port Charlotte being built. I use to go duck hunting on the sand flats that formed what is now Punta Gorda Isles,he said. “In those days there was nothing there but sand.

Anita, Jones’ wife of almost 50 years, died 15 years ago. His daughter, Cindi, is a real estate broker in the Naples area.

This story was first published in the Charlotte Sun newspaper, Port Charlotte, Fla. on Monday, Sept. 23, 2013 and is republished with permission.