Sgt. 1st Class Billy Reid (second from the right back row) is pictured in Vietnam with Capt. Hugh Shelton (center back row) commander of a Special Forces A-Team in Ha Thahn, Detachment 104 in 1967. Shelton became Chairman of the Joint Chief of Staff, the highest ranking officer in the U.S. military. Photo provided

Billy Reid was born to be in the 101st Airborne, the “Screaming Eagles,” and an Army Ranger in Vietnam. He followed in the footsteps of Claude and Joe, his older brothers, who were paratroopers in the Korean War. Claude also saw action in Vietnam with the 5th Special Forces.

Billy forged his mother’s name and joined the Army in 1955 at 17. He went to boot camp at Fort Jackson, S.C.

From there he was sent to ordinance school at Aberdeen Proving Ground in Maryland to become an ammunition storage specialist. It was boring and uneventful so he got out of the service after three years.

That didn’t last long, two months later he re-upped and was sent to Fort Benning, Ga. where he joined the 101st Airborne, the “Screaming Eagles.” In those days the 101st and the 82nd Airborne jumped from airplanes. Today only the 82nd jumps, the 101st is air mobile and flies into battle in helicopters.

“When I got out of jump school with the 101st I was a corporal assigned to the 8th Infantry Division headquartered in Germany,” Reid said. “I spent my tour in Germany and when I returned to the States I got out of the Army once again.

“The second time I signed up for the Army, after a few months as a civilian, I decided to join Special Forces because my oldest brother, Claude, was in the 5th Special Forces,” he said. “I was sent to Vietnam and when I arrived I told them, ‘I want to be where the action is.’ They sent me to an I-Corps base camp at Ha Thahn as a member of A-Team 104 in 1967.”

When Reid received this letter from Gen. Hugh Shelton he was about to be appointed Chairman of the Joint Chiefs of Staff, the highest ranking officers in the U.S. military. Photo provided

The Special Forces base camp was in the jungle and Billy’s team consisted of a company of Montagnards, the indigenous people of the country, and two companies of South Vietnamese soldiers. There was a detachment of artillery in the camp and a caribou twin-engine supply plane that flew into their landing strip hacked out of the jungle.

In the bush Special Forces sent two members of a five-man A-Team consisting of Intelligence, medical, communications, demolition and weapons specialists into the jungle at a time. They led a 250-man company of Montagnard soldiers.

“We gave the Montagnards uniforms and put red scarfs around their necks. We armed them with cast-off American rifles,” the 74-year-old North Port resident said. “They were very good jungle fighters. The Montagnards hated the Vietnamese, both North and South.

“To prove to them we were good soldiers, too, we drink a cup of warm blood from a water buffalo they had just slaughtered. It was their way of making sure a Special Forces soldiers was one of them.

“There was a small village about 15 miles away from our base camp. Our intelligence suspected it was being infiltrated by North Vietnamese. They sent us to check it out.

“Our mobile strike force went out on patrol and set up at night too close to the village. I think some of the villagers told the Vietcong where we were. The next morning we started to cross a nearby river and got ambushed by the enemy,” Billy said.

Billy Reid looks at a plaque he received for serving in the Mobile Strike Force, a Special Forces unit, in Vietnam from August to December 1967. Sun photo by Don Moore

“We had an artillery forward observer calling in artillery fire for us. He had a long antenna attached to his radio. I told him to use his short antenna because the big one could be seen to easily by the enemy.

“He paid no attention to what I told him. A short time later Lt. Katz was hit in the shoulder by enemy fire. Lt. David Hicks, one of our platoon leaders, was also wounded, and I got shot in the foot.

“The forward artillery spotter, who wouldn’t listen, was hit in the head. We put him on a helicopter, but he died en route to the hospital.

“Our lead platoon element fought their way across the river. The rest of the company made it across, too.

“We called in air strikes on them, Napalm. We killed a few of the V.C. I don’t recall how many we lost,” the old soldier said.

“At Ha Thahn we had a young captain named Hugh Shelton who was our Special Forces A-Team leader. He was an outstanding officer who had us doing something all the time, Billy said. “Later he became Chairman of the Joint Chief of Staff, the top officer in the military.

“Our intelligence reported a nearby mountain trail was being used by the NVA (North Vietnamese Army) and the V.C. to transport military supplies into South Vietnam. Two of us in Special Forces took a company of South Vietnamese soldiers out on a mission to take a look.

“Just as we reached the trail our point man was killed by enemy fire. We called the forward air controller to put heavy ordinance on the enemy. We didn’t stay around to see how many we killed. 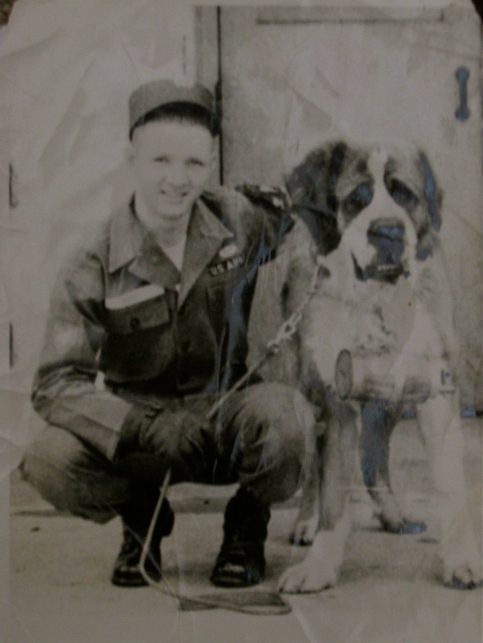 Pvt. Reid was the 19-year-old “Soldier of the Month” in 1957 at the 101st Airborne’s base in Fort Campbell, Ky. His job was to tend to “Jumper,” the division’s St. Bernard mascot. Photo provided

“At a place called Quang Ngai we had to call in ‘Spooky’ to finish off the NVA and V.C. ‘Spooky’ was a twin-engine C-47 transport plane quipped with Gatling guns. ‘Spooky’ opened up on them and killed 27 of the enemy. We brought the enemy weapons back to our camp.”

Billy returned to Vietnam on a second tour. He was asked to teach a course to conventional Army troops how to survive a year’s service over there. When he returned to Special Forces headquarters at Fort Bragg, N.C. he was given the opportunity to do something entirely new.

He was sent to the Berlin Brigade where he worked for three years as an undercover intelligence officer. What he did for the U.S. Army is a military secret he doesn’t talk about.

After Berlin he returned to Fort Bragg for 18 months until his retirement in 1976 after 21 years. He retired as a master sergeant.

After his military service, Billy went to work for General Electric for 16 years at a plant where they built engines for the B-2 “Sprit” stealth bombers. Most of the time he worked in security at G.E.

This story was first published in the Charlotte Sun newspaper, Port Charlotte, Fla. on Monday, July 15, 2013 and is republished with permission.

Click here to view Reid’s collection in the Library of Congress.