At 18, James Friel was on liberty in Honolulu with the rest of the fleet during World War II. Photo provided

It was pitch dark 64 years ago this past week, when Seaman 1st Class James Friel of south Punta Gorda, Fla. jumped from the fantail of the USS Walke (DD-416) into Iron Bottom Sound at Guadalcanal after his destroyer was hit by a Japanese torpedo.

The positive outcome of the naval battle involving Adm. “Bull” Halsey’s fleet at the canal and the victory by U.S. ground forces on the island helped tip the balance of power and the outcome of the war in the Pacific during World War II.

Friel, an 18-year-old seaman, wasn’t thinking about the outcome of the battle when he and his buddy, Mack McLaughlin, abandoned ship that night so long ago.

“Mack wanted to jump with his shoes on. He didn’t want to take his shoes off because he just purchased them a couple of days earlier,” the 83-year-old former sailor said. “I told him, ‘It’s gonna be hard to swim with your shoes on.’ Mack finally took them off.”

“We were firing like hell at the enemy ships and all of a sudden we came to a screeching halt. We were hit by an enemy torpedo,” he said.

“The fantail of our ship went up in the air as we climbed out of the turret in a hurry. We could see fire forward,” Friel said. “The order was given to abandon ship. The sea was just like glass.”

At sun up on Friday the 13th, 1942 Halsey’s force had clashed with Rear Adm. Hiroaki Abe’s fleet off Guadacanal the day before. The Japanese commander was ordered to bombard Henderson Field on Guadacanal with his ships. A division of 12,000 Japanese infantrymen were also to be put ashore from four transports. These soldiers could have changed the outcome of the battle, which had been raging for three months, in Japan’s favor if the plan had been successful.

By the time the sun set, five American ships were lost on the first day and a number of Japanese vessels had gone to the bottom, too. The Walke was part of a task force sent the following day to energize the U.S. Navy’s position in the engagement off Guadacanal.

The Walke was the lead destroyer in the task force consisting of the battleships, USS South Dakota and the USS Washington together with the destroyers: Preston, Benham, Gwin and Walke. The six ships sailed into battle when the Washington fired on the cruiser Sendai, some 18,000 yards away, at 11:17 p.m. Nov. 14. The South Dakota followed suit.

The sea battle centered off the north coast of Guadalcanal.

Twenty minutes later, the Preston was badly damaged by enemy gun fire and the skipper had to abandon ship. Ten minutes after that, the destroyer sank and with it 117 sailors and the captain were lost.

Gwin was the next U.S. destroyer hit. It was struck in the stern and badly damaged. Many more sailors were lost.

This was Seaman Friel late in the war after his ship had been torpedoed and he was serving as an aviation mechanic in Fort Lauderdale, Fla. Photo provided

At 11:38 p.m., a Long Lance torpedo hit the Walke’s magazine and blew off the bow. What was left of the ship burst into flames. As the stern sank, the Walke’s depth charges exploded killing more of the men who had just jumped into the sea. By the time the crew was rescued, five officers, including the captain, and 76 seamen were dead.

A few minutes after the Walke went to the bottom, the USS Benham was also hit by a Long Lance torpedo. It managed to stay afloat as the crew fired at the enemy ships with limited mobility.

The battleship South Dakota was having electrical problems and had sustained minor damage from enemy shells. The USS Washington was the last undamaged battleship remaining. It was the only American ship standing between Guadacanal and what was left of the Japanese fleet.

After putting the enemy battleship out of action, the Washington was confronted with six enemy ships. It fought them to a standstill for several hours until the enemy retired and the American battleship steamed for home.

By that time, Friel and his buddies from the Walke had been in the water for hours.

“I was wearing a life belt I had to inflate myself when I abandoned ship,” he recalled. “There was oil and debris in the water, but nothing large enough to cling to. We were all just swimming in the dark and trying to keep together.

“Sometime during the night a Japanese submarine surfaced near us. It shined a blue light on us as we dove underwater with our life belts on. It didn’t bother us and eventually it submerged again,” he said.

“A while later a Japanese battleship explodes after being shelled by the Washington and the South Dakota.”

Friel said there was five sailors in his group swimming off an island three or four miles waiting for help to arrive. No one panicked and everyone was keeping his wits about him as they did their best to stay afloat.

They watched American fighter planes attacking all four Japanese transports filled with enemy troops. Then the destroyer, USS Meade, turned its guns on the transports setting them on fire. The 12,000 soldiers aboard these four ships might have turned the tide in Japan’s favor if they had reached Guadalcanal.

Sometime the next morning, Lt. James Jarman, flying a P-39 Airacobra fighter, spotted the wreckage of the Walke and sailors swimming in the sea below him. He checked by radio and was advised there were no American sailors in need of rescue. Moments later he was ordered not to attack because a number of American sailors were unaccounted for.

At that point he flew over the Meade, which was still shelling the enemy transports, and fired his guns in the direction of the sailors in need of rescue. The destroyer’s captain understood what Jarman was shooting at and followed the fighter toward the sailors in the water several miles off shore.

“We could see the Meade heading toward us,” Friel said. “When she pulled up beside us she dropped a Jacobs ladder over the side for us to climb up on. It was all we could do to climb the ladder after 14 hours in the water. 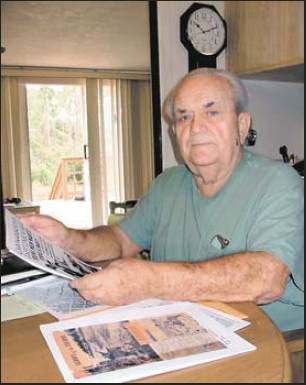 Former Seaman James Friel of south Punta Gorda looks at an article about the naval battle off Guadalcanal in November 1942 that helped change the outcome of World War II in America’s favor. Sun photo by Don Moore

“They got us aboard ship and leaned us up against the bulkhead on deck. The injured sailors were taken below,” he said. “The Meade rescued 150 Walke sailors from the water that day and another 116 from the Destroyer Preston that sunk just before the Walke. The Meade was still rescuing sailors when a Japanese Zero strafed the ship as it flew over. Three sailors aboard the destroyer were killed in the attack.”

Friel was one of the lucky ones. He was taken back to Tulagi Island aboard the Meade. He transferred into naval aviation, was trained as an aviation mechanic and was reassigned to the Naval Air Station at Fort Lauderdale where he served out the rest of the war.

This story was first published in the Charlotte Sun newspaper, Port Charlotte, Florida on Monday, Nov. 20, 2006 and is republished with permission.