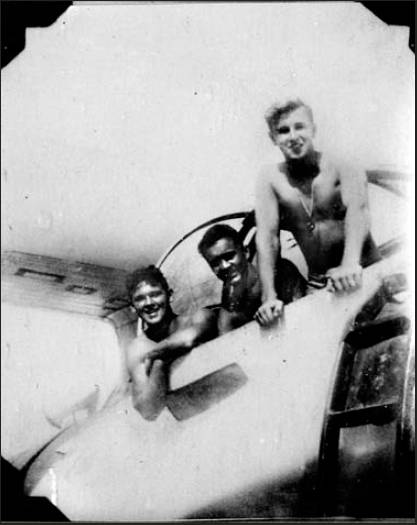 Dick Brown is the sailor at the left smiling from a PBY “flying boat” with his two buddies, Manuel Rodriguez from Texas and Art Loveland of Pennsylvania on Saipan Island during World War II. Photo provided

Dick Brown thought he was going to be an 18-year-old naval aviator in 1944. He quickly found out the military had more young flyboys than it needed.

The 80-year-old former sailor ended up in charge of two quad 40-millimeter anti-aircraft guns on the port side of the aircraft carrier USS Intrepid, (CV-11). The ship had just returned to San Francisco during World War II when he went aboard.

Brown served on the Essex Class carrier when she saw action at the Battle of Leyte Gulf, Iwo Jima and Okinawa. He was aboard the Intrepid when she was hit by Japanese kamikazes at Leyte and Okinawa that put the 872-foot-long ship temporarily out of commission.

“I climbed out of the back of an Navy truck in San Francisco during the late summer of 1944, and there at the pier was the biggest ship I’d ever seen in my life. It was the USS Intrepid,” the old salt recalled. “She was in port for repairs. I went aboard and was assigned to a 40-millimeter anti-aircraft gun. I was a 3rd Class Petty Officer put in charge of these guns.”

A few days later the Intrepid sailed for Pearl Harbor. The carrier was loaded with extra planes and equipment headed for the fight in the Pacific.

The fleet, which included the Intrepid, sailed out of Pearl headed for the Philippines. In early September it attacked Japanese airfields in the Palau Islands and a few days later struck more airfields in Mindanao. By mid-October the Intrepid was threatening enemy installations on Leyte.

“On Nov. 25, 1944, we were hit by a couple of kamikazes within two minutes of each other during the Battle of Leyte Gulf,” Brown said. “The first kamikaze hit the aft part of the flight deck. Fortunately I was on a gun at the other end of the ship.”

A number of officers and men were killed in the twin kamikaze attack. However, the carrier held her position in the task force during the historic air battle of Leyte Gulf and managed to put the fire aboard ship out in two hours. 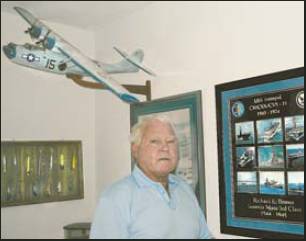 Dick Brown was in charge of two 40-millimeter antiaircraft guns on the port side of the aircraft carrier USS Intrepid during World War II. The framed pictures are of the Intrepid. He also flew as part of a PBY “flying boat” crew, like the one above his head, late in the war. Sun photo by Don Moore

After the battle subsided, the Intrepid sailed for Pearl Harbor and eventually San Francisco for repairs. She arrived on the West Coast on Dec. 20, 1944, and two weeks later the carrier was ready for sea once more.

“We reached the war zone in time for the Battle of Iwo Jima. As I recalled, there weren’t any big problems for our carrier at Iwo, but that wasn’t the case when we moved on to Okinawa,” Brown said. “Four or five kamikazes would attack us at a time at Okinawa. Some would come in high and others would attack low.

“I remember this one time when the battleship New Jersey was off our port at Okinawa and we were firing our 40-millimeters at two kamikazes that flew low between our two ships,” he said. “I have no proof we fired into the New Jersey trying to shoot down the kamikazes, but I’m reasonably sure we did.”

Planes from the Intrepid flew ground-support missions hitting Japanese installations on Okinawa. Two weeks into the 82-day battle the carrier was struck by another kamikaze that hit its flight deck. Eight Intrepid sailors were killed in the suicide attack and 21 were injured.

“When the kamikaze pilot’s plane hit, he rolled from the cockpit of his destroyed plane onto the deck. By the time he stopped rolling there wasn’t much left of him,” Brown said.

The kamikaze attack put the Intrepid out of service a second time. It headed for Pearl Harbor and on to San Francisco once more for repairs. The carrier arrived back in the states on May 19, 1945. Approximately six weeks later it returned to sea and the battle in the Pacific with Brown aboard.

“When we got back to Pearl they took me off the ship and sent me to Guam by plane,” Brown said. “It was mid-July, and I was only on Guam 24 hours when I was flown to a seaplane base at Saipan,” he said. “I ended up on a PBY ‘flying boat’ flying air-sea rescue missions. We were looking for B-29 bomber crews who crashed at sea during their raids on Japan.”

Shortly after Aug. 6, 1945, the day Lt. Col. Paul Tibbets dropped the first atomic bomb on Hiroshima from a B-29 called “Enola Gay,” Brown’s PBY crew members learned about the super bomb from a nearby Marine Corps unit on Saipan.

“The Marines told us,” he said. “We had dropped the damnedest bomb anybody had ever heard of on Japan.”

A few days later World War II was over.

After the war Brown took the G.I. Bill, graduated from college and in 1952 accepted a teaching and coaching position at Venice-Nokomis High School. For the next 27 years he would be an assistant football coach and head baseball and basketball coach at the high school.

After retiring from teaching he started Gasparilla Charters, a sport-fishing business he ran out of Gasparilla Marina in Placida. Brown and his charter boat crews fished the waters of Charlotte Harbor primarily, but sometimes fished as far south as Fort Myers.

He and his wife, Gerri, live in Rotonda. Brown still has the ceiling of his garage filled with spin-fishing outfits ready to take on the big one lurking in local waters.

This story was first published in the Charlotte Sun newspaper, Port Charlotte, Fla. on Monday, May 28, 2007 and is republished with permission.