Seaman 1st Class Martin Warnke is pictured in his hometown newspaper with an accompanying story that notes he had taken part in five invasions at that point in World War II. Photo provided.

Martin Warnke of Port Charlotte, Fla. was a spotter on a 20 millimeter anti-aircraft gun aboard landing craft (LST-66) that brought troops ashore at 15 major invasion beaches in the Pacific during World War II.

The two incidents he remembers best during his service in the U.S. Coast Guard in the Second World War were watching Gen. Douglas MacArthur wade ashore at Leyte and the time the Japanese kamikaze pilot obliterated one of the 40 millimeter anti-aircraft guns on the ship’s bow during the height of the battle on their second trip ashore at Leyte in the Philippine Islands.

“We were there when MacArthur came ashore. It was a phony deal. The bow doors of the LST next to ours opened up and out stepped MacArthur who waded ashore at the head of a crowd. Cameramen were standing on the beach with their movie cameras taking pictures of him as he reached the beach,” the 85-year-old Port local man explained.

“He got on the radio and told the world, ‘I have returned.’ Then he left the area and we went back to war,” Warnke said. “Our first trip to Leyte on D-Day plus 1 went smoothly. It was the second trip that hurt. 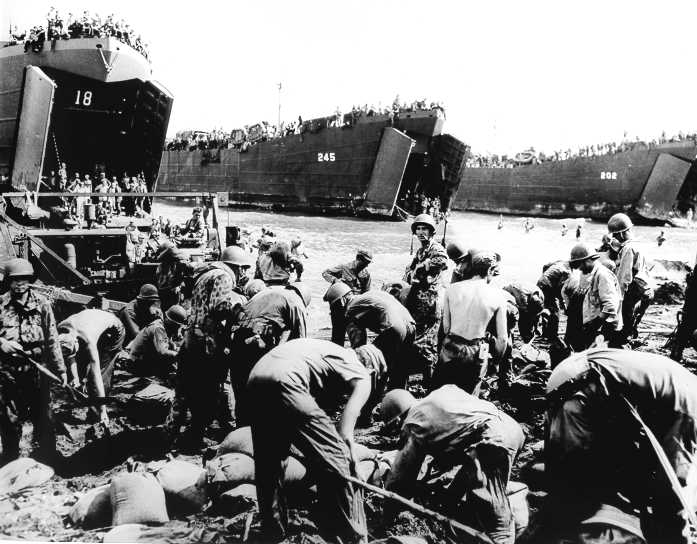 LST-66 is shown in this Coast Guard photo depositing troops on the beach at Leyte, Philippines during the height of the fighting in the Pacific during World War II. Photo provided

“After we unload our troops on the beach we returned to New Guinea and picked up another load of soldiers and headed back to Leyte. It was on this second trip back when we were hit by a kamikaze pilot just off the beach,” he recalled.

“The Jap zero came over the mountain and hugged the ground until it reached the ships. All of a sudden it appeared. I was a pointer on a 20 millimeter anti-aircraft gun along the railing of LST-66. The suicide plane went right over my head and hit the 40 millimeter anti-aircraft gun on the port side of our ship up front. It was aiming for the control tower on the ship, but hit the gun impalement and killed all the Coast Guardsmen manning the 40 millimeter gun.

“The enemy plane damaged the entire side of the ship. It took us until late that night to put the fire out. By this time 28 Coast Guardsmen had been killed aboard ship,” Warnke explained.

Despite the damage the Coast Guardsmen aboard LST-66 continued to unload soldiers and supplies onto the beach at Leyte. Then their battered ship headed back to dry-dock at New Guinea.

“We missed the invasion of Iwo Jima because our LST was being repaired,” he said. “However, we made it in time for the Okinawa invasions.”

The Coast Guard crew of LST-66 is pictured on its deck. The photo was probably taken in New Guinea during a lull in the fighting. Martin Warnke is in the sea of white caps. Photo provided

The men aboard the battered LST survived the biggest Pacific island battle of World War II without further damage. Before they wrapped up the war they took part in the last invasion at Ballkapan, Borneo in July 1945.

Here are the major battles LST-66 took part in during World War II:

* The Saidor occupation and landings in January and February 1944.

* The Hollandia operation in April and May 1944.

* Leyte Invasions and Douglas MacArthur in October and November 1944.

* Manila Invasion, capital of Philippines, on D-Day minus 1

* Invasion of Zamboange in the Southern Philippines in April 1945

LST-66 earned eight battle stars for eight major invasions and the Navy Unit Commendation for its service to the country during the war. The crew of LST-66 downed eight enemy air craft and flew eight Rising Sun Flags on its conning tower signifying the Japanese Zero fighters and Betty Bombers it splashed.

It never made the surrender ceremony because it was too battered to make the trip to Tokyo Bay. The ship was decommissioned on March 26, 1946. LST-66 was sold to Kaiser Company Inc. for scrap after the war.

Warnke reached the States before war’s end and spent the remainder of his time in the Coast Guard stationed at San Diego, Calif. He was discharged in April 1946 and took the G.I. Bill.

After graduation from college he joined his father’s insurance company where he remained the rest of his working life. He and his wife Dolores moved to Deep Creek 20 years ago. They have four children: Robert, William, Thomas and Debbie.

This story was first printed in the Charlotte Sun newspaper, Port Charlotte, Fla. on Thursday, March 31, 2011. It is republished with permission.