1st Lt. Marcella Zaborac of Englewood, Fla. is pictured as an Army nurse in her mid 20s during World War II. She served with the 110 Evacuation Hospital in Europe.

1st Lt. Marcella Zaborac of Englewood, Fla. came ashore on Normandy beach in August 1944 with Gen. George Patton. She served as a nurse with the 110th Evacuation Hospital in “Ol’ Blood-N-Guts” 3rd Army that fought its way across France and into Germany during World War II.

Growing up in the Texas Panhandle, Zaborac graduated from nursing school at Lubbock General Hospital in Lubbock, Texas. She received her RN degree in 1941, just in time for the Second World War.

The biggest challenge facing the members of the 110th  Evacuation Hospital was keeping up with Gen. Patton and his troops.

“He was moving fast across France,” she said.

“When we started across France with Gen. Patton the rainy season had started. By the time we reached Luxembourg it was raining almost every day. There was mud, mud, mud everywhere,” Zaborac said. 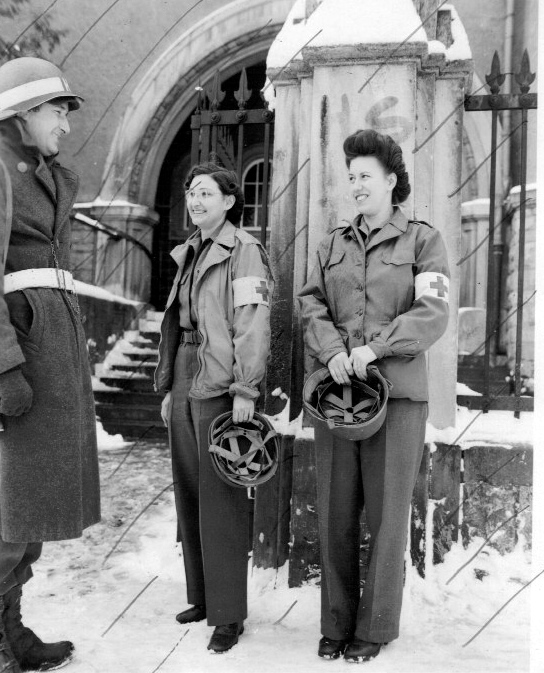 Lt. Marcella Zaborac (center) and fellow nurse Lt. Helen Anderson of Duluth, Minn talk to Pfc. Maurice Neiming of Birmingham, Ala., a guard outside the front gate of the 110th Evacuation Hospital in Esch al Vet, Luxembourg during the winter of 1944.

Our army took over an abandoned three story school building in Esch al Vet which was a big improvement over the tents we had been caring for our soldiers in,” she said. “It was much warmer and drier in the stone building than in the tents.

“The weather grew increasingly terrible. In addition to the rain and mud it started sleeting and then came the snow. By December we had a couple of feet of snow on the ground and the temperature was the coldest recorded for Western Europe in 50 years,” the 90-year-old retired nurse recalled.

Zaborac said the nurses found living quarters in what had been Gestapo headquarters in Esch al Vet.

“When the Battle of the Bulge began in mid December at Bastogne, Belgium, about 50 miles away, we were the only American hospital in the area,” she said. “We got all the patients from the Bulge.

“These young soldiers were coming into our hospital in terrible shape. We did what we could for them and if they were transferrable we sent them on to a general hospital further behind the lines. If they weren’t, we kept ‘em and nursed them until they were,” Zaborac added.

“Conditions at our hospital in Esch al Vet started getting out of hand when we became overloaded with patients around the 20th of December. From then until New Year’s it was work day and night,” she said. “I remember working 24-hour shifts for a short time during the Battle of the Bulge until we got more medical help in the hospital.”

How did Zaborac and the rest of the doctors and nurses handle the stress of treating one young soldier after another who was missing an arm, leg or was dying from a stomach wound or badly burned?

“Thank God we were young. I think that was the thing that saved us because we didn’t realize how bad it was,” she said. “Furthermore we didn’t have time to think about it. We had to take care of our patients. You knew you had come to do this and you did your work.

“As fast as we patched up a patient we tried to move him out in 24 hours or less. There would be another young soldier waiting to take his place in the surgery room or on one of our cots in the hospital.

“Thank God I was 24. I would have never made it,” Zaborac observed.

Marcella Zaborac looks at a table full of letters from John, her late husband, sent her while he was recovering from injuries sustained stateside while flying as a radio operator in a B-24 bomber during World War II and she was serving as a nurse in the Army Nurse Corps in Europe. Sun photo by Don Moore

Following the Battle of the Bulge, she developed a serious cough. Doctors at her evacuation hospital decided that conditions were too primitive for her where they were headed. They were about ready to hit the road again and go back into tents. She was reassigned to the 202nd General Hospital in Paris.

“I was station there as a floor nurse until I went home,” she said. “I came home by way of New York City on a troop transport with thousands of other military people returning from the war. They put me on a train and shipped me back to Iowa where I was discharged in Nov. ’46—almost three years to the day from when I enlisted.

“My husband, John, was waiting for me. He had been a radio operator and gunner on a B-24 bomber. He was injured stateside and never went to war. John was also one of my patients. We got married in January 1944, before I was sent to France,” she recalled with a smile. “We were married for 61 years until his death in 2005. We had three children. Two years after his death I moved down here to stay with my daughter (Melissa Cripps) in Englewood.”

How does Zaborac feel about her service in World War II?

“I was happy I could serve my country and help my fellow man, my boys. I don’t think I was overly patriotic, but I am glad I did what I did,” she said with conviction.

This story first appeared in the Charlotte Sun newspaper, Port Charlotte, Fla. on Monday, March 1, 2010  and  is republished with permission.

Marcella Lee Zaborac, 97, died Monday, July 17, 2017. She was born on February 6, 1920 in Shattuck, Oklahoma, to Oscar and Nina Baysinger Rector. She graduated in 1936 from Follett High School in Follett, Texas. After graduating from Lubbock Sanitarium School of Nursing in 1940, Marcella worked as a RN at the Shattuck Hospital.

She enlisted as a 2nd Lieutenant in the Army Nurse Corps on November 24, 1942 and was assigned to the 110th Evacuation Hospital. After field training in California and Washington, her unit was shipped to England to prepare for the invasion of Europe. Assigned to General George Pattons 3rd Army, she came ashore in Normandy on August 25, 1944. During her 15 months overseas, Marcie, as she was known to her friends, served in Army hospitals in France and Luxembourg. Returning to the United States, she was discharged from active duty on January 13, 1946.

On January 22, 1944, Marcella married John F. Zaborac in Oklahoma City, Oklahoma. To this marriage were born three children; John, Jr., Charles Jerome (Jerry) and Melissa. The family lived in Cuba, Illinois and later on the farm in Farmington, Illinois. After retirement, she and John lived in Canton, Illinois and Englewood, Florida. Marcella was a registered nurse for more than 40 years.

She is survived by her son, John, Jr., her daughter, Melissa, granddaughters Amy and Marni and great-grandchildren, Cash and Cora. She is preceded in death by her husband, John, in 2005 and her son, Jerry, in 1968.

Graveside services will be held in Canton, Illinois at a later date.